In the statement, the MINREX recalls that the administration of former President Donald Trump had issued this same classification on June 2, 2020, as a preliminary step for the inclusion of Cuba in the State Department’s list of state sponsors of terrorism. 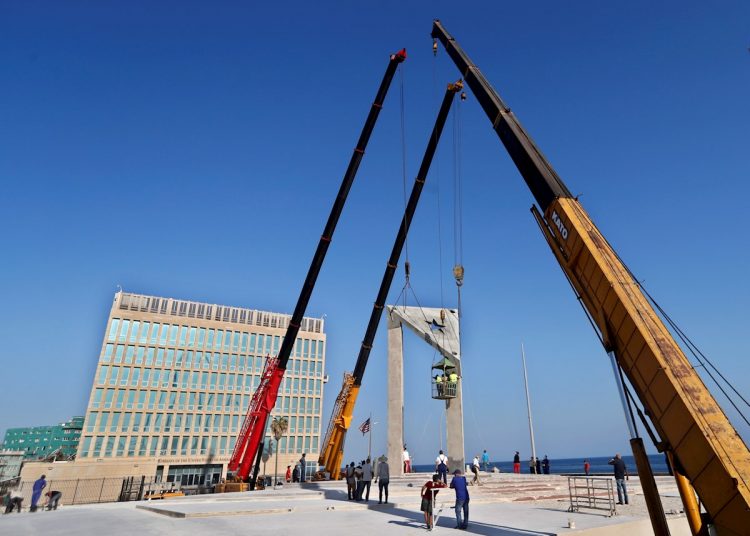 Concrete flag being placed at the Anti-imperialist Tribune in Havana, in front of the U.S. embassy in Cuba. Photo: EFE/Yander Zamora/Archive.

The Cuban Ministry of Foreign Affairs (MINREX) this Thursday rejected Cuba’s classification in the list of countries that do not fully cooperate with anti-terrorism efforts, ratified by the U.S. State Department.

In its statement, the MINREX recalls that the administration of former President Donald Trump had issued this same classification on June 2, 2020, as a preliminary step for the inclusion of Cuba in the State Department’s list of state sponsors of terrorism, published on January 11.

.@Cubaminrex rejects, in the strongest possible terms, the US State Department’s certification of Cuba as country that is not cooperating fully with the US counterterrorism efforts, published by the Federal Register of that country on May 25, 2021.https://t.co/aRwfrWEnWP pic.twitter.com/HCEq0T5bla

“This is a totally unfounded accusation and used for political purposes, which tries to justify the attacks against Cuba, including the inhuman economic, commercial and financial blockade suffered by our people,” the statement denounced.

Likewise, the Cuban Foreign Ministry rejected the U.S. government’s “unilateral and selective practice” of creating arbitrary lists regarding terrorism, which it describes as “lacking legitimacy” and contrary to “International Law and the Charter of the United Nations.”

The Cuban government also denounced that the island has been the victim of 713 terrorist acts organized, financed and executed mostly by the United States, and affirmed that these actions have cost the lives of 3,478 people, caused disabilities in some 2,099 and supposedly an economic loss of 181 billion dollars.

The announcement, made public two days ago, was received by Havana as “a totally unfounded accusation and used for political purposes that tries to justify the attacks” against it, including the economic embargo.

The Cuban executive criticized the refusal of the U.S. authorities to cooperate in the fight against terrorism, reflected in the fact that “they have never returned to our country a single fugitive from Cuban justice, nor have they even tried any of them for the crimes and terrorist acts.”

Washington alleged that the measure responds to the presence in Havana of members of the Colombian National Liberation Army (ELN) guerrilla group, who arrived in 2017 to continue peace negotiations with the government, which began in Quito.

When these talks were broken, Colombian President Iván Duque asked Cuba for the extradition of the guerrillas, something rejected by Havana by affirming that the protocols of the peace talks would be violated.

In this regard, the Caribbean country reiterated today that it “maintains its commitment to the peace process in Colombia, despite being the victim of repeated unfriendly and dishonest, politically motivated acts.”