A company official informed OnCuba that the measures are based on violations of the platform manipulation policies and the artificial amplification of information. 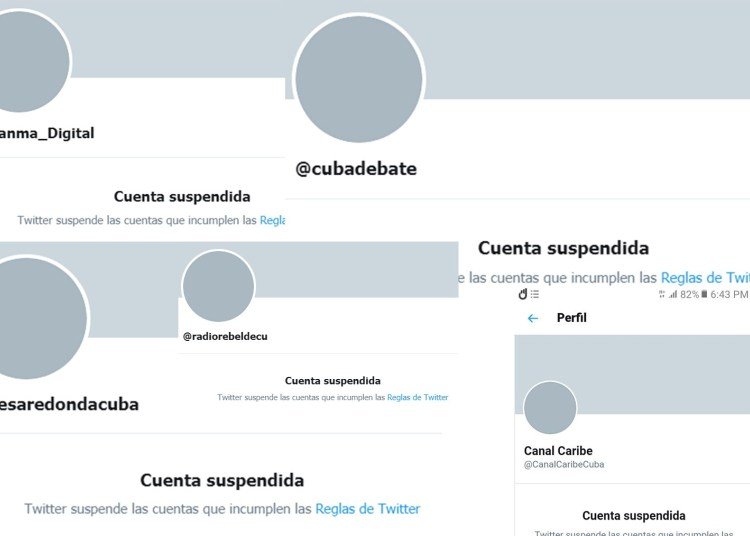 Twitter suspended the accounts of the main Cuban news media, as well as that of some journalists and officials, for considering that they “violate” the policies on the use of the platform, one of its executives confirmed to OnCuba.

The Director of Global Communications of Twitter, Ian Plunkett, shared with OnCuba through an email the actions that the company considered as violations by the suspended official accounts of the Cuban media and some journalists and officials.

Among the platform manipulation policies that were considered infringed are those related to the artificial amplification of information through several accounts at the same time.

You can’t artificially amplify or disrupt conversations through the use of multiple accounts. This includes:

-Overlapping accounts: operating multiple accounts with overlapping use cases, such as identical or similar personas or substantially similar content;

-Mutually interacting accounts: operating multiple accounts that interact with one another in order to inflate or manipulate the prominence of specific Tweets or accounts; and

Some of the “fake exchanges” alerted by the company include “publishing identical or substantially similar Tweets or hashtags of multiple accounts that a person operates; participating (retweets, likes, mentions, votes in the Twitter survey) repeatedly with the same Tweets or accounts of several accounts that a person operates; and coordinating or compensating others to participate in an artificial exchange or amplification, even if the persons involved use only one account,” the company warns.

As to whether they will be restored soon or any other information on the subject, the executive simply replied: “We’ve nothing further to share at this time.”

The Union of Journalists of Cuba (UPEC) rejects that there were violations by the accounts and denounced that they were suspended simultaneously shortly before this Wednesday’s appearance of the Cuban president on national television.

“We demand that the blocked accounts that in no case have violated Twitter’s policies be reestablished immediately,” UPEC said in the statement.

Eugenio Martínez Enríquez, General Director for Latin America and the Caribbean of the Cuban Ministry of Foreign Affairs, wrote a tweet directly to the company’s CEO, Jack Dorsey, who has visited the island before, to ask for an explanation about what happened.

Dear @jack Dorsey: You' ve visited #Cuba some months ago. Yesterday your company simultaneously suspended dozens of cuban journalists twitter accounts, while the President of #Cuba @DiazCanelB was making a national presentation. Could you kindly tell us what happens? @Twitter pic.twitter.com/v79Eb1QIQD

Martínez emphasized the fact that Dorsey had visited Cuba in previous months and in a second tweet invited him to send him a private message if he thought it more convenient.

Dorsey has not given a public statement on the issue.

In his personal account (recently hacked), he maintains among his main tweets one of 2018 that explains: “We have witnessed abuse, harassment, troll armies, manipulation through bots and human-coordination, misinformation campaigns, and increasingly divisive echo chambers. We aren’t proud of how people have taken advantage of our service, or our inability to address it fast enough.”

Why? We love instant, public, global messaging and conversation. It’s what Twitter is and it’s why we‘re here. But we didn’t fully predict or understand the real-world negative consequences. We acknowledge that now, and are determined to find holistic and fair solutions.

U.S.-Venezuelan lawyer Eva Golinger said that the media “expressing Cuba’s voice” were censored on Twitter and asked if “now Twitter has the power to silence an entire country and cut them off from communicating with the world?”

The most important media outlets from Cuba – expressing Cuba's voice – have now been censored by Twitter with no explanation. So now Twitter has the power to silence an entire country and cut them off from communicating with the world? https://t.co/qRV66NBGva

Among the suspended accounts are also those of foreign media correspondents such as of Russia Today in Spanish, Oliver Zamora Oria.

Camilo Condis, one of the most followed and active Cuban users on Twitter, considered “unfortunate the inclusion of official media and Cuban officials” in the suspension of accounts.

“While many of us fight on Twitter for the guarantee of freedom of opinion and expression, for the same reason we must support the right to these official Cuban media and official journalists to have their presence on Twitter,” Condis told OnCuba.

This Thursday Twitter suspended the accounts of former Cuban President Raúl Castro and his daughter Mariela Castro, a deputy and director of the National Center for Sex Education (CENESEX), after blocking the day before the island’s main media, which described the measure as an “act of mass censorship,” EFE reported.

In addition, other accounts such as those of René Gonzales were also deactivated.

Although Twitter explained that the suspension would be linked to violations of the terms of use, other users who are not linked to state media were also suspended, such as the case of independent journalist Aynel Martínez.

Martínez, who previously worked at Cubadebate and today is the director of the independent CubaLite media, considers these actions as an “act of censorship.”

“I haven’t published any content that violates Twitter’s policies, or at least I think so. I don’t think there’s any raison d’être for this censorship,” he said.

In a second contact with Twitter to inquire about the reasons behind the massive suspension of Cuban accounts, Plunkett simply responded that the company’s policies “apply to everyone.”

“If the account holder feels that his account was suspended by mistake, he can appeal here,” he concluded.

*Some of the personal accounts were reestablished on the evening of September 12.

Plane crash in Havana was due to “chain of errors”