Plane crash in Havana was due to “chain of errors”

The final report of the commission of inquiry, published by the Cuban Institute of Civil Aeronautics, indicates the "predominance" of the "human factor" in the accident. 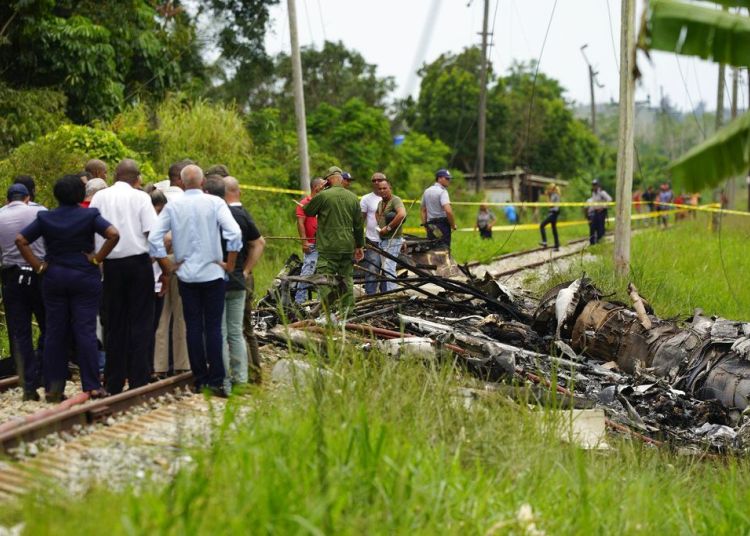 The tragic plane crash that occurred in Havana on May 18, 2018 and that left a toll of 112 dead was due to a “chain of errors,” according to the final report on the accident just published by the Cuban Institute of Civil Aviation, which points to the “predominance” of the “human factor.”

“The most probable cause of the accident was the collapse of the aircraft as a result of its entry into abnormal positions immediately after liftoff during the takeoff, which led to the loss of control of the plane due to a chain of errors, with a predominance of the human factor,” indicates the commission of inquiry into the incident in the conclusions of the more than 100-page report.

Investigators also attributed responsibility in what happened in three “contributing factors”: “inconsistencies in crew training,” “errors in weight and balance calculations” of the aircraft, and “low operational standards manifest in the flight.”

The report says that no “proven evidence of traces of defects or malfunction of the aircraft―a Boeing 737-200―that could have contributed to the accident” was found, but does point out “failures in good practices to perform maintenance.”

However, it says that “in the maintenance records of the aircraft there was no evidence of previous technical problems, related to the controls of the aircraft, which could have an incidence on the causes of this accident,” which largely exempts the controversial Mexican Damojh Airline of responsibility. 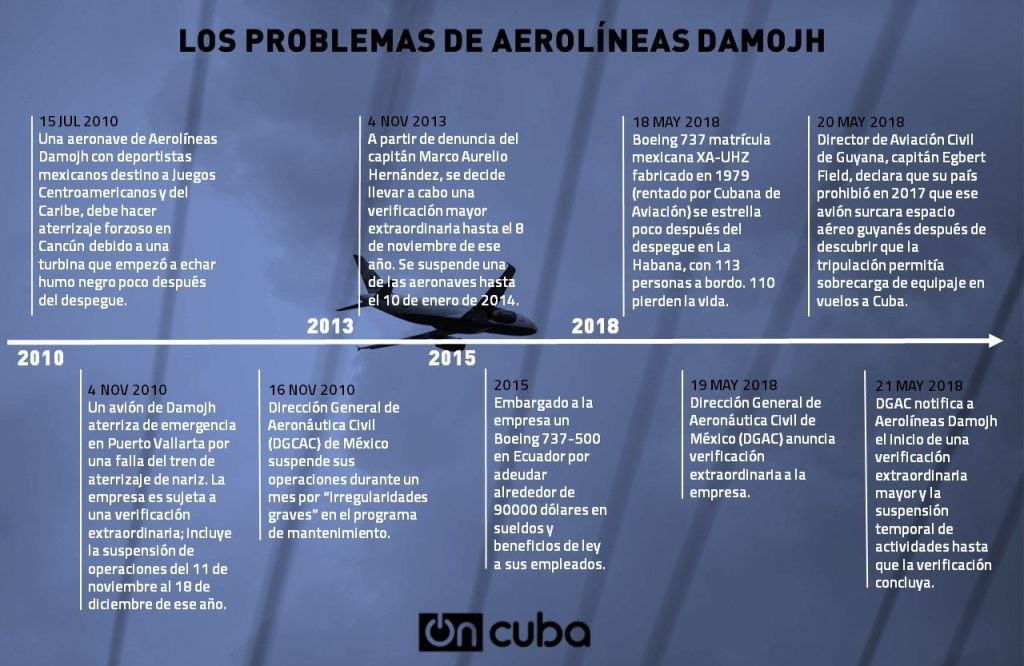 A Damojh Airlines plane with Mexican athletes on route to Central American and Caribbean Games has to make a forced landing due to a turbine that started spewing black smoke a short time after takeoff.

Based on a report by Captain Marco Aurelio Hernández, it is decided to carry out an extraordinary mayor verification until November 8 of that year. One of the aircraft is suspended until January 10, 2014.

Boeing 737 with Mexican register XA-UHZ manufactured in 1979 (chartered by Cubana de Aviación) crashes shortly after taking off in Havana, with 113 persons on board. 110 died.

Captain Egbert Field, director of civil aviation of Guyana, states that in 2017 his country forbid that plane from flying over Guyanese airspace after discovering that the crew allowed excess baggage on flights to Cuba.

A Damojh plane makes an emergency landing in Puerto Vallarta due to a failure in its landing gear. The company is subject to an extraordinary verification; it includes the suspension of operations from November 11 to December 18 of that year.

Mexico’s General Department of Civil Aviation (DGAC) suspends its operations for a month due to “serious irregularities” in the maintenance program.

A Boeing 737-500 is impounded from the company in Ecuador for owing around 90,000 dollars in salaries and legal benefits for its employees.

DGAC notifies Damojh Airlines of the start of an extraordinary mayor verification and the temporary suspension of activities until the verification concludes.

It also states that “the actual take-off weight of the aircraft was greater than that used in the calculations” and that “the center of gravity was 10% further back than calculated.” Both indicators, although “they were within the operational limits,” do constitute “a contributing factor.”

As for the crew, it ensures that it “was qualified for the flight in accordance with current regulations” and had “appropriate medical conditions and had rested enough for flight operations.” But “some deviations inherent to their training with respect to norms were detected.”

In addition, it includes the transcription of the conversations in the cabin of the plane and between it and the control tower before the accident took place, and also photographs and tables in its annexes.

The Boeing 737-200 chartered by the Cuban airline to the Mexican company Global Air for flight DMJ-972, which crashed on May 18, 2018 minutes after taking off from Havana bound for the city of Holguín with 113 people on board.

The report of the commission of inquiry includes detailed information on the background of the event, the status of the aerodrome, established communications and flight recorders, as well as on the damages suffered by the aircraft, assistance after the accident and the victims, among other aspects

Only one passenger survived, Mailen Díaz Almaguer, 19 at the time of the accident, in which 101 Cubans and 11 foreigners lost their lives: seven Mexicans―including the six crew members and one tourist―, two Argentines and two Saharawi residents on the island, one of whom also had Spanish nationality.

Last March 15 it was announced that the investigation had been completed and the report would start being written. The analysis of the two black boxes of the aircraft allowed for “exactly determining elements such as speed, height, turns, engine power and possible technical failures,” the authorities then said.

Later, in May, the Institute of Civil Aviation attributed to “human errors” the “most probable cause” of the accident, in a preliminary version of the report, which coincided with what was said earlier by the Mexican company, a conclusion that was dismissed as “premature” at that time by the commission of inquiry and the General Directorate of Civil Aviation of Mexico.