The Trump administration will no longer suspend Title III, a decision that will take effect next May 2. 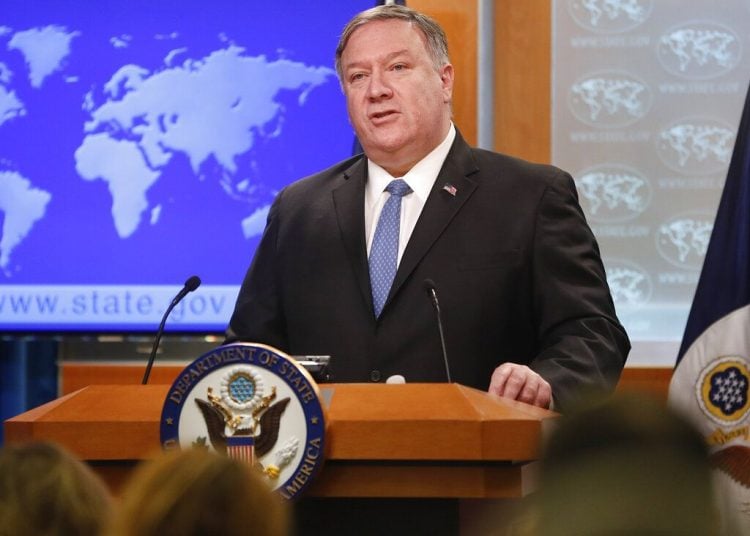 Secretary of State Mike Pompeo during a press briefing at the State Department in Washington, on Wednesday, April 17, 2019. Photo: Pablo Martinez Monsiváis / AP.

U.S. Secretary of State Mike Pompeo this Wednesday announced the activation for the first time ever of a measure that will allow the filing of lawsuits before U.S. courts for properties expropriated starting in 1959 with the Cuban Revolution.

“The (Donald) Trump administration will no longer suspend Title III (of the Helms-Burton Act), a decision that will take effect on May 2,” Pompeo said at a press briefing.

Effective May 2, under Title III of the LIBERTAD Act, U.S. citizens will be able to bring lawsuits against persons trafficking in property that was confiscated by the Cuban regime. After more than 22 years of delays, Americans will finally have a chance at justice.

This is the first time that a U.S. administration has activated Titles III and IV of the Helms-Burton Act, which have been suspended by all presidents since the approval of the regulation in 1996.

This policy change will open the door to U.S. lawsuits against companies from all over the world, including Spanish hotel chains such as Meliá, Barceló and Iberostar; as well as the Canadian company Sherritt, dedicated to the mining sector and one of the main foreign investors on the island.

Specifically, the application of Title III will allow Americans, including nationalized Cubans, to sue before U.S. courts the companies that supposedly benefit from properties in Cuba that were theirs or their family before the Cuban Revolution.

Meanwhile, the application of Title IV will restrict entry to the United States of those who have confiscated properties of Americans in Cuba or who have traded with said properties.

Pompeo argued that Cuba’s behavior undermines the security and stability of countries in Latin America and as an example he gave the support allegedly being provided by Cuban intelligence to Venezuelan President Nicolás Maduro, subject to a campaign of pressure by the United States.

Pompeo added that sadly, Cuba’s biggest export these days is not cigars, nor rum, it’s oppression.

The Cuban regime has for years exported its oppression to Venezuela. Cuban military, intelligence, and security services keep Maduro in power. This behavior undermines the stability of countries in the Western Hemisphere, and poses a direct threat to U.S. national security.

That decision promises to fuel tensions with the EU, whose high representative for Foreign Policy, Federica Mogherini, warned this month in a letter to Pompeo that the bloc could sue the U.S. before the World Trade Organization (WTO) if Washington implemented that measure.

The EU already sued the U.S. before the WTO two decades ago, when the Helms-Burton Act was passed, but it suspended that procedure once the White House agreed to freeze those titles of the text.

In this regard, U.S. Assistant Secretary of State for Latin America Kimberly Breier warned that no company, whether American or European, will be exempt from the new policy towards Cuba and, therefore, may be sued before U.S. courts if they are using nationalized properties.

“There will be no exceptions,” Breier said bluntly.

In a study published in 1996, the State Department estimated that the activation of Title III would allow between 75,000 and 200,000 lawsuits to be brought before U.S. courts.