Jeffrey DeLaurentis referred to the current government’s approach to the island as “a hollow imitation of a policy that failed the United States for nearly 60 years.” 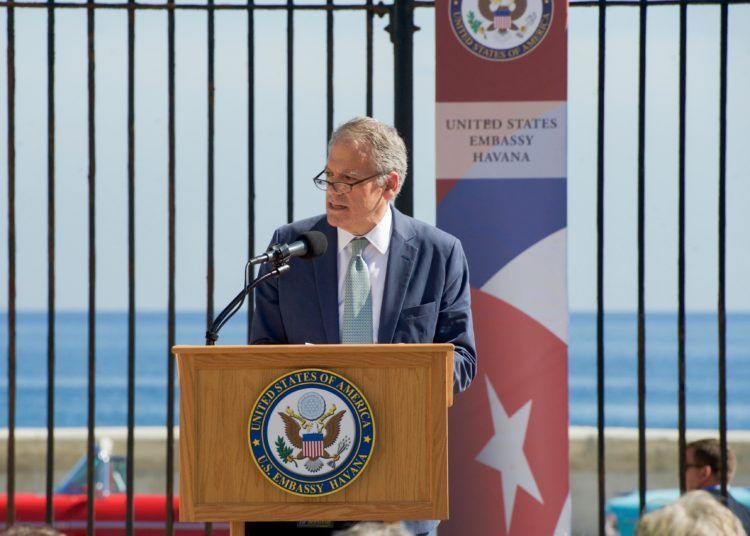 DeLaurentis during the opening of the United States Embassy in Cuba. Photo: Council on Hemispheric Affairs

Jeffrey DeLaurentis, the U.S. diplomat who supervised the Barack Obama administration (2009-2017) normalization process of relations with Cuba, pointed out that the current policy towards the island is “feckless” and based on “domestic politics.”

DeLaurentis regretted this Tuesday in an editorial published in the Miami Herald that the Donald Trump administration is deporting Cubans seeking asylum in the United States, limiting the ability of Cuban-Americans to send remittances to the island and restricting trade opportunities and travel.

“The administration’s hypocrisy is breathtaking,” wrote the diplomat, who led the U.S. legation in Cuba between 2014 and 2017.

He criticized that those who direct the “maximum pressure” policy towards Cuba know it will not lead to a regime change, that rather “it strengthens Cuba’s (and Iran’s) hand in Venezuela, with Russia and China occupying the vacuum we left behind.”

He regretted that “they nevertheless continue down this path, trying to manipulate an important political bloc understandably frustrated and impatient for change on the island they love.”

DeLaurentis was a key actor in the bilateral rapprochement process initiated in December 2014 by former President Obama and Cuban President Raúl Castro, which took a complete turn under the administration of Republican Trump.

The diplomat called the current government’s approach “a hollow imitation of a policy that failed the United States for nearly 60 years.”

“Meanwhile, hardliners in Cuba smile from ear to ear. They know how to deal with this playbook exceedingly well; it is far more comfortable for them than engagement,” he wrote.

With the reestablishment of bilateral relations and the opening of the U.S. Embassy in Cuba in July 2015, DeLaurentis became Charge d’Affaires.

Obama formally nominated him as ambassador to Cuba in September 2016, but the Republican opposition, which controlled both Houses of Congress, declined to put that appointment to a vote, and DeLaurentis was never confirmed.

DeLaurentis stressed in the editorial that Obama’s policy increased the flow of information to, from, and within Cuba, and that Cuba’s private sector, which now represents 15% of the GDP, was dynamic and growing.

“Living conditions for the Cuban people, especially those courageous enough to venture into burgeoning private enterprises, were improving. Mentalities were changing,” he said.

He further affirmed that anyone who thinks they will be compensated through a lawsuit under Title III of the Helms-Burton Act, which now allows these processes in U.S. courts for property confiscated on the island after the 1959 revolution, “is dreaming.”