Miguel Díaz-Canel’s speech closed the 2nd Plenum of the PCC, which was attended by Army General Raúl Castro. 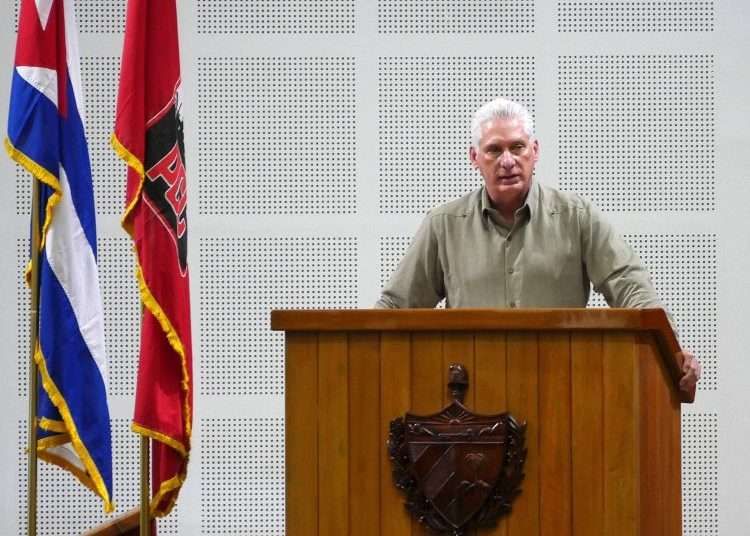 The president of Cuba and first secretary of the Communist Party (PCC), Miguel Díaz-Canel, urged members to “close ranks” in the face of the difficulties facing the Caribbean country. The speech closed the 2nd Plenum, which was attended by Army General Raúl Castro.

In his speech, Díaz-Canel urged “to close ranks, to fight for our problems, to fight creatively,” which, he said, “is part of the struggle,” according to state media reports from the meeting, held this weekend in the Havana Convention Center and to which the foreign press did not have access.

“There are enough revolutionaries here to face any type of demonstration that seeks to destroy the Revolution. Our struggle is with intelligence, with respect and in defense of our Constitution, also with energy and courage,” he said.

Along the same lines, Díaz-Canel warned that those who seek to destroy Cuba’s social project “are going to have to fight against a people who are not fooled, sufficiently numerous, brave and heroic, and who are not scared by threats.”

In this sense, he seems to have alluded to the organizers of the peaceful protest march, scheduled for November 15 and that the government has declared illegal. “The decision of the Cubans continues to be one of struggle and victory,” said the head of state according to the report.

The application of the guidelines of the last PCC congress was assessed during the two-day meeting, which was attended by just over a hundred members of the Central Committee of the PCC.

They also debated the political assurance system for the actors of the Cuban economy, with emphasis on the importance of strengthening the unity between the state and private enterprises, and on new forms of management such as micro, small and medium-sized enterprises (MSMEs).

The MSMEs authorized in Cuba for a month total 234, most of them in the private sector. Together with the non-agricultural cooperatives and the state enterprises, they are set to oxygenate the depressed Cuban economy, hit by the COVID-19 pandemic, the reinforced U.S. sanctions and the delay in its reforms.

The Plenum of the Cuban communists discussed details of the processes that will take place on the island between 2022 and 2023, such as the popular consultation and referendum on the new Family Code, and the elections of the delegates to the municipal assemblies and National Assembly of People’s Power (unicameral Parliament), which are renewed every five years.

In addition, they approved modifications to the Party Statutes, a program for the transformation of ideological work, a general strategy for the policy of its officials in the 2021-2026 period, among other issues.

The Central Committee of the PCC is the highest governing body of the Party between congresses and is currently made up of 114 members; meanwhile, the Political Bureau has 14 members; three of them women.