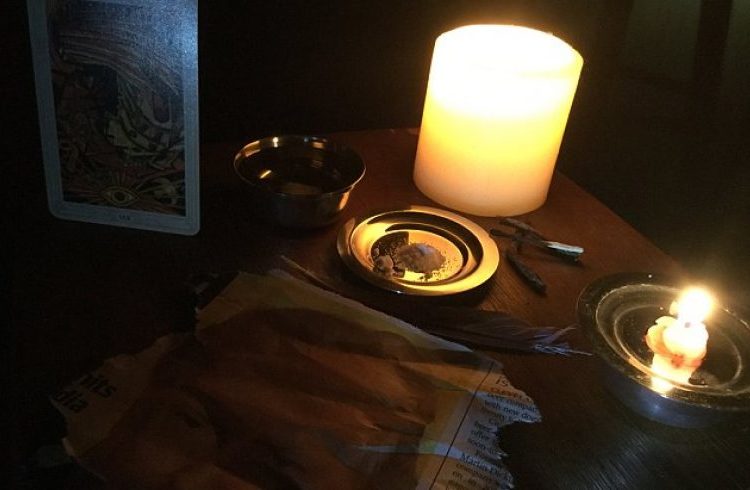 On the altar: The spell’s aim is to avoid President Trump from doing harm and to banish him from his post. Photo: Facebook / Mail Online.

Trump is operating in the context of a divided and polarized society. He took over the White House thanks to the mechanism of the electoral college, questioned by the popular opposition (and its surroundings) for being old-fashioned and, ultimately, antidemocratic. The president and his team came to power with a string of executive orders in their hand, the first to start dismantling Obamacare, and one of the last to block the entry into the United States of persons from seven Muslim majority countries with visas or permanent residence, all of this under the mantle of national security. It was the first blow, a measure that was stopped dead by the judicial power and which fuels, among other things, the allegations of unconstitutionality that from then until today is reverberating in U.S. society.

The result of these and other moves redounded in a violation of the social contract in a range of economic, social, cultural and political actors which are reacting from their respective spheres with statements or acts against the presidential power, beyond the media, the new Satans that however just simplify the voices and comply with one of their tasks as institutions /reflection of the political class, or of sectors within it.

The Trumpists are like a hip fracture or a shot, and the bang effect of his policies lies in this, a consequence of the “deconstruction of the administrative state,” of the dismantling of Obama’s legacy – they had been waiting impatiently for eight years – and of the clash with U.S. history, practices, values and traditions, like that of the country of immigrants, taken from the famous poem by Emma Lazarus embossed at the foot of the Statue of Liberty.

The cities are shaking with the protests and demonstrations while Trump’s bases, invigorated by the President himself, approve and cheer an individual who considers himself the spokesman for the people and the forgotten , but with approval indices in full free fall; the lowest in the modern history of the United States. According to a poll by NBC / The Wall Street Journal, close to half of Americans (48 percent) do not approve his work just a bit over 30 days after his presidential inauguration.

This administration, on the other hand, has gone by in the midst of manifestations of domestic crisis and even the violation of federal regulations which are not, in no way at all, fake news. And with atypical problems, to say the least. An intelligence community that is wary of and in contradiction with its President, who they do not trust.

Michael Flynn tendered his resignation due to the telephone affair with the Russian ambassador, a matter that, as is known, in which there conflicting insults: in less than 24 hours the national security adviser went from having the absolute trust of the President (according to adviser Kellyanne Conway) to not having it (according to White House spokesman Sean Spicer). And there were others who handed in their resignations before reaching the goal. First Robert Harward, Flynn’s replacement, because he didn’t want to participate in that administration’s chaos – according to leaks, the retired vice admiral characterized it as a shit sandwich.

Philip Biden, a businessman and intelligence officer of the military reserve who would be heading the Navy, has just left the game: he threw the towel alleging private reasons and conflict of interests (a word to the wise is enough, as the saying goes). Crisis in certain Federal Government agencies, one of them the Department of State, today with existential problems: exits, layoffs and the blocking of high-ranking officials – some of them in their posts under Republican and Democratic administration – for not sharing the presumptions of the President or simply for dissenting in public or in private. The culmination is a White House announcing that its employees’ telephones would be searched for leaks, an evident indicator of discrepancies in the inside. They’ve just done it and have come out ridiculed.

Because of all these circumstances, plus others omitted due to a spirit of synthesis, there are three key words being increasingly incorporated to daily conversations, and which particularly implicate the President: conflict of interests, impeachment and Amendment 25. The parallels with Richard Nixon have started to come up. One of the first – and certainly not the only one – in the words of journalist Carl Bernstein, who together with Bob Woodward contributed to opening Watergate’s Pandora box.

Perhaps we are at the threshold of a crisis of unforeseeable reach. The Trumpists are not going to stop, and it seems they are ready for anything that comes their way. The new chief strategist Steve Bannon has made a statement unusual in U.S. culture, even at the level of codes: “the ideological struggle is a day-to-day issue.” Meanwhile, the popular opposition, the Democratic Party and specifically its most radical sectors, will not be standing by twiddling their thumbs. Signs with the word “war” have appeared in demonstrations and squares, from New York to San Francisco. Nothing like it had been seen since the time of the Vietnam War.

But one of those actors calls attention because of their unprecedented character: the witches. In keeping with that defiant spirit, and with the atmosphere of tension with which people live every day, the summons for a transnational spell to stop Donald Trump, and finally to make him fall, is gaining ground in different spaces and the social media. A peculiar impeachment.

However, it is not one of the traditions, like those three famous women in Macbeth or like the Tituba of Salem, which gave rise to collective hysteria under the umbrella of puritanism, but rather wiccas, a re-vision and re-semanticalization of witches that started in the England of the 1950s by Gerald Gardener and developed by U.S. feminism in the late 1960s and early 1970s.

In a tight synthesis, neither slaves of Satan, nor old ladies with warts or poisoned apples, nor the wicked green face with black hat painted by Hollywood in The Wizard of Oz. They are women who stand out for their spirituality, social conscience and humanism:

Of Water, Earth, Fire and Air

And spirits of the ancestors

I summon thee to stop

So that he completely fails

So that he does no harm

To any human soul.

Etymologically, wicca means living in harmony with the natural world. It is a religion that returns to the origins; thus its ecological sense, alarmed by the executive orders that give the green light to the oil pipelines of Keystone and Dakota, as well as to cut, in favor of war expenditures, the budget of the Environmental Protection Agency (EPA).

It’s about an entity led by Scott Pruit, an individual with proven links to the oil and gas industry. A lethal choice, let it be said, equivalent to placing the Chapo Guzmán at the head of the Drug Enforcement Administration (DEA). The spell then makes an appeal to not let them do harm….

And to stop Trump so that he…

Or fill our minds with hate.

And to his inner circle of bureaucrats:

All those who let him do harm.

And to his fanatics:

And to all those whose mouths

I implore, spirits, to stop them all

I invoke you in my name

In the name of all those who walk,

Of all the trees, the forests

In the name of justice

Meanwhile, in a lake in Hanahan, North Carolina, an orange-color alligator has just appeared. The neighbors called it Trumpgator.