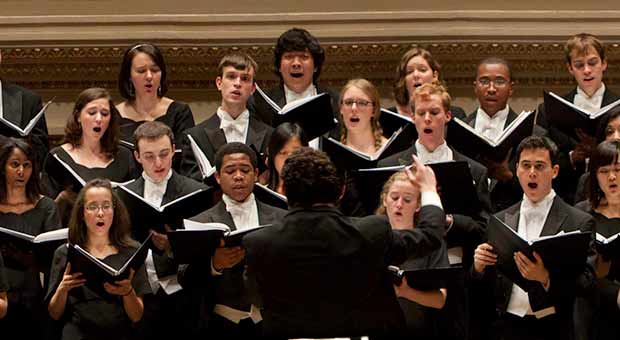 Yale Glee Club will be embarking on a concert tour to Cuba on March 10, 2014. The Yale Glee Club is the premier mixed choir of students from Yale University and one of the largest of its kind in the United States. The choir is directed by the phenomenal Dr. Jeffrey Douma, who toured Cuba with the Yale Alumni Chorus in 2010.

The choir will give two concerts during its stay in Cuba. The first will be at the Iglesia de San Pedro Apóstol in Matanzas city, 100 kilometers east of Havana, on Wednesday the 12th along the Coro de Cámara de Matanzas directed by José Antonio Méndez. The following day they will move to have for their second concert, this time at the Basílica Menor del Convento de San Francisco de Asís, along the Entrevoces choir, directed by Digna Guerra

On this trip and his previous visit to Havana, OnCuba interview Dr Jeffrey Douma, who gracioulsy accepted to tell us on his experiences and projects this time:

Mr Douma, this will be your second visit to Cuba as a conductor of a Yale choir: what were your impressions on Cuba and Cubans last time?

First of all, I was amazed by the choral singing. Cuba is a musical country, so I expected them to be excellent, but these were some of the best choirs I had heard anywhere in the world. The warmth and generosity of the people I met also made a big impression on me.

What, as a conductor, do you do different that made the New York Times hail your choir as “one of the best collegiate singing ensembles, and one of the most adventurous.”?

I think it has first to do with our wonderful students, who are so smart and so motivated to excel. They feed off one another’s energy. It probably also has something to do with our long history, the priority we place on new music, and being a part of the vibrant musical culture at Yale.

You worked in your first trip along Cuban Digna Guerra and the Solistas de la Habana orchestra: how would you describe that experience?

Again, I thought Digna’s choir was one of the best I have ever heard – expressive, accomplished, and so versatile. And I loved conducting the orchestra in a spirited performance of the Beethoven Choral Fantasy.

Before the concert you gave at the Lazaro Pena Theater you said and I quote “We leave Cuba now, but we take with us Cuban songs that we will perform in other countries” did you do it? If so, how was the audience reaction when they saw Cuban music in your repertoire?

Yes, we have since performed some of the repertoire that we learned – El Bodeguero for example. I think they were well received by both singers and audiences.

The second Yale International Choral Festival will be held in New Haven in June of 2015: are you planning to invite a Cuban choir? Do you think that opportunity will be helpful for the American people to learn more about Cuba?

Yes! We do hope that a Cuban choir will join us in New Haven in 2015. I think the audiences here would learn a lot.