Although the animal protection regulation has not ceased to be on the agenda, it would be a surprise if it received the green light before the end of the 8th Congress of the PCC. 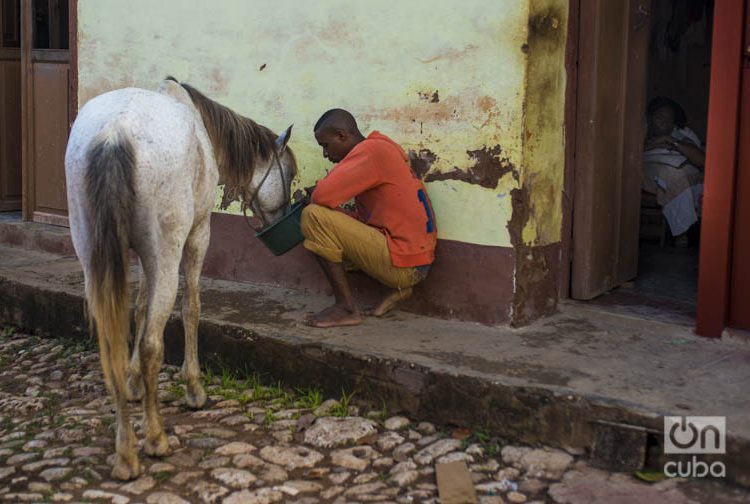 The fall was a matter of a second, but getting the horse back on its feet required the efforts of several men and the water offered by a local neighbor. This was the only way the animal was able compose itself a bit and continue on its way, with the carriage already without passengers and, according to its owner, “on its way home.”

However, one of the persons who was observing the scene from a nearby barber shop thought that it would be enough to wait a while to see this means of transportation and the suffering brute return, completing another trip on the route to the cancer hospital. There was a good chance that he was right.

If it weren’t for passenger carriages, Camagüey would be a collapsed city at “rush” hour. With barely a sixth of the buses it needs, the mobility alternatives in Cuba’s second largest city have animal traction as their “hobbyhorse.”

On average, around a tenth of the passengers who move within the urban perimeter do so on horse-drawn carriages.

“One would not want to depend on them, because of the prices and because of how the poor horses suffer, but what other option is there? Neither buses nor scooters are enough, and whoever has to move on the basis of pedicabs is left penniless,” lamented a nurse who uses the busy Borla-Maternidad route in Camagüey on weekdays.

Accustomed to being at the center of public criticism, the “coachmen” use as an excuse the expenses they have to face to justify the frequency of trips. “Taxes did not increase, and in fact many have not even obtained a license, but everything else is through the roof,” said a coachman from the stand located next to the Provincial Museum of the city. He considered himself lucky because he had his own horse and ccarriage, although he was also hoping to meet the challenge of raising at least 200 CUP (Cuban pesos) a day to acquire the grass and molasses with which he feeds his animal.

“But that money can be earned in a couple of trips,” I pointed out. “And everything else?” was his reply. “Carriage maintenance is constant, and every so often you have to go to the vet or attend to a thousand other things that arise, not to mention that you have a family and needs to cover. It is true that some people work with rented carriages and horses, and that those suffer more because the owner does not care the same about the animal, but the truth of the matter is that it is hard work, under the sun and night dew. Of course the horse is going to suffer, if the first to suffer is the coachman!”

On February 26, the Council of State of Cuba approved the Decree-Law on Animal Welfare that, as announced, would enter into force 90 days after its publication on the Gaceta Oficial de la República. Although all the institutional statements avoided defining dates, it was understood that the deadlines until the application of the regulation would be as short as possible.

In short, it has not been so. After a January and February unusually “loaded” with events related to the subject—in a few days, a Decree on violations in the practice of veterinary medicine, the consequent demands from these professionals and the authorization to provide private services circumscribed to the care of affectionate animals, also the self-organized protest before the Ministry of Agriculture (MINAG)….—, March seemed destined to end without major new events.

However, this Tuesday, March 30, MINAG announced the creation of a temporary working group for the implementation of the Decree-Law on Animal Welfare. The newspaper Granma reported that the new entity will prepare the conditions for the entry into force of the Decree-Law, but did not give details.

With Havana taken over by the COVID-19 pandemic, the authorities’ priority is focused on promoting advanced trials of its vaccine candidates.

The animal regulation has not ceased to be on the agenda, but it would be a surprise if it received the green light before the end of the 8th Congress of the Communist Party of Cuba (April 16 to 19), especially since it must be complemented by a regulation of which nothing is known yet, and a program of actions that would require resources and training for the bureaucratic structures in charge of enforcing them. Even if the temporary goal for the activation of the norm were the last quarter of 2021, institutions such as the police and inspectors should be preparing as of now. But there is no news that something like this is happening.

Nor has it been defined how the alleged national network of veterinary pharmacies could be sustained, and the renovation of the battered state clinics. A recent note by the official Cubadebate website detailed the situation of scarcity that all these centers in Havana face in practice; “we work with what clients help us or donate. The country does not have the conditions to maintain a stable service,” acknowledged Frank Villate, veterinarian at the Casino Deportivo clinic, an establishment that had not received medicines and other supplies for months.

Between protection and necessity

In 2005, a study by the Agrarian University of Havana (UNAH) highlighted the advisability of animal traction being combined with motorized traction in most agricultural tasks. To the environmental benefits of this practice, the authors added others of an economic nature, such as saving foreign exchange and protecting the topsoil. As endorsement of their thesis, they appealed to the example of tobacco farming, the only branch of the sector with sustained growth in Cuba, in which “animal traction has always been predominant. The tobacco producer knows how to protect their soils.”

Another report, published by UNAH’s own Revista de Ingeniería Agrícola in 2019, translates into numbers the importance of animal power for the Cuban rural economy. At the end of 2018, oxen, horses and mules contributed a quarter of the power available for agricultural work on the island; “there are more than 330,000 implements for teams of oxen…MINAG has planned to encourage the use of animal traction in all those tasks where it is convenient from a technical and economic point of view,” the text states. Such a policy is particularly significant for regions such as the eastern region, where animals must compensate for the insufficient availability of machinery (the 10 western and central provinces use almost equally 75% of the tractors and harvesters included in the MINAG registries).

The Ministry of Agriculture does not, however, have a public protection policy for the more than 600,000 animals used in its field of activity.

In theory, the National Center for Livestock Control (CENCOP) could dedicate part of its efforts to this task, but, among the responsibilities established by the Law, none is explicitly focused on guaranteeing animal welfare. CENCOP is one of the agencies that coachmen must go to to regularize their legal status, as part of a process that also involves the National Tax Administration Office (ONAT), and the ministries of Science, Technology and Environment, Interior, and Labor and Social Security. Among so many powers, it has never been very clear who would be responsible for ensuring animal rights.

Even after the entry into force of the regulation on animal welfare, issues such as cockfighting, which several groups of activists request to ban as animal cruelty but legal since 2001, will surely remain pending.

“In this, as in almost everything, the question ends up being money. Between a horse carriage and an automobile, everyone is clear about what they would prefer; but wishes are one thing and the possibility is another,” reflected the Camagüey coachman quoted at the beginning of this text.

A couple of carriages ahead of his, another coachman took advantage of the time at the stand to check the sports page of Granma. In the same issue he was reading, a note on agriculture called for greater efforts in the use of animal traction and import substitution. It described them as “top priority.”