Photographer Gabriel Guerra Bianchini is one of the first Cuban artists to publish and sell a work converted to NFT. 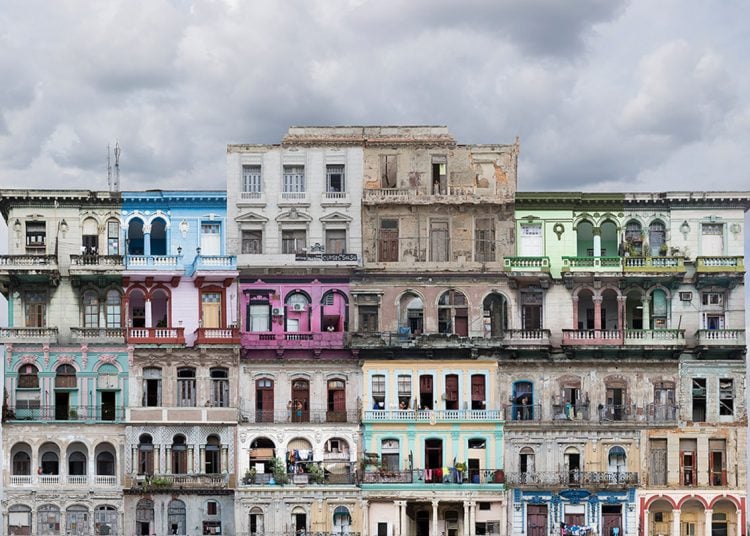 Photographer Gabriel Guerra Bianchini is one of the first Cuban artists to experiment with NFTs (Non Fungible Tokens) in the crypto world.

Despite the fact that he now lives in Havana, after spending several years in Europe, he was able to enlist the help of people from outside the country to publish his first piece on OpenSea.io, a platform to market this new form of digital art. He could not do it from the island due to the limitations of the United States embargo, but a complete stranger paid his fees (commonly called GAS in crypto language) to publish his piece Hotel Havana and put it up for sale.

An NFT, or non-fungible token, is still difficult to explain, but it is basically a cryptographic token that generates something virtually unique (in this case a piece of art) by which its authenticity can be proven.

“When I decided to launch my first NFT I was clear about what piece it would be. It was going to be Hotel Habana, a job that took me a year to do, it was very hard. I published the piece as NFT being faithful to how I had already physically marketed it, to the point that the buyer is not only buying the token, the digital file, (if you know the NFT you will know how it works), but I am also giving them the printed piece so that it makes sense to me, because I think it is important that the person who buys it can hang his work as I have done with other collectors,” Bianchini said in an interview with the Cuban Gallery platform and that we share today with the readers of OnCuba.

How did you make this work of art?

It is a work that consists of something very simple. In my head, I saw a surreal building, created as a kind of collage. So what I did for several months was to photograph terraces and balconies of Havana with that rushed and so surreal architecture that exists here, and not assemble it as a collage, one photo next to the other in Photoshop, but I simply got into something more difficult, which is to start welding it based on the miniature, from the zoom, the tube that goes through here that gives continuity on this side and thus weld all those photos to create a surreal building, a building that has an impressive resolution; as each balcony is a photo, you can imagine, I think there are 52 RAW files to create this piece. This piece is printed in a giant format because the resolution allows it and it is impressive to discover every detail of each balcony of this architectural madness that exists in Cuba. It is a picturesque way of saying: this is really our architecture, this is what the tourists will receive when they come, not only the beautiful part, this is also our reality.

That work, again, has a very strong sentimental value, so for me it had an emotional cost to finish it. It is a work of ten editions. It had an impressive acceptance on the internet, in the networks it spread very fast, two editions were also sold and then taking it to NFT for me gives it added value. The people who buy it will not only receive the file in high resolution of 200x200cm, which is an immense file that they can then take to whatever they want and they create with that work of mine something else that they want to create, and not only that, they will receive the work to hang it in their home. I think what makes it special is precisely that: the Cuban flavor, the fact that Cuban art is getting to this world, in which there are probably many collectors, there may even be many collectors who adore Cuban art and are looking for it today in the NFTs and finding little, because there is still little. So for me that’s the value of getting to the NFT market so quickly. 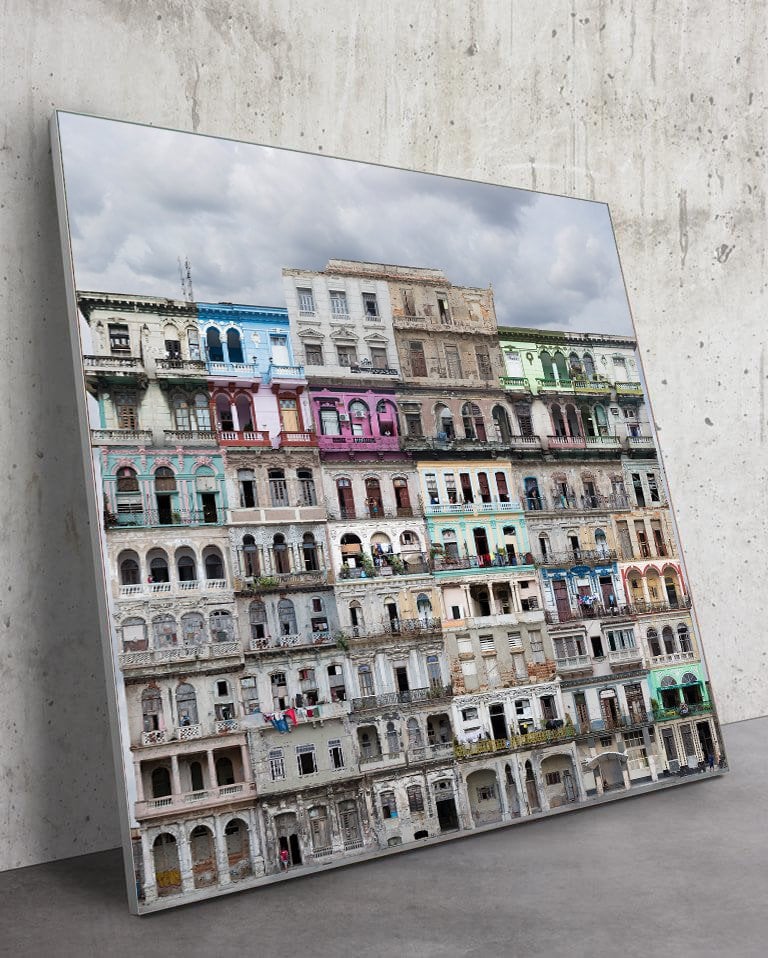 How did you manage to publish and sell your first work as an NFT?

Presenting the first NFT from Cuba was a “titanic” task, a job that I wouldn’t know how to explain it, because well, you understand how the market works but now you have to add to that the limitations of a Cuban artist living in Cuba: the internet, the internet prices and the main thing, the Embargo. The Embargo that is real when you need to access a page where the NFTs are marketed and you cannot because you need a VPN. You download the VPN and some of the pages don’t even open with VPN. Even so I managed to find what it was, with the VPN, and then comes the second most complicated stage. To publish an NFT you first have to pay a tax, sometimes not so small. This tax is paid in Ethereum, in cryptocurrency; I had never had cryptocurrency in my life nor did I know what it was, except for bitcoin and what I had heard.

So I studied that topic too, I looked for a way to buy it and I couldn’t find it. Life, people and human energy are incredible; in one of these conversations about NFT I commented on my experience of what I had managed to do so far, so that they would tell me if I was doing it right and the problems that I had encountered, that I could not buy the Ethereum to pay for the GAS, which is the tax, and there’s when a charitable person appeared, incredible, a 23-year-old young man from New York. He simply called me on Instagram and told me: “Turn on your computer, I’m going to pay your GAS, your Ethereum.”

The piece went up for auction for a week. It’s funny how he told me something very nice, because I insisted on finding a way to return the money when I would get paid, and he told me absolutely no, he told me something very simple: “Continue the chain of favors. Do this favor for someone else.” I have to say this so softly so you can understand how exciting it is that there are people like this in the world and what it represented for me, and it was then when I published the NFT, that I announced it on my Facebook, the first thing I said was that as soon as I collect the money for that work I was going to take some of those Ethereum to pay the GAS for other Cuban artists so that they can also present their work and not have to go through what I went through, and to facilitate their path as it was facilitated for me and continue that chain of favors.

How do you think crypto art can help Cuban artists?

I immediately understood that this is very important for Cubans. We are talking about marketing the works online, in a totally democratized way, without depending on any gallery or curator, in theory. Logically you have to have good taste, good art, as in everything, but I realized that it is a place with tremendous power. And logically I got to study it as much as I could, first to be able to publish my first work as NFT and then to share that information, because all those questions I asked myself are being asked by 20,000 young people in this country right now and why not, if one dabbles in it, as they say in Cuba, to spread the word, to pass on to others what you extract from all that information so they can start using that application and that way of marketing the work as I am doing myself right now.

For Cuba the NFT is going to be what it is for the whole world. It is going to be something very important for the artists. Again, we live in a country that is an island, in addition blockaded, with tons of difficulties, we are in a pandemic, let us not forget that and, all these limitations have limited many artists who were already selling their works but who cannot travel, there are no galleries, no exhibitions; and others who have not even had that opportunity to have galleries or exhibitions. Well, this democratizes all that: you simply create an account, upload the work you consider and put it up for sale. As simple as that.

Based on this, it is a spectacular channel for Cuban artists who can monetize their creations, but especially for Cuban digital artists, the digital world is vast, even music. So it is a fabulous tool. Of course, there’s always good art, bad art. I later have seen chats by some curators who do not agree so much. Obviously, it is something new that is coming and staying. When it is here, there will come the regulations, the ways in which all that will function. But the reality is that it is fabulous.

How can your life as a creator change by selling crypto art?

The second most interesting thing, which is somewhat surreal, impossible to think about the real world of art as it has been moving until now, is that when you market your work, you have the option of asking to include it in the marketing contract, through the NFT, that there be 10% or 5%, whatever you decide, that it always comes back to you, in each sale that is made of that work.

To put it in a more practical way: I sell my work today for such a price, a collector buys it, that collector decides to put it on sale tomorrow for whatever reasons and receives a much higher offer. Well, I’m going to get back 10% of that offer that that collector received. It is surreal when you think about it, in which gallery that could have been done; it can’t. Those are the great advantages it has, imagination is the limit. What can be sold in a digital world? Everything. Everything can be digitized.

* This interview has been a collaboration between Cuban Gallery and OnCuba News.