Bicycling in Havana against climate change

"For a future without polluting emissions," reads the poster convening the event.

The bicycle is still opening its way in Cuba. Pedaling against climate change, an event organized by the delegation of the European Union and that gathered about 400 people who toured the oldest part of the capital, took place this Sunday, May 26 in Old Havana. The starting point and closing point was the Plaza de Armas.

“This bicycling event, public and aimed especially for young people and children, aims to raise awareness on the fight against climate change. It is part of the Green Diplomacy Week promoted by the European Union around the world, and World Environment Day, which is celebrated around the world every June 5. It is also part of the activities for the celebration of the 500th anniversary of Havana,” according to a statement from the organizers.

“It is the largest activity of this type that has happened here, with great participation by children and families who came to enjoy themselves in an affable environment,” Daniel Castellanos, specialist in urban mobility of the Territorial Planning and Management Group of the Office of the City Historian, said to IPS.

“And we achieved this participation thanks to…previous actions of the bicycling groups and because the concern for the environment and climate change is generating more and more debate and reflection,” added the main creator of Ha’Bici, the first project of public bicycles in Cuba, which has been functioning since November 24, 2018. 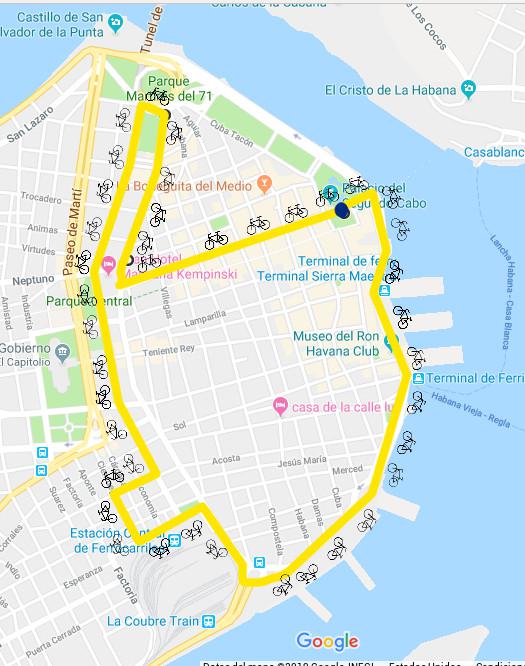 The bicycle as a means of transportation significantly reduces the undesirable effects of motorized traffic: namely, noise, pollution, road insecurity…. Cuba, moreover, has a deficient automotive park which, since it’s very old in many cases, is not environment friendly, and can also represent a danger to life. On the island, traffic accidents are the fifth cause of death; and the first in children and young people from 15 to 29 years of age.

Pedaling against climate change was organized by the delegation of the European Union in Cuba and the Office of the City Historian, with the collaboration of the Embassy of the Kingdom of the Netherlands, the Provincial Department of Transportation and the capital’s local authorities; as well as the Bicicletear La Habana group, Ha’Bici, Rutabikes and Ferlan’s, who provided some 70 bicycles.

Events of this kind have gained a certain frequency and interest on the island. In the Cuban capital, a critical mass has been carried out for about three years, an activity celebrated by many cities around the world to promote the use of bicycles as a healthy, safe and sustainable alternative. Last June 3 coincided with the first World Bicycle Day, decreed by the UN, which “is in favor of” this type of initiatives.

On the first Sunday of every month Bicicletear La Habana convenes all those who want to tour the city, free of charge, with their own or rented bicycle. Bicycle rental businesses and other ventures related to this means of transportation have also proliferated.

Many affirm that taking into account the economic relapse that was announced and that can already be seen in Cuba, it is time to diversify the mobility options for citizens and improve the conditions for their safety on public roads. In addition, “bicycles are now much more attractive than a few years ago,” says Yasser González, who with other friends began the critical mass in Cuba and has seen how the participation and interest in these routes has increased.

“Yesterday it was shown that you can do a lot with and for the bicycle,” he said, referring to this Sunday’s event.

Why move by bicycle?

According to the UN, because it is “a sustainable, simple, affordable, reliable, clean and ecological means of transportation that contributes to environmental management and benefits health.” In addition, “the relationship between the bicycle and its user encourages creativity and social participation; also, it allows the cyclist to know firsthand the local environment.”

The bicycle gives “a positive message to encourage sustainable consumption and production. In addition, it has a beneficial effect on the climate,” says a document issued by the UN.

Another purpose of this campaign is to invite States to improve road safety and integrate it into the planning and design of sustainable mobility and transportation infrastructures, in particular through policies and measures aimed at guaranteeing pedestrian safety and mobility on bicycles.

"Well let's use technology on the cow"