Bruno Rodriguez will remain in Beijing until Thursday to discuss bilateral issues, after a three-day official visit to Russia. 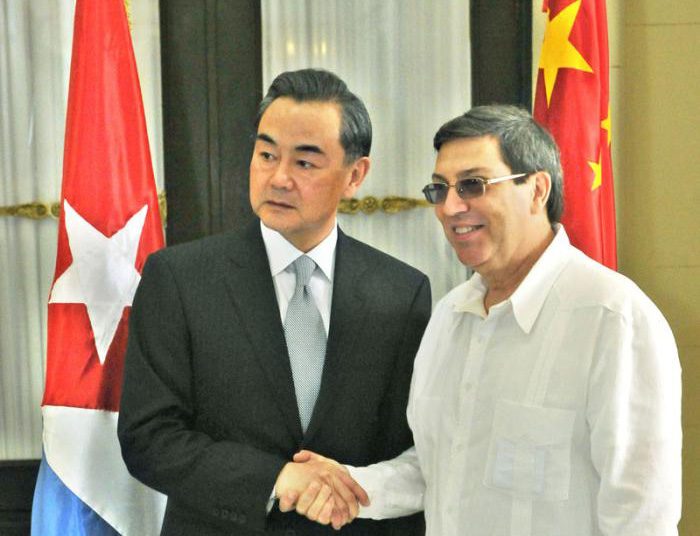 The foreign ministers of Cuba, Bruno Rodríguez (r), and of China, Wang Yi, during one of the latter’s visits to Havana. Photo: Granma / Archive.

Cuban Foreign Minister Bruno Rodriguez began this Tuesday a visit to Beijing to discuss bilateral issues with his Chinese counterpart, Wang Yi, at a time when both countries are strengthening their diplomatic and economic relations.

Rodriguez’ visit to China, at the invitation of Wang, will continue until Thursday 30 and during the meeting both foreign ministers will analyze “the progress of bilateral relations and matters of common interest,” according to the Cubadebate website, which quoted a spokesman from the Chinese Foreign Ministry.

The head of Cuba’s diplomacy completed a three-day official visit to Moscow, where he met with his Russian counterpart, Sergei Lavrov.

Both ministers denounced the “unilateral coercive measures” of the United States against the two countries, especially the embargo against the island, and Washington’s policy toward Venezuela. In addition, they confirmed the “strategic alliance” between Russia and Cuba.

It is expected that Rodríguez will also seek in Beijing a message of support against the U.S. embargo and to approach positions with his Chinese counterpart in relation to Venezuela, since both countries support Nicolás Maduro as president as opposed to the parliamentary leader Juan Guaidó, who has been recognized by more from 50 countries.

Cuba and China maintain close political and economic relations, in which the Asian country stands out as one of the island’s main allies and its second trade partner.

Last November Cuban President Miguel Díaz-Canel made a visit ―accompanied by Foreign Minister Rodríguez― to the Asian country, where he met with his Chinese counterpart, Xi Jinping, and both agreed to give a boost to the ties “of friendship” that unite both nations governed by a single communist party system.

In 1960, Cuba was the first Latin American country to establish diplomatic relations with the People’s Republic of China, created in 1949.

China, for its part, has traditionally supported Cuba in international forums such as the United Nations, in which it has called for the lifting of the U.S. embargo.

In that sense, the government of the Asian nation condemned the new measures strengthened by the Donald Trump administration against Cuba, among them the activation on May 2 of Title III of the Helms-Burton Act that allows filing lawsuits against companies from third countries linked to assets nationalized after the Cuban Revolution.