The march not authorized by the government on May 11 was not only due to suspension by the State/Party of the traditional conga included in the programs of the Cuban Days against Homophobia. 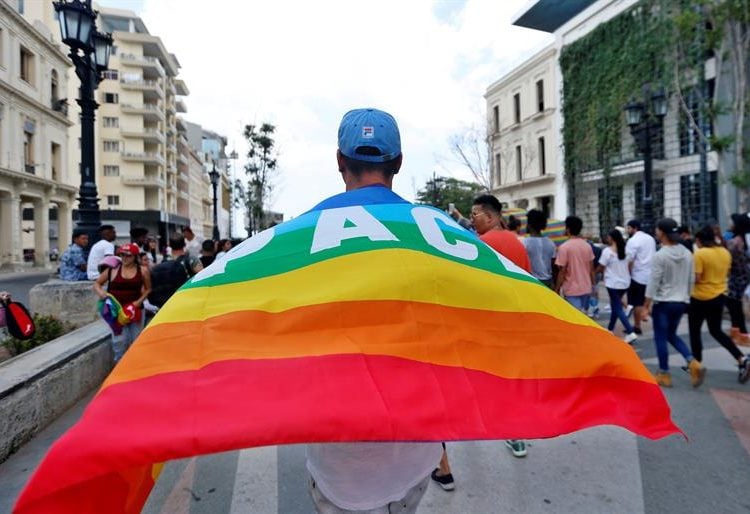 Activists for LGBTI rights participating in a march this Saturday May 11, 2019 along Paseo del Prado in Havana (Cuba). LGTBI activists and Cuban State Security Agents clashed this Saturday during an illegal demonstration called after the annual gay pride march organized by the official National Center for Sex Education (CENESEX), led by Mariela Castro, was canceled. EFE/Ernesto Mastrascusa

I took some time to reflect on the regrettable events that took place during the 12th edition of the Day against Homophobia. I stop at this moment with the conviction that it’s an unfinished debate.

I founded the Cuban Days against Homophobia when the idea that all activism in relation to sexual rights is political had already matured in me; therefore, it will always be crisscrossed by specific political values ​​and ideologies. Whoever doesn’t situate himself from this angle is naive or intends to manipulate the complex reality.

No ideological struggle is free of contradictions and the complex process of building political consensus (if that is possible among Cubans) always has advances and setbacks.

The march not authorized by the government on May 11 was not only due to suspension by the State/Party of the traditional conga included in the programs of the Cuban Days against Homophobia.

The antecedents and the circumstances I perceive are:

State/Party’s obsessive and pernicious fear of horizontal leadership and the emergence of LGBT groups within civil society collide with citizens’ gradual awareness about sexual rights as human rights. The training of activists by CENESEX and the Cuban Days against Homophobia have generated a critical mass of activists that overflows the institutional spaces and challenges the doctrines of control of thought and action that are generated from there. There are also many good people who are activists without having been linked to any institution.

Since a group of activists introduced the Yogyakarta Principles in 2007, their use has been extended to advocate non-discriminatory policies based on sexual orientation and gender identity, in accordance with international human rights law. The heterogeneity of these groups includes many ideological positions that fluctuate between radical Marxists, bourgeois social democrats, anarchists and neoliberals and neo-annexationists.

The usual mercenaries who are at the service of any ideology also appear. For the monochrome vision of the State/Party and its institutions these people are nothing but counterrevolutionary and any initiative that comes from them is criminalized, in the name of national unity. It’s not taken into account that except for the neoliberals, the annexationists and the mercenaries, there are many progressive people who would advance, from organized civil society, the public anti-discriminatory policies.

Arbitrary arrests, violent repression, censorship and discredit are neither revolutionary nor adhere to Martí’s principles of a Republic, as has been endorsed in the recent Constitution.

From the first editions tensions arose in conceiving this space as a celebration or political and revolutionary commemoration. The result has been the celebration and the dangerous approach to banality and precisely what we wanted to avoid: turning it into a Cuban gay pride march with strong class and neoliberal inspiration. While recognizing that pride in our identity is a political attitude, the conga itself has distorted that meaning and the parade of its leaders in pink convertible cars, the floats, the carnivalesque atmosphere and the strange participation of transnational emporiums like Google (in the 11th edition) are just some of the most notorious elements of this point.

The suspension of last May 11’s conga and the change of the fiesta to the same time that the unauthorized march would take place, was a very counterrevolutionary and irresponsible maneuver. The high participation in the march and the monitoring on the social networks by the participants in the fiesta of what happened on Padro speaks for itself of the fragmentation and violence that could have been avoided.

The parade of more than a hundred people, in a peaceful way and chanting slogans in favor of sexual rights and recognizing rights for all citizens, without counterrevolutionary expressions along the Paseo del Prado, are a far cry from unsubstantiated statements (such as those that accompanied the suspension of the conga) that the march was organized from Miami. What happened at the end, with the gross police repression and the detention of four people, was a provocation distant from the sense of the march. The presence of the media was taken advantage of and the regrettable events that now circulate in the news were unleashed.

On the other hand, the rich public exchanges with LGBT people in Havana have not taken place for more than six years. The written speeches, the introduction of other just causes but without the conviction of the assistants, have weighed down citizens’ participation. It would seem that music, half-naked bodies, transformism and dancing in the conga are the fundamental objective. The essentially political has been enclosed to academic spaces where we all discuss the same thing.

This point is also complex. Undoubtedly, CENESEX, the leadership of its director Mariela Castro and the voice of numerous activists have contributed to placing the rights of LGBT people in the political agendas and human rights discourses in Cuba. However, in the international context pendular positions have been shown. In 2010 our State/Party had to rectify its vote in the United Nations when it aligned with third world countries that condemn homosexuality with the death penalty and did not consider it as a cause of extrajudicial executions. Since then, our representatives have been absent in several votes on LGBT rights, especially in ECOSOC.

Since 2011, the need to eliminate all forms of discrimination based on sexual orientation and gender identity has been recognized in documents issued by the State/Party that include the Statutes of the Communist Party of Cuba and the Labor Code. However, from 2012 to 2013 serious tensions were generated by the public speeches of numerous activists associated with CENESEX on pending policies, including same-sex marriage. On this matter, the director of CENESEX has shown varying opinions according to the circumstances. Her speech was finally outlined in favor of same-sex marriage during the debate on the draft of the constitution. We later learned in the same period that the Catholic Church had been the mediator in the restoration of diplomatic relations between the governments of Cuba and the United States. At this point I paraphrase Martí: in politics the most important thing is what is not seen.

More recently, the elimination of Article 68 that opened the possibility in the draft of the constitution to recognize same-sex marriage was a conspiratorial wink of the State/Party to the fundamentalist religious groups, which have gained force in Cuba and enjoyed all the freedom to manifest themselves against the aforementioned article. Meanwhile, they maintained an iron grip on activists associated with the institution and no street actions were allowed against religious and fundamentalist hate speeches. The first three months have passed since the proclamation of the Constitution and no debate or concrete actions have been perceived to comply with the complementary laws that define the approval of the Family Code within two years. The approval of this legislation will be taken to referendum, thanks to the decisions of our representatives, experts in dictating policies through decree laws in their peremptory agendas.

I note that the Christian churches have been too quiet during these days, although we know on good faith that many of their proselytizers were in the vicinity of the fiesta organized by CENESEX doing their fundamentalist ideological work.

It depends. It’s not the first unauthorized march. It was preceded by some actions in the late 1990s, the marriage between a transgender person and a gay man and other unpopular attempts that were marked by interests to subvert order. Most of these activists without conviction are in the United States thanks to the gratifications of their political masters. Let’s not lose sight of the fact that we have many more here who will do everything possible to torpedo all attempts of civil organization that dialogue with the State/Party.

We also have former activists who now live abroad, who are patriotic and want to continue participating in the construction of a sovereign nation and have every right to do so.

Some have said that what happened on Saturday compares to May 1068 in Paris. Others have evoked the Stonewall Rebellion,* whose legacy has been taken as a global referent but distorted by the creation of a universally classist, elitist LGBTI movement that reproduces the market and patriarchal domination essences of heteronormative oppression. In fact, in many countries attempts have been made to found movements and anti-system praxis that move away from the ideological right and the political and commercial trivialization of the international LGBTI movement.

What happens from now on will depend on the concertation of actions and the teachings that emanate from these experiences. The permanence in force of a limiting Law of Associations and subsumed in the rhetoric of a besieged plaza plus the fragile mechanisms of citizen participation are a backward step for these actions.

Some see the march as a matter of winners and losers and focus their activism on the opposition to CENESEX and Mariela Castro. With such a narrow vision one can’t advance much either. Having a government institution that deals with these issues is necessary, but that doesn’t limit the recognition of the right of LGBT people to self-organize as part of civil society, with the ability to participate and to question policies.

The May 11 march also reflects that Cuba is not Paris of 1968 or New York of 1969. A great deal of political participation and the exercise of civil rights are done on the social networks. The call went viral and despite the final outcome, people came to express their positions in relation to this issue. To say that all were deceived or confused is contempt for the intelligence of people and at the same time we must be very careful about who (or those who) benefits with results alien to our struggles.

On the other hand, to those who believe they are masters of the Revolution and of thought, I inform them that a change of era has taken place in Cuban society. Comply with the Constitution and give back the Revolution.

*The Stonewall Inn bar was the epicenter of a rebellion of gay men and transgender people against police harassment in New York City in 1969. In June it will be 50 years.

**This text, originally published on the blog [email protected], is reproduced with the authorization of its author.