Approximately 4,500 people, the vast majority from Cuba, are waiting in Ciudad Juárez to be interviewed for asylum applications. 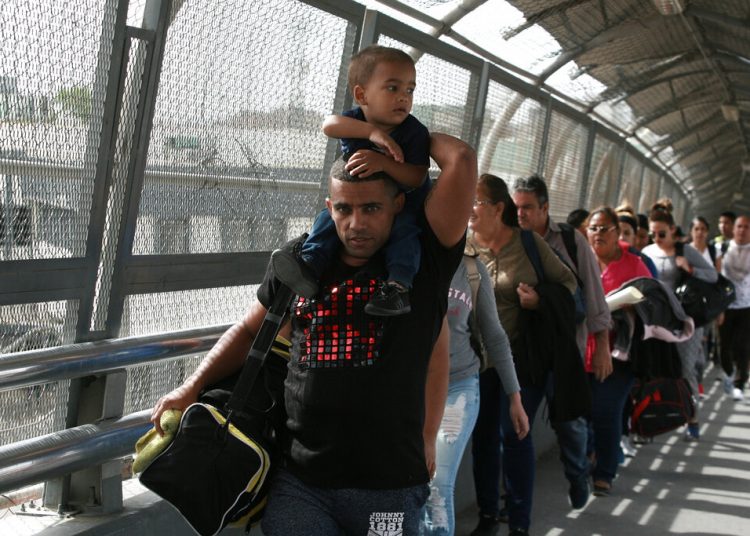 In this photograph from April 29, 2019, Cuban migrants are escorted by Mexican immigration authorities in Ciudad Juárez, Mexico. (AP Photo/Christian Torres)

A growing number of Cubans are trying to reach the United States through the border with Mexico, joining the hundreds of people who have been waiting for months on the Mexican side to apply for asylum.

The increase recorded in recent months has been driven in part by a greater flexibility to travel through Central America and the deterioration of living conditions in Cuba.

Approximately 4,500 people, the vast majority coming from Cuba, are waiting in Ciudad Juárez, on the border with El Paso, Texas, to be interviewed for their asylum application, at times causing tensions with local residents.

“The bottleneck is closing,” said Enrique Valenzuela, a government official in the northern state of Chihuahua, who is in charge of the waiting list in Ciudad Juárez. “A lot of people keep coming.”

For decades, during and after the Cold War, Cubans have tried to reach the United States by air, sea and land, many of them venturing on the dangerous 145-kilometer (90-mile) journey to Florida aboard fragile boats and rafts

However, the United States put an end in January 2017 to its “dry foot, wet foot” policy that practically admitted automatically any Cuban who stepped on U.S. territory. For many Cubans, their best option now is to go to the border between Mexico and the United States and apply for asylum.

For many years, Cubans entering through the southern border generally flew to South America and tried to reach the United States through Laredo, Texas. But now many use a relatively new and shorter route: they fly to Panama or Nicaragua, they pay traffickers to help them reach the border with the United States and try to cross through El Paso.

In the seven-month period from October to April, 4,737 Cubans without legal status entered the United States at the Customs and Border Protection Office crossings in El Paso, compared to 394 in the previous 12 months. Along the entire border between Mexico and the United States, 10,910 Cubans arrived at official crossings between October and April, an increase from the 7,079 in the previous 12 months.

The communist government of the island refuses to cooperate in its entirety with the United States on deportations, which means that if they lose their asylum cases, Cuba generally doesn’t accept them back.

The United States has no other options than to allow them to remain in the country.

For Cubans and other migrants, one of the biggest obstacles is simply having the opportunity to apply for asylum. During the last year, the government of President Donald Trump has limited the number of applications to be processed at land crossings, forcing people to wait for their turn on the Mexican side.

With the current processing rate, the waiting time in Ciudad Juárez is about five months, compared to just a few days in February.

In recent years, Panama has earned a reputation as a relatively simple source of visas for Cubans who could present convincing arguments that they only wanted to go shopping and return to sell their products in Cuba. Panama has a free zone where Cubans can purchase anything, from shampoo to air conditioners and electric motorcycles.

In October, Panama started charging 20 dollars to issue visas to Cuban entrepreneurs and others who meet certain requirements, replacing a longer and more complicated process that often culminated in a rejection.

In January, Nicaragua facilitated and accelerated the processes for Cubans to obtain a visa in Havana by eliminating the requirement that applications be approved in the Nicaraguan capital.

Meanwhile, a decrease in Venezuelan aid and a stricter U.S. stance on the trade embargo against Cuba have caused food shortages and a sense of crisis on the island. Young people, in particular, line up outside any embassy that is willing to grant them a visa.

The friends of Yaneisi Hernández, from Havana, told her that Ciudad Juárez was safer than other crossings to Texas, that it had a strong network of assistance groups and, most importantly, the wait for asylum applications was relatively short. After traveling by air to Nicaragua and paying a trafficker to get to the U.S. border by bus, taxi or on horseback, she was disappointed to realize that there were 3,500 names before hers.

“I can’t even think about working here because they can deport me,” complained Hernández, 39, after spending her first night in Ciudad Juárez with other Cubans in a grassy area outside the government office where asylum seekers are assigned numbers while they wait.

Cubans who arrived in Ciudad Juárez last month said they paid about 2,000 dollars to traffickers to get close to the border with the United States, as well as between 150 and 400 dollars in the Mexican city of Tapachula, bordering Guatemala, to hire a lawyer who would get them a court order that would allow them to move legally through Mexico. They waited around three weeks in Tapachula to obtain legal permission to remain in Mexico.

Many Cubans are detained by Mexican authorities during their journey north. Last month more than 700 Cubans fled from a migrant detention center in two separate escapes in a crowded Tapachula facility.

The increase of Cubans has been such that the restaurants of Ciudad Juárez have added to their menu Cuban dishes such as roast pork and rice and beans.

Unlike Central Americans, many of whom flee from extreme poverty and arrive with little more than the clothes they wear, many Cubans can afford ―with the help of their relatives in the United States― a cheap hotel or rent a room in case the migrant shelters do not have available space.

They buy cell phones during their short stay in Mexico, and use them to check a group on Facebook that provides updates twice a day on the status of the waiting list. Cuban men are easily recognizable by their impeccable sports shoes and dark aviator sunglasses.

However, some residents of Ciudad Juárez are cautious.

The Casa del Migrante, which is home to up to 1,000 people, banned the entry of Cubans earlier this year because they don’t get along with Central Americans and do not follow the rules, said administrator Blanca Rivera.

“They don’t like the food,” Rivera said. “They demand rice, cold cuts with sliced ​​bread, they want pizza…. That attitude in the hostels can be frowned upon.”

Some Cubans are not happy in Ciudad Juárez either.

Around 10 Cubans seeking asylum met near a station to charge their cell phones at the El Paso airport, waiting for a flight at 6:00 in the morning for Miami. After flying to Panama and arriving in Ciudad Juárez in early February, Arnoldo García, an electrician from Havana, said he waited only two days to seek asylum in El Paso.

After spending two months in a detention center in the United States, García, 47, was released and a date was set to appear before the immigration authorities in Miami. He said that he wouldn’t recommend going to Ciudad Juárez to anyone planning on making the journey.

“It would be more advisable to not come through Juárez,” he said. “It’s much more complicated.”