The meeting, which will be virtual between specialists from Havana, Geneva and Washington, will serve to share initial information, coordinate documentation and establish schedules, according to The Associated Press. 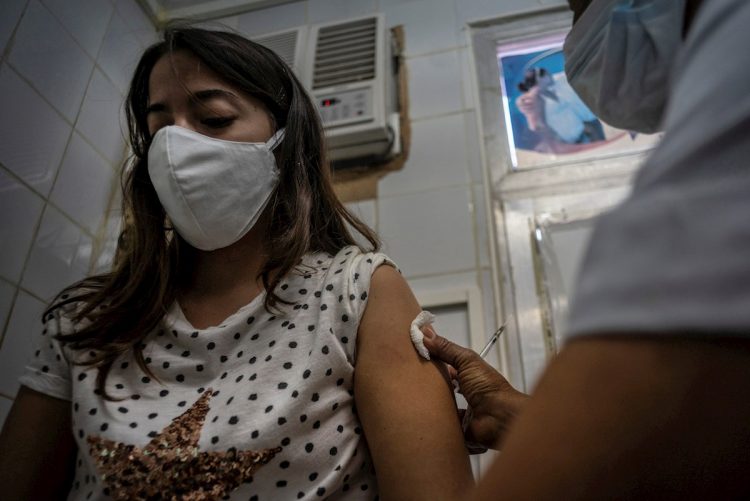 A nurse applies the Cuban Soberana 02 vaccine to a health worker, as part of a study in a polyclinic in Havana (Cuba). Photo: Ramón Espinosa/EFE/Archive.

The three Cuban-produced vaccines against the new coronavirus will be presented to the World Health Organization (WHO) for qualification in a process that will begin with a meeting of experts next week, as reported by the U.S. The Associated Press agency.

“Today I had a meeting with the president of BioCubafarma, the Finlay Vaccine Institute and the CIGB (Center for Genetic Engineering and Biotechnology) and the process will begin at the request of the country,” the representative on the island of the World Health Organization and the Pan American Health Organization (WHO/PAHO), José Moya, told AP.

The meeting, which will be virtual between specialists from Havana, Geneva and Washington, will serve to share initial information, coordinate documentation and establish schedules. “This is good news,” he said, indicating that a work team will be established later to review the results of the Cuban vaccine trials, production processes and quality.

“When we receive the authorization for the emergency use of 3 #COVID19 vaccines by the Cuban regulatory authority…we plan to begin exchanging information with the WHO for their recognition,” Eduardo Martínez, president of BioCubafarma, the state conglomerate that produces drugs in the country, wrote this Thursday.

The enterprise denied press comments in the United States that affirmed that the international entity had denied approval to Soberana 02, Soberana Plus and Abdala, the three inoculants developed by Cuba, since the process for this is about to begin. Meanwhile, one of the directors of CIGB, Marta Ayala, indicated on her Twitter account that there was a long list of “positive exchange experiences with the WHO for the certification of vaccines,” such as those against hepatitis and some types of influenza.

Each country has the power to approve the vaccines it is going to use, but those approved by the WHO offer an even more reliable endorsement and allow them to be distributed through the immunization mechanisms of that organization. In the case of antigens against COVID-19, only those approved by WHO can be distributed by the COVAX mechanism, created by the United Nations to facilitate access to immunization, or by the PAHO Vaccine Revolving Fund.

That opens up for them an even bigger market for vaccines around the world. Without the authorization of the WHO in order to access the international market, it must be done through bilateral agreements. Representative Moya, who arrived on the island more than two years ago, indicated that since the beginning of the pandemic he had followed the work with the then vaccine candidates. “I have confidence (in the Cuban antigens) because I have been able to know the evolution from the beginning” and “they are elaborated by institutions that have been making vaccines for years” with which the WHO/PAHO itself cooperated in the past.

Cuba registered a slight decrease in cases this week after a rebound in recent months with about 10,000 infections a day and the health system collapsed in some regions due to the lack of infrastructure, oxygen and medicines. The outbreak was due to a relaxation of the rules of social distancing at the beginning of the year and the arrival of the Delta variant.

The authorities initially said that 70% of its population would be vaccinated by August, a goal that was not met, and which they hope to meet between September and the end of the year. The use of Sinopharm vaccines — donated by China — also began in a combination scheme with Soberana Plus.

With information from Andrea Rodríguez and AP.