An exhibition in the virtual environment shows the work of 20 Cuban women artists immersed in the new panorama that NFTs represent in Cuba. 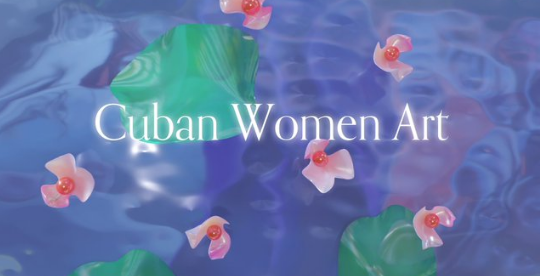 Dynamically, the NFTs (non-fungible tokens) have been gaining space in the Cuban visual panorama, despite the difficulty in access to the Internet on the island, in terms of prices and connection speed, two fundamental elements for those starting in this new world of the digital environment.

The creation of several platforms (Clit Splash, NFT.Fac, NFTcuban.Art) in recent months, has allowed hundreds of artists to insert their works as NFT on various platforms and thus promote the commercialization of their works, alternatives that are more than effective given the shortage of physical exhibition spaces in Cuba, due to restrictions because of COVID-19.

Cuban Women Art is the exhibition taking place these days in that context of digital art, where 20 women show their works with a variety of formats that we can rarely find in traditional spaces for the exhibition of artworks.

The visual and exhibition wealth that NFTs provide is evidenced in the exhibition, where some of the visual artists intervene in a personal capacity, while others do so through different projects such as those mentioned above.

Photographs, drawings, illustrations, collages, videos…the means are diverse and converge in the same space, where the feminine travels through various aspects to acquire meanings that complement each other and show a fairly comprehensive outlook of the protagonists’ artistic work.

The intimacy of the female body in the works The Hori-Hori Knife Will Bury Your Tears and From Ada’s Rib… (Simone García Bacallao), Living it (Yolanda Santa Cruz), Farewell (Nadia Díaz Graveran), Three muses (Irenilla), Political Stance and 69 Lao Tzu, the last two by Kina Matahari, are pieces that explore various sensual/sexual aspects of the female anatomy, and in turn dialogue with the body positive, the acceptance of the bodies, the sexual act and the expressions and meanings that these elements come to represent for women, away from macho or conservative gazes.

The portrait also stands out in this exhibition, with an exquisite selection in the visual environment, with works such as Mariana (Evelyn Sosa), Renpet (Claudia Padrón), Nuances and Sea Woman (Denise Roque), and the hyper-realistic pieces by Diana Rubi.

Also standing out are the works by Dayani Muñoz, two digital collages that, under the discourse of female empowerment and an aesthetic that plays with kitsch, resizes messages in the fragments that make up their montages, where the cluster of intertexts — many times with recognized patterns — is conditioned to frame a strong discourse in the pieces History told by icons (Collage 1) and A day in heaven.

On the other hand, a more intimate discourse can be seen in the pieces by Alejandra Glez. and Ailen Maleta. On the one hand, Maleta uses works such as Delirios and Sin Fin from her series En la carpintería, which show reflections (rather shadows) of what her education was in the years she lived in the workshop where her father worked, an influencing aspect in her personality and her work as the artist describes this stage as “moments of pain and loneliness,” which allowed her to find herself living in a delirium.

Meanwhile, Glez. presents her concerns through Self Portrait and Swallow Men, reflecting to a certain extent conducts and behaviors, expressing anxiety attacks and impulses in the face of certain actions, going a little beyond a personal vision to show concerns and, why not, promoted desires through interaction with men, as with Swallow Men.

The visual, artistic and emancipatory universe of Cuban Women Art in the Cuban art scene remains to be discovered, in an exhibition where not only young artists win with the dissemination and sale of their works, almost without intermediaries, but it is also an alternative for the future insertion of more artists in the vast world encompassed by the NFTs.

During the exhibition, in addition, theoretical panels have been organized that seek to dialogue with Cuban artists and specialists, in order to further enhance this market, in the face of new challenges and opportunities in the visual arts sector. With a Havana Biennial on the way, full of doubts and with the aim, according to its organizers, of enhancing the visibility of national artists, Cuban Women Art is one more opportunity for Cuban digital art to reach more people in the country, avoiding the difficult obstacle of being a digital native on a quasi-disconnected island.