After the closure of schools last March due to the spread of the coronavirus epidemic in the country, the Cuban Ministry of Education “implemented strategies to maintain teaching, such as telelessons, which guaranteed the development of the teaching-educational process,” said Deputy Minister of Education Dania López. 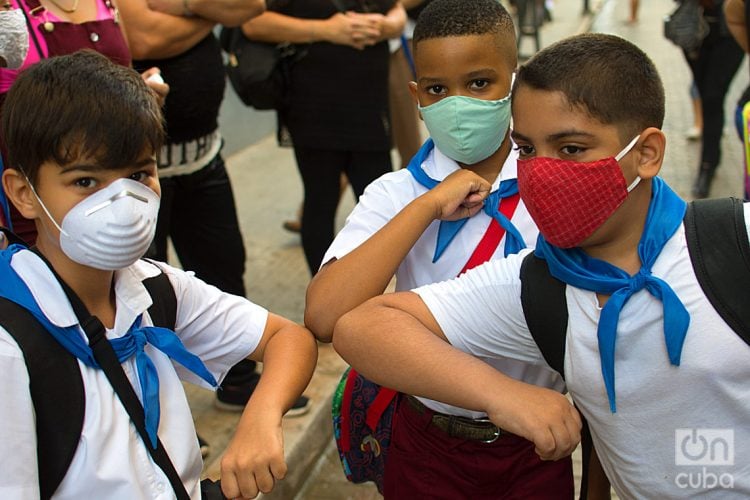 Three children greet each other before entering their school in Havana. Photo: Otmaro Rodríguez.

The 2019-2020 school year in Cuba ended without reports of transmission of COVID-19, said the island’s Deputy Minister of Education, Dania López, this Wednesday.

After the closure of schools last March due to the spread of the coronavirus epidemic in the country, the Cuban Ministry of Education “implemented strategies to maintain teaching, such as telelessons, which guaranteed the development of the teaching-educational process,” the deputy minister said.

“We needed to change and transform the school, towards the family, from the home. We also reinforced the use of audiovisual media with the capacities created by our country: an Educational Channel with national coverage, a production house that guaranteed all the necessary content to support teachers and the family, as well as a telematic network that manages an educational portal,” said López, quoted by the official newspaper Granma.

The deputy minister affirmed that in the 2020-2021 academic year the island is experiencing the same epidemiological situation caused by the pandemic, so “every day we are called to strictly comply with the hygienic-sanitary measures and the permanent use of the mask.”

She acknowledged the “titanic work” of the teaching staff who presented educational programs on television at a time when schools had to close to protect students from the contagious disease.

Likewise, she said that many teachers not only collaborated in the continuity of the educational work, but also “lent their support in hospitals, in isolation centers, in food production and in caring for the family.”

According to the source, the deputy minister reported that Cuba is working on a proposal for the transformation of educational institutions and modalities, which are the new forms of work of the Third Improvement, and will be generalized in the recently started 2020-2021 school year.

On March 24, the school year was interrupted due to the epidemiological situation unleashed by COVID-19, but day-care centers continued to function to provide service to the children of mothers who had to stay in their jobs, following government policies.

In September, the 2019-2020 school year was resumed in almost the entire island, although applying the face-to-face and television variants, due to the re-outbreak of the disease suffered by several Cuban provinces. This school term ended at the end of October, except in Havana, which reopened its classrooms on November 2 and just ended the last school year and started the new one.