According to a resolution of the Ministry of Justice, the decision was made based on the fact that in recent years “the request and issuance of certificates has increased,” and “inconvenience, unnecessary procedures and excessive delays for the population in the solution, still cumbersome, of error correction processes.” 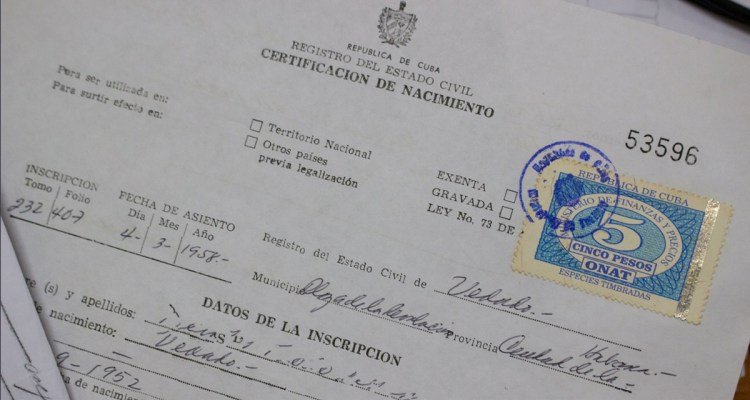 Birth, marriage and death certificates will no longer have an expiry date in Cuba, according to a Ministry of Justice resolution published this Thursday in the Gaceta Oficial de la República de Cuba.

Resolution 115 of 2020 repeals previous provisions that established a legal limit for these documents, and bases the decision on the fact that in recent years “the request and issuance of certifications has increased,” and the “inconvenience, unnecessary procedures and excessive delays for the population in the solution, still cumbersome, of error correction processes.”

Only the document certifying a person is single remained valid for 180 days.

In addition, the new regulation informs about the elimination of data that until now appeared in the certificates. Among these changes are that the death certificate will not record the place of birth or the marital status of the deceased, while the surnames of the parents of the parties will not appear in the marriage certificate, the Cubadebate digital site says.

*Caption: New Resolution of the Minister of Justice establishes that birth, marriage and death certificates do not…

Posted by Ministry of Justice of the Republic of Cuba on Friday, February 28, 2020

Other necessary data in these cases and previously already included in the certificates, are maintained. Among these are the certificate title, tome, folio and registry where the registration entry is recorded, and the registration office that issues it, with the municipality and province to which it belongs, as well as the date of issuance of the document, the names and surnames of the person who makes it and the person who confronts it, and the data related to the tax on it.

The delays in the procedures and the excessive steps in carrying it out are systematic complaints of the Cuban population, which must face these bureaucratic processes for their own or family procedures. The island’s authorities on several occasions have called for the simplification of these processes, but in many cases it remains a pending issue and a source of administrative corruption.