The communication team of Havana’s Pedro Kourí Institute of Tropical Medicine assured the Juventud Técnica magazine that publications that had gone viral on the social networks about three Cubans who had returned from Italy infected, are false. 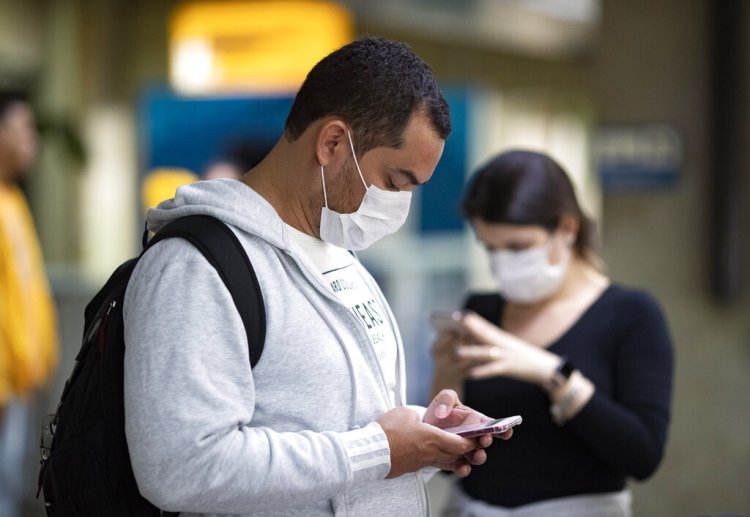 Passengers wearing masks as a precaution against the spread of the new coronavirus use their phones at the International Airport in Sao Paulo, Brazil, on Thursday, February 27, 2020. Photo: Andre Penner / AP.

The Cuban press denied this Friday rumors about the existence of three Covid-19 coronavirus cases in Cuba, which have circulated in social networks and in media outside the island.

The rumors, which have become viral, state that three Cubans who returned from Italy with symptoms of respiratory disease had been admitted to the Pedro Kourí Institute of Tropical Medicine (IPK) in Havana.

However, Juventud Técnica reported having contacted the communication team of the medical institution, which assured the magazine that this information is false and that the center was already aware of the comments.

For his part, Cuban Minister of Health José Ángel Portal published this Friday afternoon that Cuba still hadn’t reported cases of coronavirus and maintained a “strict epidemiological surveillance and border health control to minimize the risk of the virus’ entry.”

This is not the first time such rumors have circulated. Previously, there had also been comments on possible patients with Covid-19 admitted to the IPK and one in the city of Santa Clara, the latter apparently the result of a mistake after the report of a case in the county of Santa Clara, in California, United States.

Meanwhile, the island’s medical authorities have repeatedly insisted that there is no confirmed case in Cuba, although they have recognized the detection of people suspected of suffering from the so-called Wuhan pneumonia.

Francisco Durán, national director of Epidemiology of the Cuban Ministry of Public Health (MINSAP), said days ago in the state television newscast that “some people from China were fundamentally detected,” and they “have been isolated in the IPK” or in “the occasional hospital” on the island, because “they have presented symptoms which characterize this disease.”

The Cuban authorities have said that in the face of the advance of the new disease, which until this Friday had infected more than 83,000 people worldwide and caused the death of some 2,800, a plan has been implemented for its prevention and control approved by the Council of Ministers, and surveillance measures have been taken to prevent its entry and spread on the island.

In addition, they reported that Cuba already has the specific diagnosis kit for this coronavirus, a test that, according to Durán, “will be applied to those with symptoms that characterize the virus” and with epidemiological elements, such as having visited countries where the disease is already present.

Likewise, it was reported that a Cuban application on Covid-19 is available on the ApkLis digital site, to download free to mobile devices with Android operating system, which provides updated information on the virus and the disease it causes, as well as the Cuban Ministry of Public Health’s strategies, indications and regulatory documents on the subject.