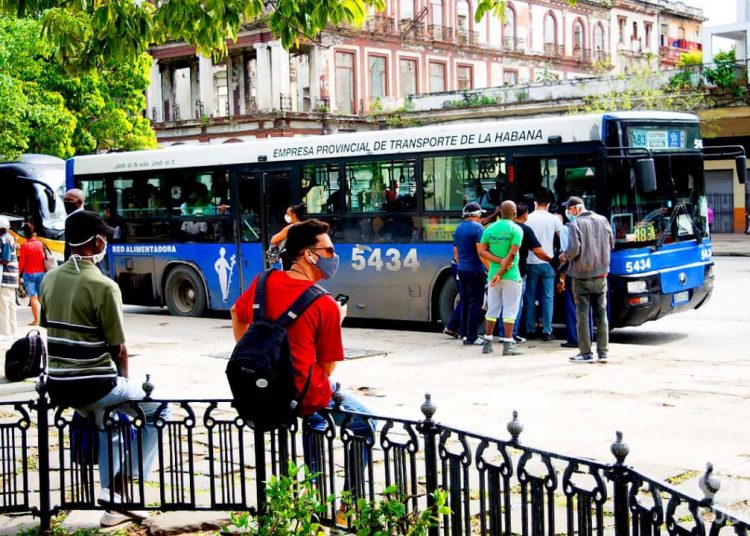 People at a bus stop in the Parque de la Fraternidad, in Havana. Photo: Otmaro Rodríguez.

Cuba closes again a week with an increase in infections by the SARS-CoV-2 virus, data determined by the increasing number of imported cases: 231 of the 456 positive cases identified during this week.

“There is an increase in diagnosed cases and imported cases, and this tenses the system, because the concern that exists is that the situation may continue,” said Dr. Pablo Feal Cañizares, director of the Center for the Promotion of Health and Disease Prevention of the Ministry of Public Health (MINSAP).

Most of the cases positive for the new coronavirus this week were travelers who arrived from the United States (260), Mexico (36) and Russia (35).

In this regard, the MINSAP authorities insist that everyone who arrives must abide by the measures and protocols established to prevent the spread of infections, within which “we are working so that the PCR results are ready in the first 24 hours,” Feal Cañizares said.

Regarding the patients diagnosed in the last 24 hours, the island’s health authorities reported 79 new cases, of which 27 were imported from Russia and Mexico.

Of the total, 72 correspond to Cubans and seven to foreigners: 47 were contacts of confirmed cases and in five individuals the source of infection is not specified. 72% of the group was asymptomatic.

Almost all the provinces, in one way or another, have an impact on today’s report, although, according to Feal Cañizares, the territories of Pinar del Río (22 cases), Havana (13) and Villa Clara stand out due to autochthonous infections (six).

Pinar del Río is also the province with the highest local transmission, with an incidence rate of 26.89 per 100,000 inhabitants, followed by Santiago de Cuba (7.46) and Cienfuegos (7.12).

This week there was also an increase in people in intensive care. In fact, today one patient was reported in critical condition and five in serious condition.

The 17 laboratories the island has to detect the new coronavirus processed 10,524 tests this time, a day in which 88 patients were discharged.