There are a total of 72 establishments that, according to what was announced, opened their doors for the sale of food and toiletries (57 stores), as well as hardware products (15), with prices in USD and payment through debit cards associated with bank accounts in freely convertible currency. 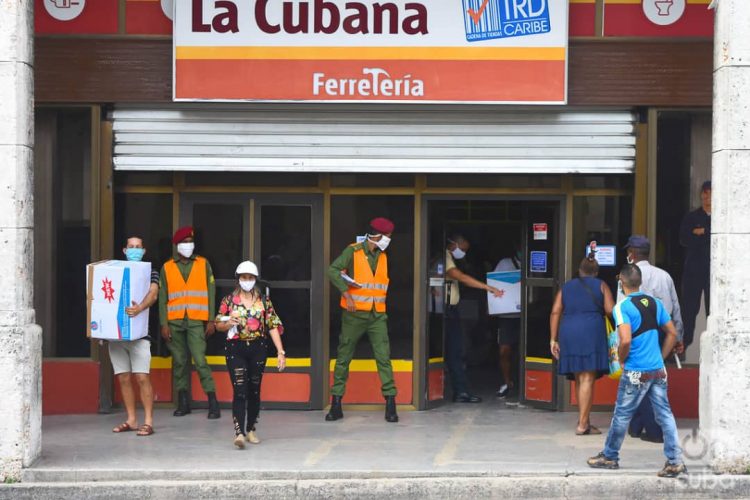 Buyers and police outside La Cubana store, on Reina Street in Havana, one of the new stores that started selling items in freely convertible currency this Monday, July 20, 2020, as part of the Cuban government’s new economic measures. Photo: Otmaro Rodríguez.

The new stores selling in freely convertible currency, whose opening was announced last week by the Cuban government as part of a package of economic measures to face the post-COVID-19 stage, started operating this Monday throughout the island.

There are a total of 72 establishments that, according to what was announced, opened their doors for the sale of food and toiletries (57 stores), as well as hardware products (15), with prices in USD and payment through debit cards associated with bank accounts in freely convertible currency.

Of these, 14 are located in different Havana municipalities and the remaining 58 are distributed throughout the country―at least two per province―, belonging to the state chains Cimex and Tiendas Caribe. They are joining the existing establishments for the sale of household appliances, electric motorcycles and car components in freely convertible currency, opened last October with the intention of injecting foreign currency into the battered Cuban economy.

On a tour of several of the stores in the Cuban capital, particularly those located in the municipalities of Centro Habana and Old Havana, OnCuba was able to verify a variable influx of buyers, corresponding to the products on sale. While those who sold toiletries―such as Doble Nueve, on the San Rafael Boulevard, and El Sol Naciente, on Obispo Street―had around 20 people this morning, in those selling food products―Prado 20 and La Arcada―the number was higher, and at La Cubana hardware store, on Reina Street, it was around a hundred.

As has become customary during the pandemic, the lines were located several meters from the stores, starting from the closest corner―in the case of La Cubana, popularly known as Feito y Cabezón, it spanned two blocks―and were organized by police officers. In several stores it was necessary to show the debit card to enter, although in others it was not.

The entry was made in a limited way, generally in groups of five buyers, to avoid high concentrations of people inside the stores, in accordance with the security measures established for the prevention and control of the coronavirus. This, however, contributed to slowing down the pace of sales in some establishments, thanks to organizational mistakes that, for example, caused that two hours after the sale began in La Cubana, only about 20 people had entered the store, as several would-be buyers confirmed to OnCuba.

As a common denominator, in none of the visited stores there was a list of products and prices published―as was the case with the stores opened last October, when they were even previously published in the official press―although in some of them the organizers provided verbal information to customers. Even so, some watched through the windows before deciding to stand on the line or insisted on the issue with the police officers or line organizers, which also slowed down the process.

Consulted buyers and store workers made it possible for us to know that among the products for sale in the different establishments, there were food products such as beef, sausages, cheeses, cereals, canned products, vegetable oil, various drinks, and also toiletries. such as shampoo, hair conditioner, creams, soaps, shaving products, of “high quality” brands and with prices “close to the equivalents in CUC (Cuban convertible pesos).”

In the case of the hardware store, the star product of this first day of sales were the tiles―at 8.00, 10.00 and 15.00 USD per meter, according to a client who did not want to reveal her name―, although sanitary furniture could also be purchased, fittings, electric heaters, sinks, among other items.

In other areas of Havana, such as the municipalities of Playa and Plaza―in the 3ra and 70, La Puntilla, Línea and 12 stores―, as well as in other provinces with a more limited number of establishments, press reports and publications on social networks report a large influx of buyers on this first day of sales in the new stores in freely convertible currency.

The opening of these new stores takes place in a complex economic context for Cuba, which was already dragging serious difficulties due to the increase in the U.S. embargo, the crisis of its ally Venezuela and domestic deficiencies, now joined by the impact of the pandemic in the national and global economy.

This forced the Cuban government to launch a new economic package that implies “transformations” in “strategies that don’t work” and which also includes the elimination of the 10% tax on the USD, as well as measures to promote food production, the future start-up of SMEs, both in the private and state sectors, the expansion of incentives for foreign direct investment and the opening of the claimed wholesale markets, although also in freely convertible currency.

Cubans can now receive money orders of up to 1,000 dollars from Peru and Colombia

Cuba today with four cases of coronavirus, all in Havana

Cuba today with four cases of coronavirus, all in Havana