Luis Manuel Otero Alcántara went on a hunger and thirst strike last weekend, after denouncing that police forces had raided his home and had extracted and damaged works of art of his authorship. The official press calls into question the strike and considers it part of a subversive plan organized from outside the island. 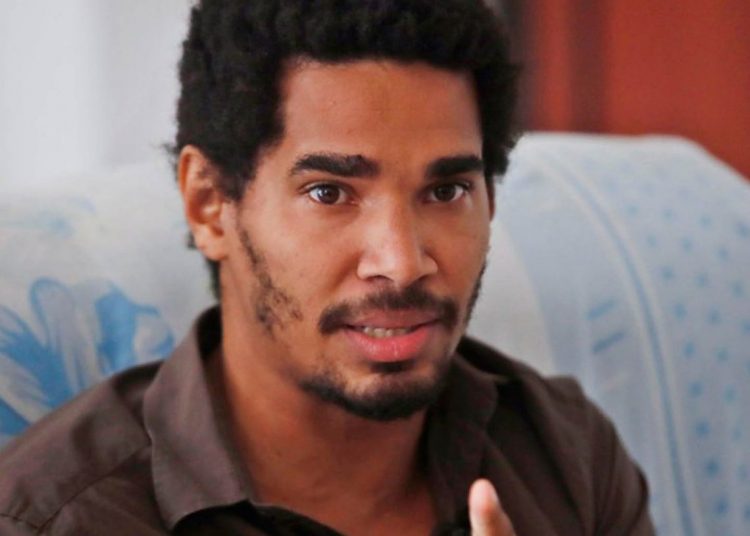 Cuban artist and activist Luis Manuel Otero Alcántara, leader of the opposition San Isidro Movement (MSI), is on his seventh day of hunger strike this Saturday, according to other opponents and those close to him on social media, while the official press calls into question the strike and considers it part of a subversive plan organized from outside the island.

Otero Alcántara went on a hunger and thirst strike last weekend, after denouncing that police forces had raided his home and had extracted and damaged works of art of his authorship. In addition, he claims to suffer harassment and a police siege, which prevents him from being visited by other activists, independent journalists and his collaborators, while also demanding a public apology and respect for freedom of expression and creation by the Cuban government, as part of his demands to abandon the strike.

In his statements cited by foreign media and publications on social networks, the artist has said that he does not intend to end the strike and that, although he does not want to die, he is willing to take it to its last consequences.

This is not the first hunger strike carried out by Otero Alcántara, 33, who already in November started another with several members and collaborators of the MSI at the group’s headquarters, which was finally interrupted by the Cuban authorities and its veracity questioned by the official press, which called it “the San Isidro farce.”

The group had started the protest demanding the release of rapper Denis Solís, a member of the Movement, who had been arrested and sentenced in a summary trial to eight months in prison for the crime of contempt.

The Cuban authorities maintain that that intervention was carried out “to certify the violation of the health protocol for international travelers” due to COVID-19, committed by the young writer Carlos Manuel Álvarez, who joined the strikers after arriving in Cuba from Mexico “without assessing the consequences of his actions.” Now, however, they have not attempted an intervention to end the new strike.

Members of the MSI and other opponents say that at this time Otero Alcántara’s health is delicate and that he shows obvious signs of deterioration. This Friday, the also opposition activist Amaury Pacheco affirmed on Facebook, citing an uncle of the artist whom he says “just visited him,” that he “no longer speaks and does not urinate” and that “he may not get to tomorrow.”

The strike has had a wide impact on social networks and has mobilized opponents inside and outside the island, as well as politicians from the United States and other countries, and organizations critical of Havana, such as Amnesty International (AI), They have also spoken out, in some cases calling for a dialogue and a solution to avoid a fatal outcome and in others encouraging other actions on the island.

The MSI had asked this Thursday on its Facebook profile to meet in squares and parks, both in Cuba and abroad in support of Otero Alcántara, and to publish photos of this on social networks. And this Friday, a group of activists who demanded to see the striker and police forces staged an incident in the central Obispo Street of Old Havana, which was filmed and published on the networks.

“The video shows how several agents—dressed as police, military and civilians—intercept the activists and, after they sit on the ground in protest and shout slogans, the authorities try to arrest some of them, which provokes the rejection of others who were in the place,” the Spanish news agency EFE reported on the event, which says that dozens of people chanted phrases such as “Homeland and Life,” which became the new slogan of Cuban government opponents, while activists and neighbors recorded the scene with their cell phones.

In recent days, opposition groups have also denounced the arrests and house arrests of activists who were trying to visit Otero Alcántara, without there being any official statement on the matter. On the other hand, there was something about the strike on Thursday night on the prime time newscast of Cuban television, in which journalist Humberto López, host of a session in that space on subversion on the island, reiterated the official version that the action of the opposition activist and all the media coverage in this regard is part of a plan financed from the United States.

López, who was recently promoted to the Central Committee of the Communist Party of Cuba (PCC), reaffirmed that hunger strikes are part of the unconventional methods of struggle that are included in the manuals of the U.S. armed forces, and questioned actions of this type carried out by Cuban opponents, including that of the MSI last November.

In addition, he showed audios of alleged conversations between Otero Alcántara and two of his collaborators with the Venezuelan Karla Velásquez, based in Mexico, whom he presented as the head of the Cuba Program of the National Democratic Institute, which, he said, finances people to carry out subversive and destabilizing plans in Latin America. In those audios, in which only the voice attributed to Velásquez is heard, she advices the Cuban opponents, in particular about the hunger strike as a method, and refers to the demands that the artist should make in the case of his strike.

López assured that Velásquez dictated those requests to Otero Alcántara and then he disclosed them as his own, and put an audio in which he talks about the hiring of a media agent to organize the campaign around the hunger strike. In addition, he emphasized the links between her and the opposition artist, to the point that the latter, he said, calls her “godmother” and the Venezuelan herself assured that she directed guided him.

Yesterday, Cuban Catholic Church Cardinal Juan de la Caridad García, “sent his foreign minister to the home of Cuban artist and dissident Luis Manuel Otero Alcántara, which was surrounded by the police, to ask him, unsuccessfully, to stop the hunger and thirst strike he has maintained for six days,” the EFE agency reported.

According to the agency “in an attempt to resolve the conflict, the foreign minister conveyed Otero Alcántara’s concerns to the Cuban authorities, without obtaining a specific response.” Regarding the dissident’s situation in his home in the popular Havana neighborhood of San Isidro and his state of health, the representative of the Church declared that he is “in very poor conditions” and is “exhausted,” reported EFE, which also assures that it tried to visit Luis Manuel Otero’s house but they could not get there because the two entrances to that section of the street were guarded by police vehicles and security agents.

The Cuban government and the official press describe opponents as “mercenaries” at the service of the United States government, with whom “there is no negotiation,” and have revealed data on the financing of opposition groups and independent media by U.S. entities. It also maintains that the MSI serves as a spearhead for a “soft coup” strategy that seeks to overthrow the island’s socialist system.