The Cuban foreign minister demanded that Bolsonaro "respect #Cuba and its health professionals who have done more for Brazilians than you," and said that Cuban medical cooperation "is an example of solidarity and altruism." 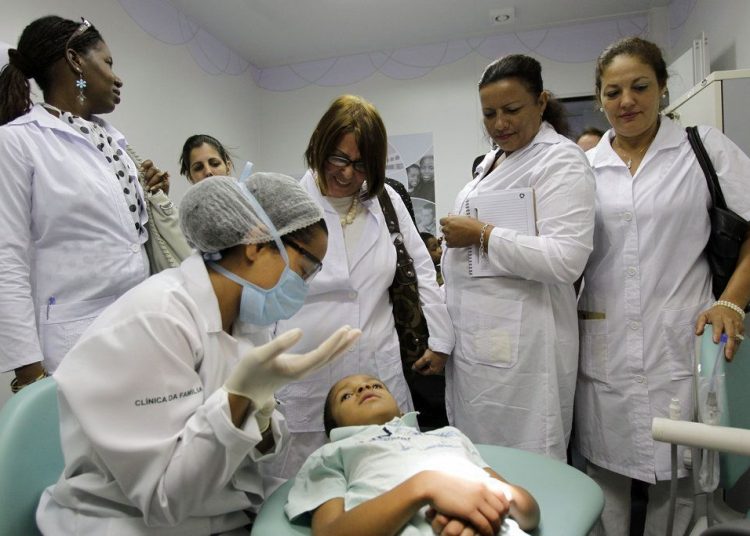 Cuban doctors observe a dental procedure during a training session at a health clinic in Brasilia. Photo: Eraldo Peres / AP.

Cuban President Miguel Díaz-Canel and Foreign Minister Bruno Rodríguez responded to Brazilian President Jair Bolsonaro, who had said that if Cuban doctors “were so good, they would have saved Hugo Chávez,” referring to the island’s doctors who collaborated in Brazil.

Díaz-Canel said on Twitter that Bolsonaro was lying “once again” and that “his vulgar slander” could never deceive the Brazilian people “who know well about the nobility and humanity of Cuban medical cooperation.”

For his part, Foreign Minister Rodríguez wrote on his Twitter account that “Pres. Bolsonaro #Brazil acknowledges being racist, sexist, homophobic and admirer of the military dictatorship. He should deal with corruption in his family, government and justice system.”

Rodríguez demanded that Bolsonaro “respect #Cuba and its health professionals who have done more for Brazilians than you,” and said that Cuban medical cooperation “is an example of solidarity and altruism.”

The foreign minister argued that more than 113 million Brazilians were treated by Cubans in the More Doctors Program in more than 3,600 municipalities.

Rodríguez’s twit was Cuba’s first response to the sarcastic comment made by Bolsonaro, who on Thursday declared that if the “Cuban doctors were so good, they would have saved Hugo Chávez.”

The Brazilian ruler added that “if the Cuban (doctors) were so good, Dilma (Rousseff) and Lula da Silva would have Cubans to treat them and not Brazilians.”

Me made his statements during the launch of the new “Doctors for Brazil” program, which will replace the “More Doctors,” the initiative created in 2013 to expand medical coverage in remote areas of the country with the deployment of Cuban doctors.

The Cuban government on November 14 ordered the withdrawal of the island’s doctors who were participating in the “More Doctors” program in Brazil following statements by Bolsonaro, who at the time described the island’s professionals as “slaves” of a “dictatorship,” and also questioned their training.

At that time, 8,471 Cuban health workers were serving in Brazil, according to Cuban President Miguel Díaz-Canel, following the decision not to continue in the program.

The participation of Cuban doctors in the Brazilian health program began in 2013 under the mandate of then Brazilian President Dilma Rousseff―of the Workers Party (PT)―with the aim of guaranteeing health care to isolated communities in the Amazon, in the favelas and poor areas of the country.

According to data from the Cuban Ministry of Public Health, in the five years of work in the program about 20,000 of the island’s collaborators treated more than 113,350 million Brazilians in more than 3,600 municipalities and Cubans constituted 80% of all the doctors participating in that initiative.