Cuban cuisine, with its traditions, regional recipes and contemporary stylizations, was the main protagonist of the 2nd Cuba Sabe International Culinary Workshop which concluded last Saturday in Havana. 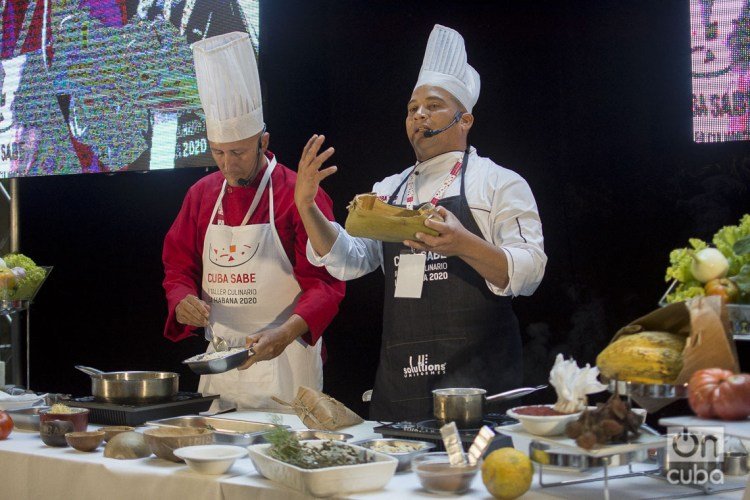 Between the very Cuban cassava and world-famous Italian pastas, between the excellence of gourmet cuisine and the interaction of the culinary with the visual arts; this is how the 2nd Cuba Sabe International Culinary Workshop, which concluded last Saturday in the Cuban capital, took place.

Around 200 delegates and guests from nations such as Spain, the United States, Italy―the guest country in this second edition―, the United Kingdom and Cuba shared three intense days at the Iberoestar Grand Packard Hotel, the venue since the first edition of an event that transcends the field of gastronomy to highlight cuisine’s cultural resonances.

Cuba’s culinary art, with its traditions, regional recipes and contemporary stylizations, was the main protagonist of the event, which shared its knowledge and flavors between lectures―among them, one on food sovereignty by Brazilian theologian Frei Betto, and another dedicated to the history and present of cassava, given by Cuban researcher Domingo Cuza―, practical lessons, tastings, exhibitions, concerts and book presentations. More than a “rescue” of Cuban cuisine, the workshop became a celebration of its recent declaration as a cultural heritage of the nation.

“This is not an event to rescue Cuban cuisine, but to appreciate its values, its traditional knowledge, and favor its dialogue with other national cuisines and contemporary culinary trends,” said Lis Cuesta, president of the organizing committee, who highlighted the place given at the event not only to chefs, researchers and artists, but also producers.

“Cuba Sabe wanted to involve the producers, the farmers, who guarantee the quality of the products that are then turned into exquisite dishes, who in culinary work are an indispensable first step not always recognized and that with their healthy, natural products, without contaminants, also contributed to our cuisine being declared a national heritage. That is why we dedicate a space to show organic, artisanal productions, with excellent quality, and the presentation of some of these independent producers,” she explained to OnCuba.

Cuesta, who is the academic services manager of the Paradiso agency of the Ministry of Culture and wife of President Miguel Díaz-Canel, affirmed that the fact that the Cuban president attended that exhibition together with Prime Minister Manuel Marrero and several ministers is “proof that there is a very important governmental, institutional willingness to support these producers, to recognize their work as an example of what can be achieved based on our own resources.”

She also praised the alliance of the Ministry of Tourism and hotel chains such as Iberostar, as well as the role of the private sector, not only for the holding of the event but to make Cuban cuisine one of Cuba’s best letters of introduction worldwide.

“Cuba is a tourist island, but its values ​​are not only sun and beach. So are our people, our history, our culture, and within it, its cuisine, and sometimes the Cuban cuisine that is offered in our hotels, in restaurants and theme nights, is always the same, and we want to bring to the table of these facilities all its variety, all our culinary wealth, and that this also contributes to the quality of the tourist service, that it takes it to the levels to which we aspire,” she said.

“The private sector has helped a lot in this regard, because it has opted for Cuban cuisine with great consistency, with great beauty in the preparation of its dishes and its menus. There are many restaurants that have specialized, that have recovered recipes from different regions of the island, that have reassessed our traditions and have innovated based on them, and that has been very important for tourism,” added Cuesta, who confirmed Cuba’s wish that its cuisine be recognized as heritage by UNESCO, a commitment, she said, “on which we are working with the Ministries of Culture and Tourism and the Culinary Association.”

Art in cuisine, cuisine in art

Visual arts and the Academy of San Alejandro were especially honored during the second edition of Cuba Sabe. If the mornings of the event were dedicated to eminently culinary themes, the afternoons discovered the sui generis ties between cuisine and the visual arts.

Theoretical-practical workshops on carving in fruits and vegetables, on modeling in fondant and shortening, on decoration of dishes, and exhibitions of paintings and photographs with gastronomic themes, animated the evening sessions of the event and gave the attendees a different look from what happens in kitchens.

The presence of Cuban art was also extended to books such as Sabor Cubano, by Patricia Belatti, which combines recipes with works by the island’s creators, and with the prominence in the artistic conception of the lunches by National Visual Arts Prize winners Nelson Domínguez and Eduardo Roca “Choco,” who did not hesitate to wear the apron.

“It has been a great opportunity,” acknowledged Lesmes Larroza, director of the Academy, during the opening of the exhibition called “Cooked in San Alejandro,” “because visual artists are not used to addressing the subject of cooking in the way it has been in Cuba Sabe and participating here has motivated us to get closer to this perspective, to discover its artistic possibilities not only as a subject but also as material for creation.”

“The event allowed professors from our Academy to share with chefs who are also artists, to make with them different pieces with elements of traditional cuisine, and we are very grateful that our two expressions have been linked,” he added. “I think this will be a first step to insert Cuban cuisine in our plans and study programs, and that it can be more represented by artists, because it is an unquestionable part of our cultural identity.”

From Cuba to the world, from the world to Cuba

José Souto, a British chef with Spanish roots, who was in charge of one of the practical lessons of Cuba Sabe, came to Havana from London.

Souto, a professor at the prestigious Westminster Kingsway College and who is currently linked to a collaborative project between the island and the United Kingdom, had in this event his second culinary demonstration on the island in a few months and, as he said to OnCuba, he was “delighted with the country, its people, and its cuisine, of course.”

“Cuba is opening more and more to the world, and people are interested in its cuisine and wanting to learn the dishes and ingredients from here,” he said and as a sign of that interest he said that in his institution they recently included Cuban cuisine in a tasting menu prepared by the students, for which they had to investigate and learn recipes from the island like ropa vieja.

Participating in Cuba Sabe, said Souto, was for him part of a two-way learning process, an interconnection that not only helps to make Cuban cuisine visible beyond its borders, but also to strengthen it from the necessary assimilation of other influences

“For me it has been very enriching to be here because I have learned new things, for example, about cassava, its history and its uses in cuisine, which are practically unknown over there,” he said, “and the lecture given at the event on this typical Cuban food opened my eyes to all the different things that can be done with it. As well as with other dishes.”

“And at the same time, being here with chefs from other countries contributes to providing Cuban colleagues with other perspectives. It is an important and productive exchange at a time when cuisine is increasingly international and more recognized and appreciated for its cultural values.”

That desire for intercultural dialogue will also brighten the third edition of Cuba Sabe, which will be held from January 14 to 16, 2021 and which was convened on the closing day this Saturday.

Asian cuisine, and particularly Chinese―with a long-standing presence on the island―will be the foreign guest, while for Cuba the event will be dedicated to the culinary traditions of the central province of Sancti Spíritus.

The artistic expression honored this time will be design, which provided an appetizing advance with a unique fashion show in which, along with professional models, artists such as Alain Pérez and Cucú Diamantes paraded, as well as several of the chefs participating in the event.

In addition, the official constitution of the Cuban Association of Sommeliers was announced at the close of the event―which President Díaz-Canel and Prime Minister Marrero again attended―, a long-cherished wish by the island’s expert tasters, which will join the culinary and bartender associations in the preservation of Cuba’s gastronomic legacy.