Given the insoluble lack of chemical fertilizers, the country has directed efforts and money to mitigate the demand for nutrients of many of its crops with the production of natural bioproducts. 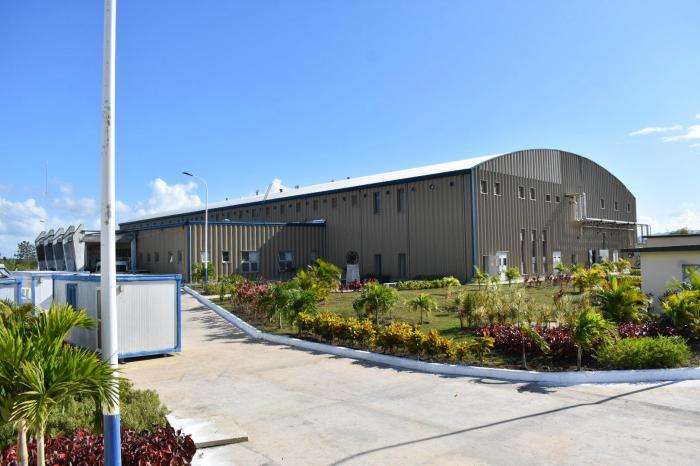 Biopesticide and biofertilizer plant in the province of Villa Clara. Photo: Radio Caibarien.

The fertilizer deficit suffered by Cuban agriculture is critical. The country, which in 2017 consumed around half a million tons (t) of fertilizers for a rate of 90 kilograms per hectare (kgs/ha), in 2021 — with imports and domestic production — only reached a very modest 8 kg/ha.

National production does not cover the demand for fertilizers. The island has traditionally produced chemical fertilizers, but the accumulation of financial difficulties to import raw materials, and the questionable management of its own resources, has resulted in a decrease in national production levels.

Domestic shortages and the drop in national imports, also for financial reasons, have complicated the scenario for Cuban agriculture.

Given the insoluble lack of chemical fertilizers, the country has directed efforts and money to mitigate the demand for nutrients of many of its crops with the production of natural bioproducts.

An attempt not “to substitute fertilizers,” as Master in Sciences Dagoberto Rodríguez Lozano, director of Soils and Fertilizers of the Ministry of Agriculture, acknowledged to the Agencia Cubana de Noticias (ACN) news agency, “but to nourish the plantations as much as possible.”

Well, agricultural yields also face soil degradation. Cuba has an area of ​​11 million hectares, and of these, 6.4 million are for agricultural use. But, as was warned by Doctor of Science Luis Gómez Jorrín, head of the Soil Institute, 70 percent of arable land is affected by at least one limitation to produce, such as erosion, low fertility, low content of organic matter, compaction, or salinity.

In this sense, the alternative of biofertilizers is not only an option due to the lack of the necessary chemical products. It is also a vital bet for the efficient management of our very battered soils.

In pursuit of the increase in the production of bioproducts, an ambitious program assumed by Labiofam includes the installation of three industrial complexes in Havana, Granma and Villa Clara, with the purpose of reviving and strengthening agricultural activity.

The total cost of the investment exceeds 80 million dollars. But, although they have been working on them for almost a decade, the results are still pending.

What has happened to Villa Clara’s industry?

In 2013, the construction of the Biofertilizers and Biopesticides Plant began on the outskirts of the city of Santa Clara. Scheduled to begin production in 2016, it is not yet in operation.

The initial investment in this plant was 29 million pesos, which over the years became 60 million.

Based on the exclusive processing of Cuban raw material, the plant could contribute annually about 1,000 tons of BioRat — a poison to eliminate rodents and pests — and 6 million liters of biofertilizers and biopesticides, worth more than 80 million pesos.

The Santa Clara factory had to supply these products to the entire central region of the country; it would benefit some 600,000 hectares of crops and would allocate a part for export to the Latin American and Caribbean market.

By way of imports, it would save the country the purchase of fertilizers such as urea, with a cost in the international market that ranges between 800 and 1,000 dollars per ton, not including transportation costs.

Although the planned start-up date was the already distant year 2016, according to a report by Juventud Rebelde, in 2017 work was still underway on the assembly of the energy block, the foundation of the production block and that of the rice silos, among other works.

In 2019, according to information recorded by the Villa Clara provincial weekly Vanguardia, brigades from the territory’s Construction and Assembly Enterprises were working on the installation of ventilation and air conditioning systems, and even on part of the equipment.

Later, in October 2020, when Cuban President Miguel Díaz-Canel Bermúdez, together with the Council of Ministers, arrived on a government visit to the province, clear numbers were revealed: the industrial assembly of the work was at 51%.

Still in June 2021, when Vice President Salvador Valdés Mesa included the project in his work tour of the province, the factory was 85% complete in civil construction and 53% in the installation of essential systems such as condensation, fermentation and water treatment.

Finally, at the end of last year, the civil completion of the work was at 86% and the industrial phase had reached a modest 57%. The opening date that is currently handled, with a minimum of conditions, is the last quarter of 2022.

As in the factory located in the central region of the island, work has been underway in recent years on the installation of this type of industry in Havana and Granma.

All with modern technology from China and from other countries, such as Canada, and with laudable prospects, not only economic, but also for the care of the environment and the country’s progress towards a more ecological agriculture, according to what engineer Teobaldo Cruz Méndez, principal investment specialist of the Labiofam Higher Organization of Business Management, told Granma newspaper

But also in all cases, with a fate marked by problems common to the country’s investment processes: recurring financial difficulties, delays in importing equipment and irregularities in planning and contracting, among others.

The capital’s plant, conceived as an industrial complex, since 2015 made the investment to assume the manufacture of bioproducts to supply the west of the country. More than five years later, in 2021, the work was at 88.1% of the industrial assembly and 99% completion of the civil structure, lacking three fundamental systems for completion: the general power distribution plant, the waste treatment plant and the firefighting systems.

The same has happened with the Granma industry. It is being built in the city of Bayamo since 2017 and is recognized as the most backward in the entire program. Its close to 27-million-peso investment, and the completion plans within a maximum period of three years remain on hold. Their contributions to agricultural activity in the east of the country and to exports have also been suspended.

Certainly, these new plants are not the only ones of their kind on the island. Four facilities have been operating since the 1990s in the municipalities of Güira de Melena, Güines, Matanzas and Sancti Spíritus. Annual production in Cuba amounts to 1,180 t of biofertilizers and 1,200 t of biopesticides, which cover about 26% of the total demand.

But the total production of the three factories still to be completed should multiply up to eight times the obtaining of biofertilizers, biostimulants and biopesticides and cover almost all the domestic demand; with the production, among other products, of Biobras 16, a biostimulant for crops, which just in rice can increase its yield by up to 25%.

In practical terms, Cuba could assist almost one and a half million hectares of land with these additional productions. The country would reduce a considerable number of its imports of chemical products and could begin to make its way in the international market.

But the new facilities do not startup. Meanwhile, the future of agricultural results and of food on the table in Cuba continues to hang on the invisible thread of unfinished cycles and unmet goals.

Agnieska Hernández: “I try to sow a poetic seed that helps us to be more tolerant....”