More than ever warmongering rhetoric has taken over the discourse and many people are beginning to incorporate it into their daily lives as something inevitable. 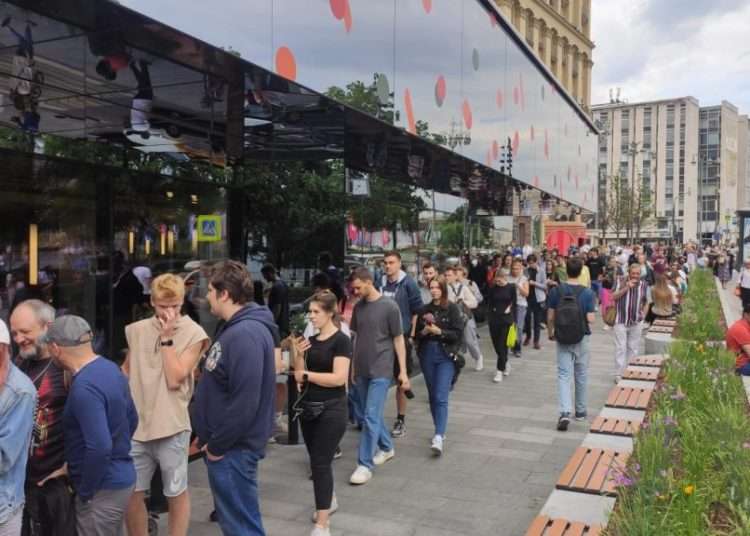 On any day in Russia. Photo: author’s personal archive.

On February 24, the world woke up to news that seemed to be taken from a Hollywood script. Russia’s attack on Ukraine caught analysts and ordinary Russians alike by surprise. Very few calculated the event that would drastically change geopolitics and the world situation.

What has happened since then continues to cause stupor, not only because of the horror of any war, but also because of the wave of restrictive measures derived from the conflict, in some cases of manifest hypocrisy. But not even the strongest sanctions ever implemented against any country (although this is far from the only aggression of its kind in recent history) have achieved their stated goal: to force Russia to stop the war and withdraw.

On the contrary, despite the pressure and economic wear and tear that they entail for the country, the drums of war continue to resonate strongly and do not seem willing to be silenced. More than ever warmongering rhetoric has taken over the discourse and many people are beginning to incorporate it into their daily lives as something inevitable.

While in Ukraine the dead and displaced are increasing, in Donbas (Russian justification for starting this chaos) they have not been better since then. The victims are on both sides of any line of fire. And also beyond, ordinary people who suffer the consequences of the decisions made by others.

The sanctions are already beginning to be noticed not only in the lack of this or another brand, but in the production chains of the Russian articles themselves, which often do not receive the necessary components for their manufacture, the same goes for a car, a smartphone, a medicine or a simple treat. And experts predict it will get worse.

Everything is further complicated by the difficulties of banks, sanctioned or not, to obtain or exchange currencies, as well as to make transfers to and from Russia, especially after the disconnection of the SWIFT system. This affects the great oligarch and the simple mortals, who find it difficult to manage and dispose of their savings.

Worse is the rise in prices, sometimes shooting up to 300%, even though the ruble has managed to “stabilize” at pre-crisis levels.

With the new normality comes a “new McDonalds” that, under the commercial name of “change the name, love remains,” offers similar foods in the same network of establishments previously occupied by the American fast-food chain. As happened when the emblematic firm arrived in 1991, its Russian successor opened with long lines of curious people willing to try and compare.

Life and plans go awry with the unprecedented blockade of Russian airlines and the ban on flights to Europe and other parts of the world, which makes it almost impossible to leave or enter Russia, except through Turkey or Asia.

We add to this decisions on the Russian side, such as leaving the European Educational Area (which implies the future complication for the recognition of studies for university graduates, for example); or the blockade for “not complying with the laws” of Facebook and other social networks or internet services; measures that increase the feeling of “claustrophobia” in part of the population, who sometimes choose to travel outside the country without a return ticket.

With a sharp turn of the helm of totalitarianism, Putin seems to have strengthened his power, while the critical voices are heard increasingly, literally muffled or distant.

And although there are many who have family, friends, in Ukraine and who are hurt by what is happening, that is not usually the part of the story that comes out in the media. There are as many or more who feel identified with Donbas. With the also tragic stories of the suffering they have been experiencing for years, which has now only increased and has not been seen much on Western screens either. Added to this is the pain caused by the casualties of these four months, mostly young people who, until very recently, had never heard a shot or thought they would ever be in such a situation.

But the great masses are getting used to the new conditions and to euphemisms such as “special military operation,” which they see as something that was inevitable. On the other hand, propaganda and the sanctions themselves have worked together to make many feel attacked by the “West.”

Perhaps this is also partly explained by Russian history and mentality, that of a country forged in a thousand wars, which makes some prefer that the world fear Russia before it understands it. And when she feels harassed, she wants to show courage at all costs, like a wounded beast. Therefore, the more external pressure, the less chance there is for things to return to their peaceful course.

The older ones are used to the ups and downs of the post-war period, socialism, and take it as “it is what it is.” Young people bear the brunt of this kind of disconnection from the world, something unthinkable in the 21st century and even more so for those who were born without so many walls or rigid borders. They are also the most affected in their vital and economic aspirations.

Everyone agrees that nothing will ever be the same again. And while geopolitics continues to do its thing, many ordinary Russians, and others who live here, try every day to survive in this “new normal,” worse than that of the pandemic itself.

Agnieska Hernández: “I try to sow a poetic seed that helps us to be more tolerant....”