Ciclos Minerva, from Villa Clara, is taking on the production at the proposal of the Ministry of Transportation, as an alternative to the fuel shortage affecting public transportation on the island. 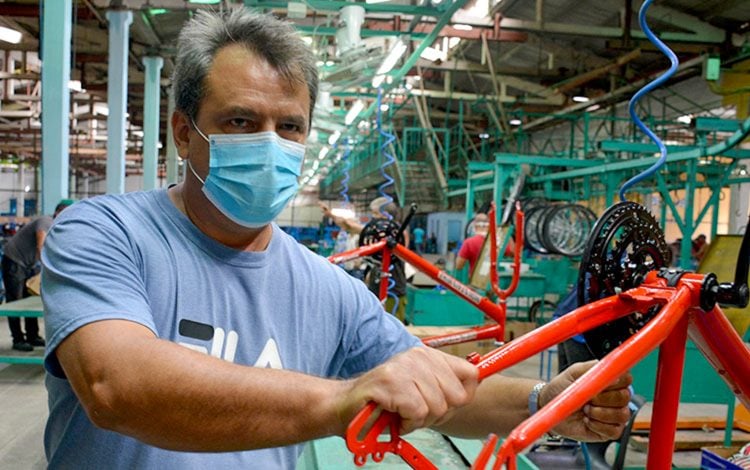 A Cuban state enterprise plans to manufacture 6,270 mechanical bicycles as an alternative to the transportation crisis that the island is currently experiencing due to fuel shortages.

The bicycles – manufactured by the industrial company Ángel Villarreal Bravo (Ciclos Minerva), of Villa Clara – will be used for social purposes, with preference given to universities, according to Madeleine Vargas, director of the Industrial Equipment and Services Enterprise (EIESA), cited by the provincial newspaper Vanguardia.

Financed by the State budget, “the first thousand are already being produced and we must continue with the rest of the batch as of June. Here we manufacture the metal parts (frame and fork) and import the other components from China,” clarified the deputy director of Ciclos Minerva, David Rodríguez.

The executive acknowledges that the initial amount is insufficient “in a market that has been short of supplies for years,” but he hopes that this figure can grow both through state financing and the enterprise’s own self-management capacity.

The enterprise is prepared to manage the liquidity generated by this product on its own, with a part of the income foreseen for investments, replacement of equipment, purchase of raw materials, and other necessary expenses so that the production does not stop, and that way also attract foreign exchange. Meanwhile, with the other part it began to buy supplies to produce the mechanical bicycles, which will be sold in Cuban pesos, the source indicated.

In addition, the Villa Clara entity has diversified its productions, among which are now warehouse shelves for enterprises of the tourism sector, and zinc doors for the National Housing Program.

Likewise, it manufactures electric tricycles with “a high degree of integration,” as a great deal of the equipment is produced by the national industry. For the annual cycle of 1,800 cycles, it is a “priority” to acquire parts in national markets at lower prices, said the manager.

According to Rodríguez, “the Pinar del Río electronic components factory makes electrical boxes and chargers, and is making an investment to manufacture batteries. We are also looking for the possibility of buying all the metal we need in the country.”

“In the case of electric mopeds, we used to limit ourselves to assembling them; but we have already started to buy the tube to make the frameset here, substitute another import and save foreign exchange,” he concluded.