The principal investigator of the clinical trials, Arturo Chang, pointed out that as part of the studies, the levels of antibodies have been evaluated, which turned out to be higher than those of convalescent patients without vaccination compared to those who received two doses of Soberana 02 plus the booster dose of Soberana Plus. 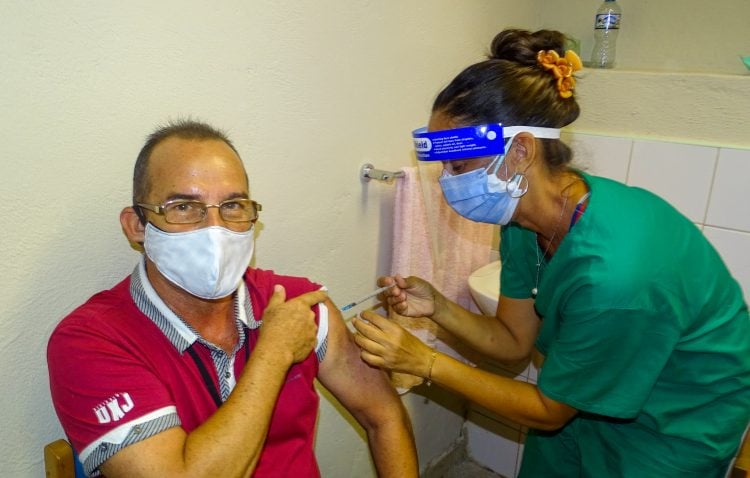 Volunteer in the intervention study gets Soberana Plus jab. Photo: @cneuro_cuba Twitter.

About to conclude the inoculation of the volunteers of phase II clinical trial with the Cuban Soberana Plus vaccine candidate, its developers affirm that the convalescents from COVID-19 who received this drug are those with the most antibodies against the coronavirus in Cuba.

The principal investigator of the clinical trials, Arturo Chang, pointed out that as part of the studies, the levels of antibodies have been evaluated, which turned out to be higher than those of convalescent patients without vaccination compared to those who received two doses of Soberana 02 plus the booster dose of Soberana Plus, reported the Agencia Cubana de Noticias (ACN) news agency.

Cited by the agency, Chang clarified that these results were obtained in a previous Phase I trial based on the comparison of the antibodies developed by those inoculated with the injectable, created by the Finlay Vaccine Institute, in relation to those produced naturally when infected with SARS-CoV-2.

“Those people who recovered from the disease and were left with high antibody titers became part of the robust panel of Cuban convalescents, difficult to overcome, but after a dose of Soberana Plus in those who suffered from the virus — and were left with low antibody titers — it was possible to match and even exceed the panel,” explained the expert, who, however, did not offer figures to detail the comparison.

Likewise, the specialist stressed that the vaccine candidate has the potential to increase the immunity of convalescents with the application of a single dose, and assured that so far few adverse events have been registered “so it does not offer any risk to elderly people.”

Chang said that several of the participants in the clinical trial have been in direct contact with SARS-CoV-2 positive cases and so far none have been infected. He also recalled that Soberana Plus is used as a booster dose in one of Soberana 02’s vaccination schedules, although he did not rule out that it could be used to reinforce the immunization of other Cuban vaccine candidates and even foreign vaccines.

The drug also serves to increase antibody titers in convalescent patients who are donors of the plasma used in the manufacture of hyperimmune gamma globulin against SARS-CoV-2, which is used in the treatment of COVID-19 patients in serious and critical stages, the researcher added.

Regarding the Phase II clinical trial, Chang explained that “it was practically a Phase III design, except for having a smaller number of volunteers,” but he specified that “it did include convalescent patients with compensated chronic diseases and from the 60- to 80-year-old group.” He said that the study was divided into a Phase IIA, with 20 subjects, and a Phase IIB with 430 convalescents, the last of which will have been immunized after 28 days on June 7.

As of that date, the volunteers who received placebo will be vaccinated, “so that all the convalescent patients who were included can be protected,” concluded the specialist.