According to figures given by executives from the sector, the production of eggs in Cuba currently exceeds five million daily, “although there is still a high potential to increase production.” 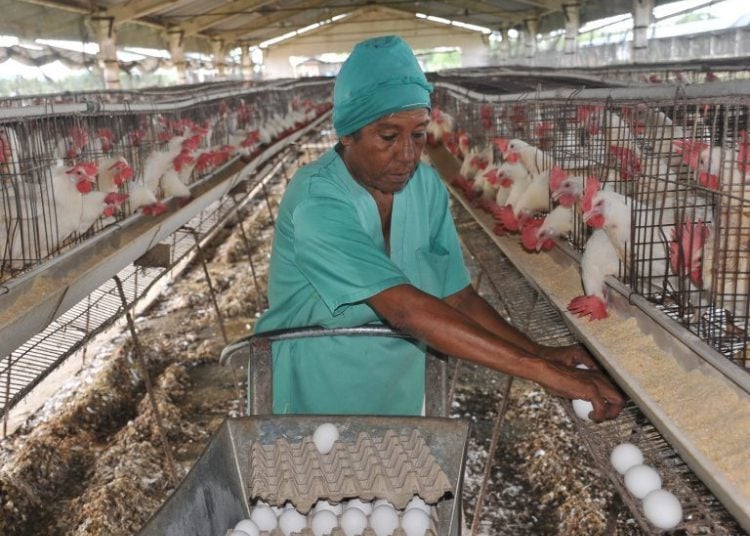 Cuban poultry farming has not yet fully recovered from the damages caused by the devastating Hurricane Irma, which two years ago affected a great deal of the island, this sector’s executives acknowledged this Wednesday.

Irma damaged around 700 poultry barns throughout the country, mainly in the provinces of Villa Clara, Ciego de Ávila and Camagüey, among the most affected, while it is estimated that about 10,000 hens died. This data has not been officially mentioned by the authorities, but who have referred to the “stress” suffered by the surviving animals.

Poultry farming “has repeatedly been forced to practically be born again” due to the passage of different meteorological events, among which Irma stands out for its destructive power, said Norberto Espinosa, president of the Livestock Business Group (GEGAN), in the Mesa Redonda television program, which dedicated its 55th Wednesday edition to the National Poultry Conglomerate (CAN).

Irma’s winds “damaged the structures of enterprises from Holguin to Artemisa,” while the halt of most of the thermoelectric plants in the country affected the pumping of water for poultry activity, said Espinosa, who described the effort made to recover the productive structure after that disaster as “heroic.”

The official also attributed the difficulties in recovering to the measures of the U.S. government against Cuba and the current energy crisis that the island has been experiencing since last September as a result of these measures, although he affirmed that “work and progress has been made for several months in the recovery of poultry in the country” and that “for 14 days there has been a permanent rise in production.”

In addition, he said that the Cuban State prioritizes investment in this sector, to which it allocated more than 12 million dollars this 2019, according to statements cited by the official Cubadebate website.

According to figures provided by Espinosa, egg production in Cuba currently exceeds five million daily, “although there is still a high potential to increase production” and next year they expect to reach 40 million more eggs.

At the current rate, the island would not reach the amount for 2018, when there was a production of more than 2.778 billion―the highest figure in the last five years―, of which about 1.95 billion was produced by state poultry enterprises, according to data published by the National Bureau of Statistics.

Last February, the Cuban government recognized problems with poultry feed supplies due to “noncompliance” in local production and imports, in the midst of a prolonged shortage of eggs, which until today limits its non-ration-book sale on the island, while its rationed distribution is maintained.

Cuba has more than 250 production farms, 64 hatcheries, 21 breeder farms and 106 egg production farms, according to data published by the Cuban News Agency, which also reports that this activity receives every year between 15 and 20 million dollars in fundamental inputs, and consumes 39,000 tons of feed monthly.

According to the executives from the sector, 9,500 tons of poultry meat are also produced on the island and there are foreign investment projects that, “if consolidated,” would allow for the production, “using high technology,” of 100,000 tons of chicken meat.