The president now holds the position of President of the Republic, recovered by the island’s new Constitution. In addition, the presidency of the National Assembly was confirmed and the new Council of State was elected, which now has 21 members instead of the previous 31. 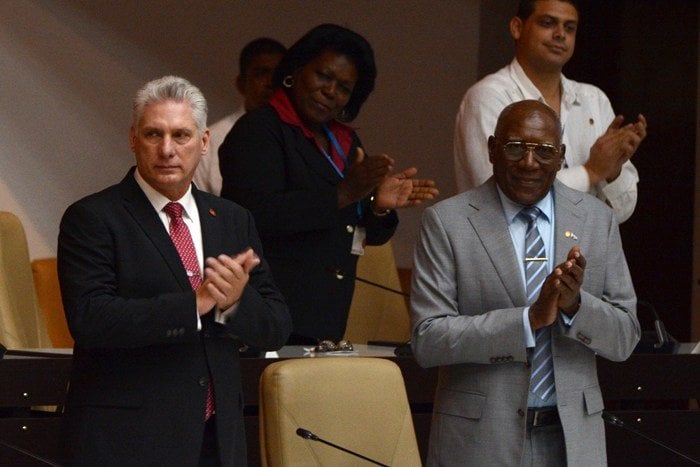 Miguel Díaz-Canel (left) and Salvador Valdés Mesa (right) were confirmed as President and Vice President of Cuba by the National Assembly, on October 10, 2019. Photo: ACN

Miguel Díaz-Canel was confirmed as president of Cuba by the island’s National Assembly during the extraordinary session of the legislative body held this Thursday at the Havana Convention Center, in which the new Council of State was also elected as well as the presidency of Parliament.

The Assembly―made up of 605 deputies, of which 580 were present―elected Díaz-Canel as President of the Republic, as the position of president is again named according to the new Cuban Magna Carta, which recovered it nominally after more than 40 years of absence in the island’s political scene.

He was elected by “absolute majority,” with 579 votes.

Until Thursday, Díaz-Canel, 59, held the position of President of the Councils of State and of Ministers, which disappeared in the Constitution in force since April, which establishes deconcentrating the Executive branch as compared to the model that governed in Cuba for decades.

He had been elected as such by the National Assembly in April 2018, taking over the presidency from Raúl Castro―who, however, remained at the head of the Communist Party (PCC) and as a deputy―and became the island’s first President to not bear the surname of Castro since the approval of the previous Magna Carta in 1976.

Bachelor of Electronic Engineering in 1982, he held several positions in the structure of the PCC, including those of first secretary in the central province of Villa Clara and in eastern Holguín. In 2009, under the mandate of his predecessor, he became Minister of Higher Education. Three years later he was appointed Vice President and then elected First Vice President of the Councils of State and of Ministers, until in 2018 he finally held the presidential chair.

In this position, he has defended a discourse that insists on the “continuity” of the precepts of his predecessors and on the construction of a “prosperous and sustainable socialism,” and he has strengthened alliances with “strategic” partners of the island such as Russia and Venezuela, maintaining his “unrestricted support” of the latter’s president, Nicolás Maduro, in the midst of the political crisis that is shaking the South American country.

His mandate has also been marked by a setback in relations with the United States, after the thaw experienced in the last years of the Obama administration, as well as disasters such as the May 2018 plane crash in Havana that caused the death of 112 people, and the devastating tornado suffered by the Cuban capital in January of this year.

In addition, he has had to face a complex economic situation, whose most recent chapter, marked by the fuel deficit, forced his government to recover savings measures that were not seen on the island since the so-called Special Period, the severe crisis of the 1990s

Similarly, in his year and a half at the head of Cuba, the process of the constitutional reform was completed, which ended with the approval in a referendum of the new Magna Carta, and the salaries and pensions of a large sector of state workers were raised.

Now, with his election as President of the Republic, Díaz-Canel will be responsible for the country’s policy, foreign relations and the Armed Forces, and in the coming days he will propose a Prime Minister, who must be approved by the Assembly and will head the Council of Ministers.

He will continue to be accompanied by Salvador Valdés Mesa, who―following the letter of the Constitution―goes from being First Vice President of the Councils of State and of Ministers, to Vice President of the Republic, a position for which he was elected this Thursday by the National Assembly, in a session that coincided with the 161st anniversary of the beginning of the wars of independence against Spain.

Valdés Mesa, 74, is a member of the Political Bureau of the Communist Party of Cuba (PCC). Before being elected Vice President in 2018, he had been general secretary of the Central Organization of Cuban Trade Unions (CTC) and first secretary of the PCC in the province of Camagüey, among other Party and government positions.

The Constitution establishes that the president and his vice shall serve for five years and may be re-elected consecutively only once.

“Today begins a new stage of work for those of us who represent the State and the Government,” Díaz-Canel said in a speech after assuming the new position, in which he affirmed that “the number one task has to be the future” and said, as he did a year ago, that he would not make any promises, but would fulfill “the mandate of the revolutionary people.”

The president’s address was broadcast in real time through the Cuban Presidency’s account on Twitter, since the television broadcast of the parliamentary session, to which in addition the accredited foreign press on the island was not allowed access, had a two-hour delay.

Díaz-Canel established as priorities of his government “exports, foreign investment, housing construction, food production, tourism, transportation and renewable energy sources,” and called for “resisting” to overcome the current energy crisis in the country due to fuel shortages.

In this regard, he called for “reducing expenses and to save,” as well as “systematizing the good solutions born of the toughest years of the Special Period.” He also referred to the United States, an “empire, old and demoralized” headed by a “horde of mediocre and mendacious politicians,” once again blamed the Donald Trump administration for the economic problems Cuba is experiencing and again accused the neighboring country of wanting to dominate the island.

“Whoever tries to appropriate Cuba, will collect the dust from its blood-soaked soil, if he doesn’t perish in the struggle,” he said, quoting independence hero Antonio Maceo in his speech, also full of references to Fidel Castro and other historical leaders of the island, and which he closed with the traditional slogans of the political discourse of the Cuban Revolution.

Presidency of the Assembly and Council of State

The presidency of the National Assembly was also confirmed in this parliamentary session on Thursday, which, according to the current Magna Carta, will also head the Council of State, which went from 31 to 21 members.

In this way, Esteban Lazo will be in charge of the Assembly and the Council of State, at least until 2023, when the current legislature―the ninth―of Parliament will end its functions. Lazo, 75, has chaired the legislative body since 2013, and previously had held several political positions on the island, including that of first secretary of the PCC in the provinces of Santiago de Cuba and Havana, and that of vice president of the Council of State between 1992 and 2013.

Meanwhile, Ana María Mari Machado and Homero Acosta were confirmed as vice president and secretary of the Assembly, as they had been elected a year and a half ago.

As for the Council of State, it was composed of 21 members, including its president, instead of the 31 that made it up until now, reducing by 10 the number of that Assembly body.

The list of elected members includes 17 of its previous members, in addition to the presidency of the Assembly, and the leaders of official organizations such as the Central Organization of Cuban Trade Unions (CTC), the Federation of Cuban Women (FMC) and the Committees for the Defense of the Revolution (CDR).

On the other hand, the now elected President and the Vice President of the Republic―who until now directed this body―, and other figures who hold government positions, are no longer members of the Council of State, as established in the new Constitution.

Among those now absent, names such as those of Commanders Ramiro Valdés and Guillermo García―two historical figures of the Cuban Revolution―stand out, as well as Foreign Minister Bruno Rodríguez; General Leopoldo Cintras Frías, Minister of the Armed Forces; Gladys Bejarano, Comptroller General; writer and ethnologist Miguel Barnet, and until now vice presidents of the Council of State Roberto Morales and Inés María Chapman.

The Council of State is the organ of the National Assembly that represents it between sessions. It executes its agreements and fulfills the other functions attributed to it by the Constitution. According to the Magna Carta, it has a collegial character and holds the supreme representation of the Cuban State, both nationally and internationally.

Elected members of the Council of State

– Jorge Amador Berlanga, Dr. in Biological Sciences and researcher of the Academy of Sciences of Cuba

– Rosalina Fournier, director of the Design and Engineering Enterprise in Guantánamo

– Felicia Martínez, industrial engineer and director of the ALUME enterprise

– Carlos Rafael Miranda, national coordinator of the Committees for the Defense of the Revolution

– Susely Morfa, first secretary of the Union of Young Communists

– Miriam Nicado, rector of the University of Havana

– Elizabeth Peña, head of the Ministry of Agriculture’s National Group of Urban, Suburban and Family Agriculture

– Alexis Lorente, president of the Municipal Assembly of Sancti Spíritus