The Spanish foreign minister reiterated in Havana the rejection of Spain and the European Union (EU) of the "extraterritorial and unilateral measures" imposed by Washington. 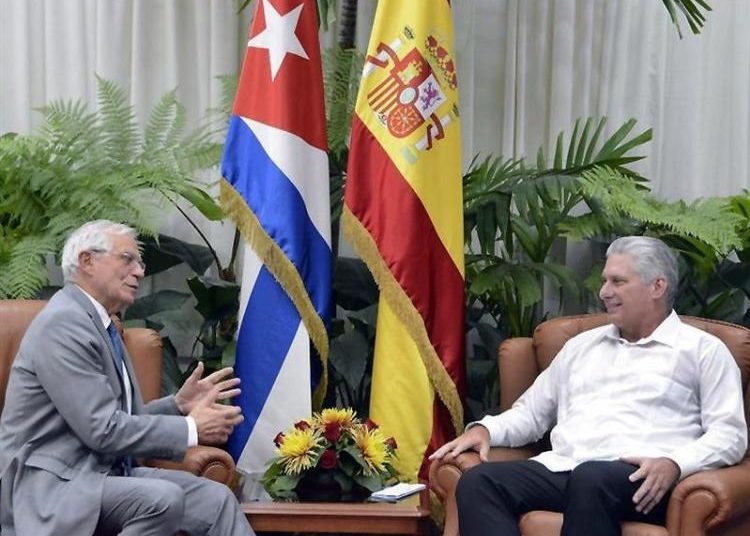 Cuban President Miguel Díaz-Canel received this Wednesday Spanish Foreign Minister and future head of European diplomacy Josep Borrell, on an official visit to Havana, where the king and queen of Spain will travel in November.

In a cordial “environment,” Borrell and Díaz-Canel “discussed the positive relations between Spain and Cuba, based on historical, familiar and cultural ties, and expressed their willingness to continue working to strengthen them,” said a brief note about the meeting read on Cuban television.

The statement made no reference to the announcement made this Wednesday by Borrell that King Philip and Queen Letizia will travel to Cuba in November for the celebration of Havana’s five hundred years.

It is a historical event, since it will be the first state visit of a Spanish monarch to the island, the only Latin American country Philip VI has never been.

Together with Borrell, the meeting was also attended by Secretary of State for International Cooperation and for Latin America and the Caribbean Juan Pablo De Laiglesia and the Spanish ambassador to Havana, Juan Fernández Trigo, while Foreign Minister Bruno Rodríguez and the general director of bilateral relations Emilio Lozada attended for the Cuban side.

The meeting with Díaz-Canel did not appear on Borrell’s official agenda during his first day in Havana, although it was expected that the president would receive the Spanish minister given the current good state of relations between Spain and Cuba.

Before the meeting with Díaz-Canel, the Spanish minister also met with the vice president of the Council of Ministers and former Cuban minister of the economy Ricardo Cabrisas and with the current minister of culture, Alpidio Alonso.

In the morning the head of Spanish diplomacy headed his country’s delegation present in the high-level political dialogue held with the Cuban government, a bilateral mechanism agreed during the visit to Cuba by the Spanish head of the executive, Pedro Sánchez, in November of last year.

“Issues of common interest, which are many,” were addressed during the dialogue, and the Cuban delegation presented, among other issues, the serious economic and fuel supply problems arising from the new tensions with the United States, which has intensified the embargo on the island.

Borrell reiterated the rejection of Spain and the European Union (EU) of the “extraterritorial and unilateral measures” imposed by Washington and pledged support for Spanish companies operating on the island and which are being affected by the intensification of sanctions.

This will be one of the last trips of the politician as Spanish foreign minister, since in short he will assume the position of high representative of the European Union (EU) for Foreign Policy replacing Federica Mogherini.

In recent years Cuba and Spain have strengthened their bilateral ties, which crystallized in the visit to Havana of the president of the Spanish government, Pedro Sánchez, in November 2018, and will have a new milestone with the State visit of the king and queen.

Spain is Cuba’s third trade partner and the main one in Europe, with an important presence of Spanish companies on the island, especially in the tourism sector.