In spite of the merits of what has been announced, it is the beginning of urgent changes and barely the unblocking of an import restriction present in a marginal area of ​​consumption. 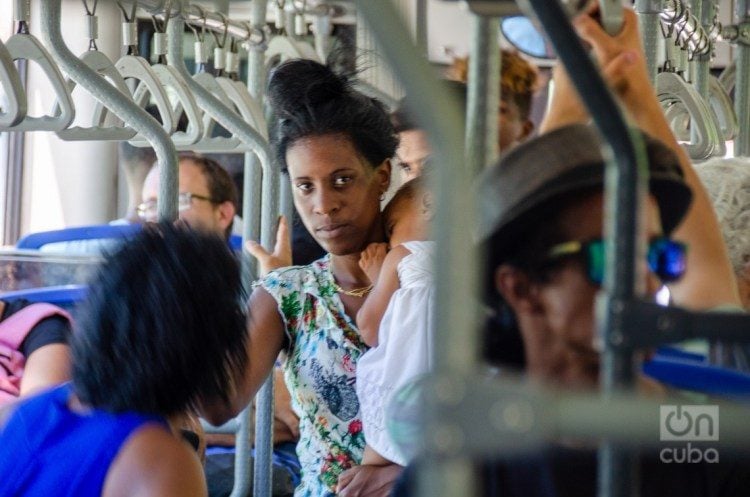 Cuban Vice President Salvador Valdés Mesa, flanked by several ministers, announced on the Cuban Mesa Redonda TV program that the government will set up a group of state-owned companies with financial and commercial mechanisms to import and sell in convertible foreign currencies products that were frequently imported from abroad by individuals. It is an action of common sense, the same as philosopher and mathematician Blaise Pascal said that is frequently “the least common of senses.”

There are many underdeveloped countries in the world, but in almost none is it common to see at airports people loaded with extremely large duffel bags, bringing air conditioners, televisions, toasters, or spare parts for Lada cars from Miami. Those travelers are generally Cuban.

Isn’t the distance from Russia to Cuba almost the same as from Russia to Miami? How many Lada or Moskvich cars are running in Miami, Fort Lauderdale or Panama to justify the stores there selling spare parts for those makes?

What the government has noticed and now tries to stop was an open secret. Several academics and officials often commented on this overt flight of foreign currency, without major problems, looking for ways to channel it to make a profit. The issue was confirmed by the calculation of 240 million dollars in Cuban purchases that the director of the Colon Duty Free Zone mentioned when questioning the visas used by the island’s travelers when visiting Panama.

If there was already a duty free zone in Cuba, with a special regimen to operate in convertible foreign currency, it was not logical for Cubans to spend money on tickets and accommodations to buy products that could be available at the border with an import mechanism simple to imagine, also with the weakness of acquiring products difficult to repair or having the common guarantees for consumer protection.

It is a positive move that the new government of President Díaz-Canel has taken note of these realities, even though it has done so rather late, and that it proclaims and implements measures to channel that flow of foreign currencies to make less difficult the life of the country’s citizens. It is encouraging that the ministers who spoke at the Mesa Redonda did so far or from a certain distance with the preference for control that has characterized the Communist Party’s management of the economy for several decades.

Instead of emphasizing the control and prohibition of imports, which were legal and went on to the informal market as a result of the inconsistency of government policies, the ministers seemed to understand that what was happening was to be expected in the face of decision-making opportunities and obtaining profits due to the very defects of the centralist model and the dynamics of incomplete reform.

That part of Cuban consumers that can travel and import individually, has means to escape from the yoke of the monopolies and abuses of the currency collection stores. It is a ray of hope, for those who want to have it, that the Cuban authorities present as a merit their aim of reacting to the problem posed with non-prohibitive reasons but creating options that compete in border with the import mechanisms that popular knowledge had created.

Those who want to travel to Panama to buy their air conditioner can continue to do so. The government is not going to decree against that nor is it going to give a lecture about the flight of foreign currency. It aims to react economically to create incentives and options to place within its borders alternatives to the existing nonsense. By the way, consumers can gain from services for the products they buy, such as repairs and guarantees, provided by Cuban workers.

About the potential of what was announced

From the perspective of the emerging private and cooperative sector, or even from autonomies of the state sector and the new prerogatives of the administrators, the measures adopted pose important potential import opportunities.

Those actors capable of acquiring or raising foreign currency, either with their own resources, or as a loan or joint investment, could access an external wholesale market not only for consumer goods, but as a park to reactivate important economic activities. Among these, private transportation stands out, now with less complicated access to spare parts, but it can reach more.

If based on a mixed economy there is a significant unblocking of the bottleneck that is the import restriction, it is feasible that new dynamics encourage not only new productions and the supply of services, but also greater competition among economic actors. Such competition would point not only to the most efficient actors but to those structures that hinder them.

At the level of small and medium enterprises, there are investments in equipment and technology that are impossible to think of based on a traveler’s individual import, but which can determine the improvement and even the viability of an enterprise. An issue as important as the transportation or refrigeration of agricultural products on time, or even with a view to the future, a tractor or a mill, may depend on the availability of a piece of equipment or a part. Something as important as the market of administrators is clarified when faced with a possibility like this of importing, their skills are tested not to flatter an official, but to raise the necessary funds to acquire a new and adequate technology.

All of the above is potential, and the devil is in the details of the implementation of what has been proclaimed.

The adoption of these reforms will give policy makers new problems that will test the new, less prohibitive and controlling mentality that the authorities have now exhibited.

I can’t imagine a more probable scenario than the dismantling of ideological barriers or the bureaucratic obstacles of the dynamics of partial reform. That said, it is never enough to call attention to the potential that is lost due to conservatism, ideological rigidity and the defense of privileges that doesn’t put as the highest goal the development of the country.

Despite the merits of what has been announced, it is the beginning of urgent changes and barely the unblocking of an import restriction present in a marginal area of ​​consumption. It will only reach its productive potential if it is implemented with a broad sense of mixed economy, if it is accompanied by important complementary measures and the essential incentives to generate a greater domestic production substitution and export capacity.

Everything presented at the Mesa Redonda is superficial if the skeptical and prohibitive structures and attitudes towards the private and cooperative sector remain and a policy of promoting competitiveness in small and medium enterprises is not designed, and new resources are not channeled towards the production of food that the country imports even though it can be produced locally.

Between droughts, climate change, outbreaks of swine fever and other factors, there are important upward trends in food prices in 2019, with important implications for the country’s food security.

The government now has important opportunities for financing and making profits from the new options it has created, maintaining monopoly structures for consignment imports. It should try to do it in the friendliest conditions to the market as possible as it would be operating with a fund that the importer provides for a service. It is a possible mutual gain and greater integration between the state and the private, but also a challenge in which the government’s credibility and commitment is at stake.

Thinking about the import prices of these products without the type of predatory charge that characterizes the practice of the TRDs is an incentive. That said, the challenge is not only located at the price level, but in the quality of the importing service, the fulfillment of the contract conditions, the competition between entities to satisfy the orders that are resolved today by traveling to Panama, Mexico or even Russia.

A structural problem lies in the optimal use of remittances and the conception of the mechanism itself. Is it conceived as an import for investment or for the consumption of that part of the population with higher incomes because they have relatives abroad?

If it is a mitigated mechanism for the abuse of currency collection stores mainly associated with consumption, the country will be reinforced in an unsustainable path of statism with walled pockets of incomplete markets. But if it is a question of learning from East-Asian experiences, the emphasis should be placed on prioritizing the import of equipment for the industrialization at the available scale, of small, medium or large enterprises.

The idea is to think not only of the reforms necessary to import, but those that allow the creation of an industry and agriculture capable of taking advantage of domestic productive chains, to supply tourism for example, and exporting. In that sense, the proclaimed measures and new mentalities are not a substitute for the necessary and urgent adoption of structural changes, such as monetary unification and the adoption of a realistic and inclined exchange rate towards what can be exported, as patiently discussed as unduly dilated.

There is also a cost in a growing poverty and inequality within the country due to the continuing dynamics of partial reform, in which those best positioned by power or simply receiving foreign currency in the form of remittances take the lion’s share. David does not have Goliath’s time, and the juxtaposition of income and wealth gaps with the marked inequalities in the Cuban population create important gaps and distances between the rhetoric of a political regime that originated in promises of equality and highly differentiating realities.

Last but not least, the government, which mentioned the harassment of the Trump administration to remittances, should consider measures towards emigration that project Cuba not only as a country of origin but also as an economic opportunity to connect with the markets where the emigrants reside.

There are logical suspicions and distrust regarding the Communist Party’s respect for private property and national investments. It is hoped that an investment climate in which emigrants can participate not only as repatriated self-employed, but as entrepreneurs or protected entities of the countries where they live, encourages them to bring more foreign currencies to Cuba.

It is true that today the biggest obstacle to sending a larger volume of remittances is the limitations established by the Trump administration. However, if Cuba encourages investment and participation of Cubans residing in third countries, the Cuban community in the United States will have to become aware of lost opportunities.

If the market sends the right signals, we will see many in Miami looking for ways to change U.S. laws or investing in Cuba through figureheads, to participate in the economic reanimation. When the Obama administration opened those appetites, many supposedly intransigents were called to chapter due to money. In addition, we must mention the hundreds of thousands of Cubans who do not reside in the United States, and whose opportunities would also be expanded.

These dynamics, such as those of family trips in which voters who defend the travel ban forcefully vote against it, would contribute to making the embargo/blockade irrelevant, both morally and, more importantly, economically.