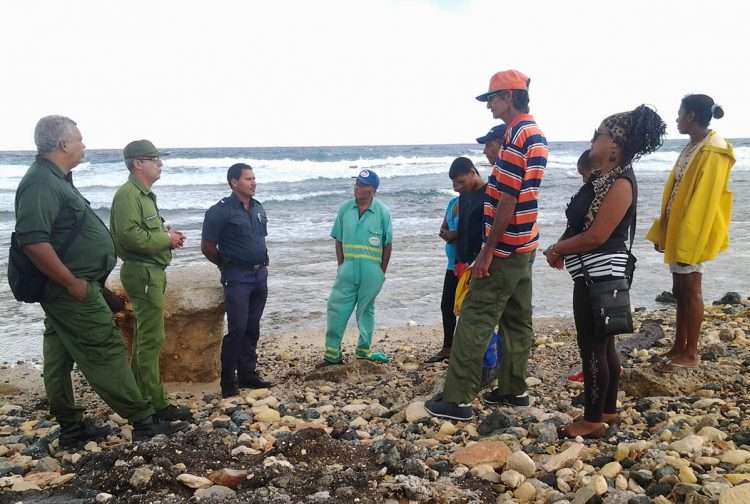 Members of a Mirando al mar detachment and Cuban soldiers, who work together to detect drug shipments on Cuban coasts. Photo: lacalle.cu/Archive.

A total of 295 drug shipments arrived along the Cuban coast in 2021, a figure that far exceeds the previous year’s 153, according to the island’s official media.

Data provided by the Ministry of the Interior (MININT), which appeared in a note in the official newspaper Granma, show that, as a result of this increase, 2,338.64 kilograms (kg) of drugs were seized during the period, mostly of consignments of marijuana.

The increase was influenced by the “complex network of international drug trafficking in the region and its incidence in the Caribbean, as well as the existence of routes close to Cuban territory and the arrival of packages dragged by sea currents, which represents a potential danger for the articulation of internal traffic,” according to the media.

Regarding the events related to the air borders, it indicates that at Havana’s José Martí international Airport, 21 international drug trafficking operations were neutralized, in which 67.59 kg of these substances were seized and 41 people were detained, between foreigners and nationals.

In the internal confrontation, the authorities reported that 97 crops were discovered in 2021, in which 32,868 plants and 48,521 seeds were seized. Likewise, 121 trafficking events were neutralized, in which 165.63 kilograms of drugs were seized, according to the same report.

The MININT authorities consider that 2021 saw “the persistence and intentionality of Cuban émigrés and foreigners to organize drug operations, with the support of Cuban citizens, for which they rearranged and diversified their actions, using unaccompanied cargo, postal shipments and the use of speedboats.”

The Cuban forces specialized in the subject managed to dismantle a criminal network organized by Cubans from Mexico, with a support base in Panama, Costa Rica and Cuba, with the intention of introducing marijuana, cocaine and methamphetamines, with the use of passengers, cargo and speedboats in combined human and drug trafficking operations. As a result of this operation, 26 individuals were arrested, 303.37 kg of drugs were seized, and a speedboat was seized.

Also, the report continues, two other naval means linked to combined human and drug trafficking operations directed for Cuba, from Mexico, the United States and Jamaica, were neutralized and occupied, and significant volumes of marijuana and synthetic cannabinoids were seized, according to Granma.

Likewise, two other speedboats with six Bahamian crew members on board were seized, from whom 1,291.82 kg of marijuana were seized, and which were linked to operations not directed for Cuba.