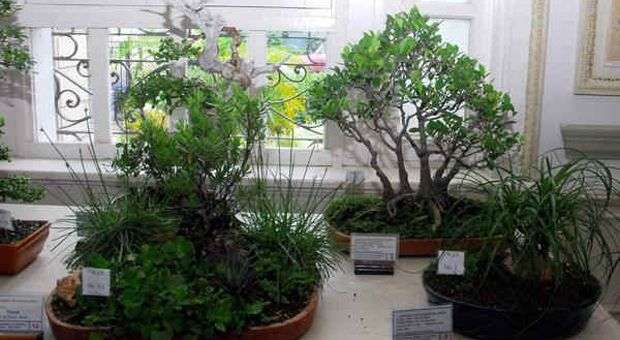 Having a júcaros, cherry and ebony forest on a balcony or on a roof of a Cuban home may seem like a crazy fantasy, but a wealthy collector visiting the Fourth Biennial of the Bonsai Havana group could buy his own botanical garden.

Bonsai are not ordinary houseplants. They are living ornaments very different from those commonly grow on the outside of houses or on patios. These plants require extra effort and care in cultivation, they are modified to remain dwarfed, and require constant treatment throughout their life. Therefore they have luxury prices.

Professor Jorge Guerra, president of Bonsai Havana, says that the sale of these small trees cannot be yet a stable business in Cuba, as there is no domestic demand and the existing domestic market is very small. Guerra itself only sells two or three pieces a year.

These trees are not cheap, at least for the purchasing power of the average Cuban. Like any sophisticated craftsmanship, the price of a bonsai is determined by supply and demand. The minimum price is 25 pesos convertibles, when it comes to the lowest category. The regular value of a piece can be bargained, sometimes even hundreds of CUC down: the amount payable is determined by the quality of the piece and the experience of a grower.

In Cuba, the most popular species among the few bonsai buyers are the coastal llana, cherry and Chinese lemon tree. Any reason?  For their appearance. The particularly distinction that makes them commercially attractive are they flowers: people want small trees that occasionally blossom.

The sale of bonsai is only the first part of a long-term service. A bonsai is an ornament that is never finished. Unlike other domestic plants, these trees require regular care to maintain its diminutive size and existence. The bonsai lives in a pot to which, for example, you must change its substrates to renew the nutrients from the soil in which it is planted.

Havana Bonsai Group has established a policy of customer service: every buyer should have the bonsai grower contacts, so that in the future he will perform the after sales services required. The marketing of these trees has its own ethics: a practitioner cannot treat plants of other specialist unless he has his permission.

In Cuba, the bonsai acquire a unique property. Due to weather conditions typical of the tropics, its growth rate is accelerated, very fast compared to other countries. In Japan, the original site of the technique to create these trees, a cultivator needs at least five years to complete one, but in Cuba it takes about twelve months.

Havana Bonsai Group, founded in 2002 by the Third Year of Initiation imparted by the expert Jorge Guerra, conducted between August 21 and 25, 2013 its Fourth Biennial. Its members are planning for the future events in their registered office, the National Museum of Decorative Arts, located at the corner of 17th and E, in Vedado.

In addition to the Expo selling, the Group teaches introductory courses in the art of bonsai to those interested in learning how to transform a normal plant in a dwarf tree.

Although it doesn’t have fate of the typical art tourists seek in fairs in Havana, Cuba bonsai have nature on their side, and the faith of their growers.