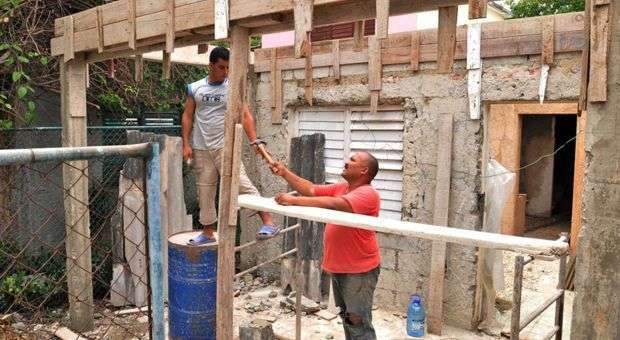 Building or repairing a home is one the most common concerns in Cuba today. A Cuban needs at least 80 000 pesos (about 3,700 USD) to build a house with basic facilities, according to the Ministry of Construction.

Much of that amount is used to buy cement, a product available in two types in the retail network: the PP 250 and P 350. The first is cheaper, but it needs more water to cure and is usually less resistant, therefore people avoid using it on plates, columns and other structural elements.

A recent announcement could change that.

“Wetting cement better with less water has been the purpose of scientists from several decades and for that they developed chemical additives that give fluidity to the mix without needing more liquid,” Doctor of Science OnCuba José Fernando Martirena , Center for Research and Development of Structures and Materials (CIDEM by its Spanish acronym), in Villa Clara, explains.

“But the chemical additives are very expensive and we are developing a technology that achieves similar properties at a much lower cost. It is by using Efficient Microorganisms (or EM) as a kind of diluents “he reveals.

The EMs are mixtures of bacteria, fungi and yeasts that have demonstrated effectiveness in increasing agricultural yields, reduce water pollution and to eliminate odors, but the commitment of the CIDEM is bold.

“We did a test in Cayo Santa Maria and mixed concrete with EM produced in the Finlay Institute in Havana. The results are very encouraging, with the same amount of additives that today are imported at a price between 1 and 5 USD, we obtained similar qualities to a much lower price because we do not use external raw materials in its production, ” Martirena says.

And it seems that it has economic feasibility since for some years this CIDEM line of research answers to marked interest to foreign construction companies involved in building the tourist destination in the northern keys.

Projections speak to market this product in the store network in national currency by late 2014, with the intention of extending the use of cheaper PP-250cement, which coupled to a “natural additive” could be used in the manufacture of house concrete roofs. “This could be happening in the second half of 2014,” the researcher predicts.

Thirty years after its discovery in Japan EMs seem to reach Cuba.

Who says there is a pigsty here?

The Indio Hatuey Experimental Station of Pastures and Forages is more popular in Cuba for their records in low temperatures in winter than for the range of contributions and studies to improve agriculture in the nation. Although scientific flow in there is difficult to quantify.

In Indio Hatuey the first crop of EM were introduced in 2005 to inquire about their value in stimulating agricultural yields. But they have gone further.

“Today we supply the inoculum, or production base, to three large Efficient Microorganisms processors in the country: the Finlay Institute, the LABIOFAM company and the Agricultural group of the Ministry of the Interior (MININT)”, researcher Dairon Blanco, specialist in charge of that line in Indio Hatuey reveals to OnCuba

“With the MININT we exploit the ability of these crops to reduce the stench in hog rising centers and counteract diarrhea the pigs suffer due to the same environment in which they are raised,” he says.

“We fumigate with a EM solution the excreta of animals and the bad odors disappear. In addition, we incorporate it into the food and got more meat gain. We found that a pig eat our microorganisms will weigh four to six kilograms more than one that does not, in the same period of time, ” Dairon explains.

He adds: “We managed to stop cleaning the pens every day to do it twice a week. That means saving 1 million liters of water per thousand pigs “.

Apparently, the research center makes good profits from this EMs.

“The station registered the trademark IH Plus, a solution adapted to the resources available in Cuba. We have 180 “plants” associated throughout the country, or what is the same, 180 places where they grow their own MS from our inoculum “Blanco abounds.

However, the economic feasibility of this solution has not been exploited to their full capacity by these recurring contradictions within the productive network of the country.

“We developed the cultivation at a dilution of molasses, made in all the sugar mills in the country, but do not think it’s so easy to get,” Dairon complains.

It is contradictory, but true. People who know the process argue that due to the low levels of sugar production in recent years, the mills prioritize getting the two most profitable derivatives from cane and allocate all molasses possible to grain crystallization or distillation of alcohol ; detrimental to deliver intermediate molasses for other purposes.

“The second problem is the plastic tanks for fermentation,” Dairon adds, who says that it is little domestic manufacturing of such containers, same as those used for the storage of water in homes, and notably “lost” in the governmental network.

“The stench of the river is eaten by these bugs”

The beauty of the city of Cienfuegos is praised throughout Cuba, but is tarnished when the traveler passes through its entrance from Havana and Santa Clara and is received by a nasty rotten egg smell.

It is hydrogen sulfide emanating from the El Ingles stream that flows into the bay dragging factory waste derived from corn, popularly known as “glucose”, and officially called GYDEMA.

The absence of an effective system of waste treatment for years has caused odors to flow into neighboring residential areas, whose residents do not cease to cry out for a solution for such a problem. In recent days local media reflected a factory experiment, whereby EM cultures were added to the waste.

“Microorganisms have been very efficient in water clarification and we have shed the least amount of organic load to the Bay” Rosario Cabrera, Technical Head at Gydema, told OnCuba. “In the days of trial we corroborated that the acidity of the residual liquid went down, the odor disappeared and the water was not turbid” she confirms.

In Gydema they now seek the optimum amount of EMs required for their waste, as the experiment was “quite expensive”, Rosario confesses. “We have a generation rate of 53 cubic meters of waste per hour and the addition of EM was one liter per cubic meter. Each liter cost us five pesos and 37 cents in CUC, so that in one hour we spent 280 pesos and almost 20 CUC. “

Juan Gonzalez Correa has grown rice on the banks of the El Ingles for over 20 years and lives in a neighborhood adjacent to the factory. “The other day on TV I heard about the experiment and found that the stench actually dropped for a time. It seems that these bugs ate it, “he says during a break from his work.

The increase of oil transportation next to our coasts keeps alive the concerns about a spill, with devastating consequences for ecosystems. Traditional methods of collecting hydrocarbons usually are up to 60 percent effective, but the other 40 percent that remains is enough to kill birds, fish and marine and coastal flora.

In recent years scientists use microorganisms obtained from the sea itself as a cleaning treatment. It has been called “Bioremediation” and has in Cuba several exponents, as scientists at the Center of Marine Bioproducts (Cebimar) and the Center for Environmental Studies of Cienfuegos (CEAC).

According to Jelvys Bermudez, environmental engineering specialist at CEAC, one of the sources of income of the entity is applying Bioremediation treatments in areas where spills have occurred. “We use a registered by Cebimar product that has given us many benefits: Bioil-FC”.

According to an article published by the Electronic Journal of the Environment Agency, “Bioil-FC is a byproduct obtained from five marine bacteria which has been used in oil spills occurred in Cuba both in bays as on beaches.” In all cases, the article says, the removal was over 90% in 30 days.

In Cienfuegos, Jelvys can illustrate this with a recent treatment on an area known as Punta de Mahoe, where they cleared the remains of four waste oil tanks. “Here we remove the 98 percent of the fuel expanded upon the soil from the old storage tanks, and vegetation grew back,” he says.

Although he doesn’t talk about costs, the value of their services is much less than that provided by similar foreign entities, and even constitutes an export product. According to these scientists potentials are still unfinished since they need to investigate applications of over 400 strains of bacteria isolated from the marine environment which CEBIMAR has, many of which are capable of degrading oil.

On the coasts, the waste treatment plants, the pigsties or in housing roof, efficient microorganisms reveal they are a very profitable business. It is up to scientists to find a way to make profits from these microscopic beings.