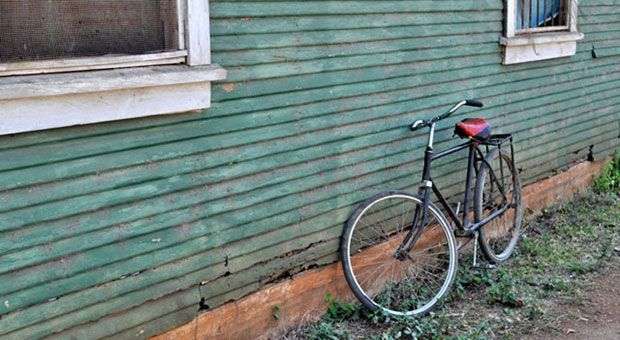 A picture like that’s nearly impossible to get in Havana. Everyone here cares for his bike as if it were worth their weight in gold. But in the countryside life is more sedated, and there are still people who leave their belongings at everybody’s reach, with the confidence that no one will come to steal them.

This photo was taken on Cunagua, a sugar mill town(a town that lost is mill) in the central province of Ciego de Avila. What you see is not a yard; next to this wall you find the street already. Everyone goes through there, but there was no one watching the bike, in fact, the door was locked.

How strange that placidity of small towns! Although, when I come to think of it, that calmness is been lost even in the small towns. Well near Cunagua, in Violeta, my hometown, no one would think at this point to let alone a bike in sight of all.

Thieves have stolen about three bikes from my cousin, almost in front of herface. Times have changed, I will not get tired of repeating it (is sympathetic, because times have been changed since the beginning of time, but some have a tendency to that mourning nostalgia), people have gradually lost innocence, or perhaps it would be better to say that many people have lost their decency.

My father used to say that in the 1950s and 60s people came to the movie theater in Violeta and left the bike outside unlocked, without a guard. Not even one disappeared. Once he a friend of his couldn’t find his and he was surprised: he couldn’t conceive that it had been stolen. And indeed, after some time he remembered he had got there on foot.

I never got a bicycle stolen. And that I’ve always been a bit careless. I have been lucky. I saw more than once stealing scenes in Violeta and Havana. My neighbor on the third floor, back in the village, got his stolen with a breathtaking tranquility. He was on his balcony and an unknown youngster showed up. The bicycle was lying at the entrance of the building.

“How beautiful!” the guy said. My neighbor was proud: “They sent it for me from Germany.” “Can I take a ride?” the other asked candidly. “I do not know you”- my neighbor cried alarmed. “It doesnt matter,” the thief said, and jumped on it and that was the last time my neighbor saw him and the bike. Two hours later my neighbor was still waiting to return. He made the complaint, I think police even made a sketch.

Years later people still joke with him: ” Can I take a ride?”. Much less successful was the offender who wanted to steal the bike from my history teacher in eighth grade, one very old but very energetic lady.

The teacher went for coffee at a friend’s house and left the bike on the sidewalk. The rascal appeared and climbed on it as it were his. But the teacher, who was already out, with an agility that no one could imagine, ran like hell and climbed on the grid, behind the thief.

She struggled a bit and the guy lost his balance. He tried to escape then, but people had noticed what was happening. They took him to the police station. The teacher raised her arms victoriously. Since that day she was nicknamed “the Super granny”.

Cuban medicinal mud on the market