“What we’re saying is that in a period of almost two years we have lost more than 3 billion dollars. The economy has been almost resisting,” explained the head of the island’s economy, who recalled that 2.4 billion stopped coming into Cuba in 2020. 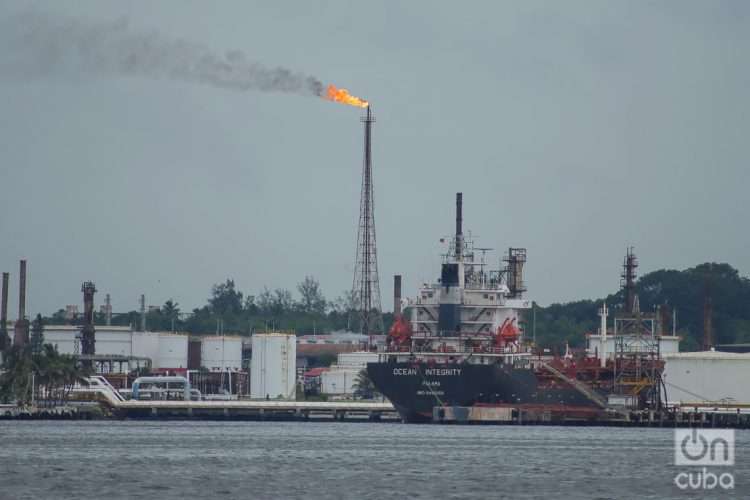 View of an oil tanker in the bay of Havana. Photo: Otmaro Rodríguez/OnCuba Archive.

Cuba’s Gross Domestic Product (GDP) decreased 13% between 2020 and 2021, said this Wednesday Cuban Minister of Economy and Planning Alejandro Gil during the sessions of the National Assembly of People’s Power.

In his presentation, Gil explained that the revenue plan until the end of September was at 60% (about 2 billion dollars), and that the year is expected to end with 700 million below what was planned, according to the report by Cubadebate.

“What we’re saying is that in a period of almost two years we have lost more than 3 billion dollars. The economy has been almost resisting,” explained the head of the Ministry of Economy and Planning (MEP), who recalled that 2.4 billion stopped coming into Cuba in 2020.

The minister also specified that exports amount to around 1.344 billion dollars of goods, which represents 68.7% of the plan, while imports stand at around 5.800 billion dollars, 65% of what was planned.

He affirmed that 1.348 billion dollars have been invested to buy food, a figure far below what is necessary to meet the demand of Cubans, which, however, Gil attributed to “efforts that the country has been making to support, as much as possible, the supply of basic foods for the population.”

The Cuban minister of economy justified the decrease in these imports due to the increase in prices of various products in the international market, such as fuel, which has been above 80 dollars a barrel, in addition to the food itself and freight, which, as he said, have become twice and three times more expensive.

“Financial operations are not always related to physical operations. You can import less food, but it’s more expensive due to transportation,” he added.

On the other hand, Gil pointed out breaches in the sales of two of the main Cuban exportable goods: tobacco, at 91% of the plan, and rum (at 86%), due to problems related to the coronavirus pandemic, which have affected the production of some factories and, in turn, has caused the decrease in international demand for these products.

During his presentation to parliament, the minister of economy affirmed that nickel sales “maintain a good performance,” and its price is above expectations, “but we have not reached the levels of physical production established in the plan,” he clarified.

In addition, he explained that the export of honey and pharmaceutical products show favorable numbers, as well as the income resulting from telecommunications services, although he did not specify figures.

According to the official report, the minister specified that the planning of sales abroad “did not take into account the impacts that COVID-19 would cause.” He exemplified the case of the export of services, which barely reached 67% of the plan, especially due to the significant drop in tourism on the island.

“We had planned to receive 2,000,000 international visitors, which will no longer be possible. We will fall far short. However, the important thing is to take advantage of and recover the industry as quickly as possible,” he said.

Regarding food production in Cuba, Gil described the situation as “very complex” due to the deficit of inputs, fuels, parts and equipment, as well as organizational problems.

He affirmed that there are defaults in almost all lines, such as rice, corn, beans, pork and milk, “with 63 million liters below the forecast, which has made it impossible to support all levels of medical diets.”

He said that, although “it has been possible to ensure the basic food basket, there is a great non-compliance in the national production of eggs, due to effects on the import of corn.”

“We are experiencing disordered international logistics in the world. Right now we have thousands of containers, even paid, of international merchandise that have not been able to reach the country, due to COVID-19 as well as the (U.S.) economic blockade,” he commented.

Regarding power generation, the Cuban deputy prime minister also confirmed delays in “certain maintenance and investments,” and specified that the year is expected to close with some 3 million tons of oil and gas, 90,000 more than what was foreseen in the plan.

“There are several sources that contribute to the generation of energy in the country. The thermal is the one that has generated the most, 55% of the total generation in the country, but in the plan we had foreseen that it would be 60%. Diesel engines represent around 10% and we had planned 5%,” explained the minister.

“When you generate less with thermal and more with diesel, which has to do with imported products, the cost of generation increases. Diesel has been prioritized for electricity generation and this affects the rest of the productions,” he pointed out.

On the other hand, Gil reported that in 2021 the production of cement is not being fulfilled (80% of the plan) and that “the production of steel is greatly affected” (52%), “as a result of the measures we have been taking to reduce energy consumption in those industries.”

In general, the minister of economy specified that there is a supply deficit amounting to 16.5 billion pesos, which is reflected in a commercial circulation of goods and services that at the end of September should have reached 75% of what was planned, “and we are at 67.7%,” he said.

Cuba is going through an economic crisis with serious shortages of basic products and rising inflation, a scenario aggravated by the effects of the pandemic and the U.S. embargo. In this context, the Cuban government has given the green light to a group of measures, including the legalization of MSMEs and greater autonomy for state-owned enterprises, in search of boosting national production, although in the opinion of experts more measures and transformations in this direction are necessary.