In the opinion of experts consulted by EFE news agency, the recovery of the island’s national currency in recent weeks has been only an ephemeral change that has little to do with the performance of the economy as a whole. 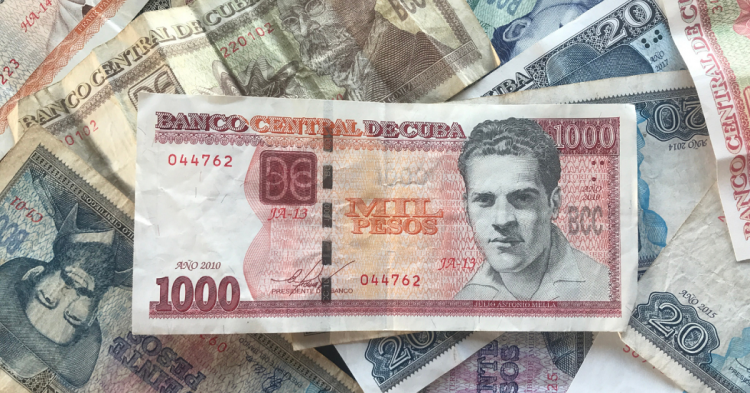 For more than two weeks in a row,  this Wednesday the Cuban peso has gone up in the informal market after Washington’s announcement that it would eliminate the limits on remittances, something unprecedented in 18 months but that does not necessarily anticipate a recovery in the country’s economy, warned three economists to EFE news agency.

Almost like a mirror, the exchange rate of the Cuban peso (CUP) with the dollar that is bought in the street ― the official rate is 24 to 1 ― importantly descended 48 hours after the May 16 announcement by the administration of Joe Biden.

This change in the graph also coincided with the May 14 announcement by Minister of Economy and Planning Alejandro Gil Fernández that the Cuban State would sell dollars, or freely convertible currency (FCC) above the official exchange to “national and non-state national suppliers” with certain conditions.

The purchase went from the 115 CUP per dollar on May 17 to 95 on May 23, an equivalence that was not seen since January, according to data calculated by the independent media El Toque, which prepares a daily rate taken as reference by experts.

This Wednesday the exchange rate for a dollar was 98 CUP in the informal market, with a more stable behavior, according to this indicator made with the average of hundreds of foreign currency buying and selling ads on Cuban digital platforms.

The trend is significant. The dollar had been progressively appreciated since its official exchange was unified as 24 to 1 in January 2021, as part of a broad and controversial economic reform called Reorganization Task.

Cuban economist Pedro Monreal recently calculated that the balance rate of the exchange rate ― an estimate based on macroeconomic variables ― would be this year in the 82 CUP per dollar, as he explained in his blog El Estado como tal. The background is the persistent crisis that affects Cuba, the result of the combination of pandemic, U.S. sanctions and failures in national economic policy.

This appreciation of the Cuban currency has only been an ephemeral change that has little to do with the performance of the economy as a whole, experts clarified.

“In the short term, yes, (the peso) can go up or down based on any statement made by Biden,” Cuban economist Elías Amor pointed out to EFE.

Cuban Pavel Alejandro Vidal, an associated professor at the Javeriana University of Cali (Colombia), agreed with Amor: “Things are so bad that any news about any dollar that can enter is a respite for the economy.”

Analysts emphasize that the appreciation of the CUP responds to the “expectations” that were generated in an avid foreign currency market.

Cuba temporarily suspended dollar bank deposits in cash in June 2021 because of “obstacles” related to the U.S. embargo, but the banks ― state-owned ― have continued to accept other currencies such as euros, pounds sterling, Canadian dollars or Japanese yen.

The economists specified that the underlying problem with the Cuban peso is that it does not have a real value ― because of the big difference between the official exchange rate and that of the street ― and that the Reorganization Task has done little to help with its mixed results.

These measures devalued the peso and led the country to a kind of partial dollarization in their attempt to unify exchange rates.

For Pavel Vidal, it was “a monetary reform at the worst possible time,” under the influence of the COVID-19 crisis and the strengthening of U.S. sanctions against Cuba approved by the Donald Trump administration (2017 -2021).

Economist Tamarys Lien Bahamonde added to these factors that, more than a year after the Reorganization Task, there is a great deal of Cuban pesos in circulation, but not of dollars.

“The only thing that the exchange rate (informal) is reflecting is that there is a shortage of foreign currency in Cuba,” she said.

Amor went further and explained that CUP oversupply is because the government has tried to balance its deficit ― which he estimates at around 18% of the gross domestic product (GDP) ― with national currency.

Unlike Amor, Vidal pointed out that changes in the U.S. policy towards the island and the gradual reopening of tourism ― a key sector for Cuba in terms of contribution to the GDP and currency income ― can be reflected in a recovery effect for the national economy, but “without being the boom.”

Bahamonde, on her part, indicated that, although it is still early to predict a change in the economy, it seems that “the (Cuban) market is beginning to recover its level.”

The Cuban government perceives a “gradual recovery” of its economy and considers that the GDP could advance this year 4%, after the 13% contraction of the two previous fiscal years.