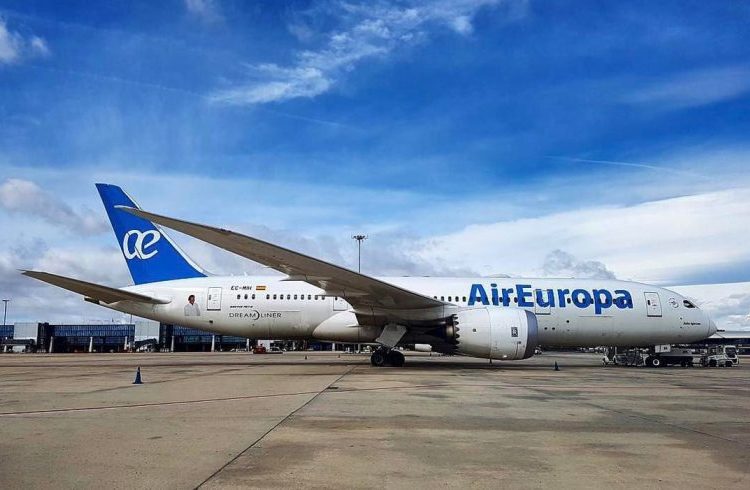 Air Europa’s most modern airplane, a Boeing 787 Dreamliner, landed for the first time in Cuban capital on the night of Wednesday, March 8. The Dreamliner will cover the Madrid-Havana route, which will maintain its daily frequency but with the advantages of the new aircraft, one of the world’s most economic and comfortable.

With capacity for 296 passengers – 274 in tourist class and 22 in executive class – this Boeing 787 is the sixth of its type to be incorporated into the company’s fleet, according to what Francisco Pérez, regional director for the Caribbean of the Globalia tourist group and who arrived in Havana for the inaugural flight, told OnCuba.

Pérez explained the advantages of the new model, which makes it possible to save 20 percent in fuel, eliminates 60 percent of noise and is less contaminating, issuing less CO2 into the atmosphere than other aircraft. “This is an incredible technological leap. It’s the first time that such an advanced airplane has arrived in Cuba and it will continue flying daily from Madrid,” he said.

However, Pérez specified there will be no change in the price of the tickets, even though the new airplane guarantees 8 percent more oxygen in the cabin, is more comfortable and each trip takes less time.

“Our airplanes normally take around 9 hours on the flight between Havana and Madrid, and vice versa; but now, with the Boeing 787 Dreamliner, the flights take one hour less, which is saying a lot because we’re talking of being one hour less in the air.

“This Boeing represents the latest in technology in the aeronautics industry; it’s the most modern model. We have 22 aircraft of this type and only 6 have been incorporated as regular flights,” the entrepreneur commented.

The airline incorporated the last two airplanes of this model in December 2016 and since last January 10 they have been operating the Madrid-Buenos Aires route. The rest of Air Europa’s Boeing 787 Dreamliners have destinations like the cities of Miami, Bogotá, Santo Domingo and starting now Havana.

Initially called Air España S.A., the current Air Europa airline emerged in 1984 and made its first flight on November 21, 1986. In 2005 it became the second European airline company – only surpassed by the Scandinavian SAS – in using in its operations the then new technique of controller pilot data link (CPDLC), which replaces the voice messages for text messages.

Moreover, Air Europa has a category A Air Operator certificate issued by the State Agency for Air Safety, and belongs to the Globalia Corporación Empresarial S.A., the largest Spanish tourist group owner of Halcón Viajes and Viajes Ecuador, Travelpan and the Be Live hotel chain. In Cuba, the group has some 900 hotel rooms and, according to Pérez, since a short time ago it has been managing the Copacabana Hotel.

According to a Cuban Institute of Civil Aeronautics and Ministry of Tourism press release, “the incorporation of this new aircraft is an important event not just for aviation but also for Cuban tourism.” Spain continues among the principal tourism markets for Cuba, with a total of 153,340 visitors in 2016, which represents a 42 percent growth compared to the previous period.