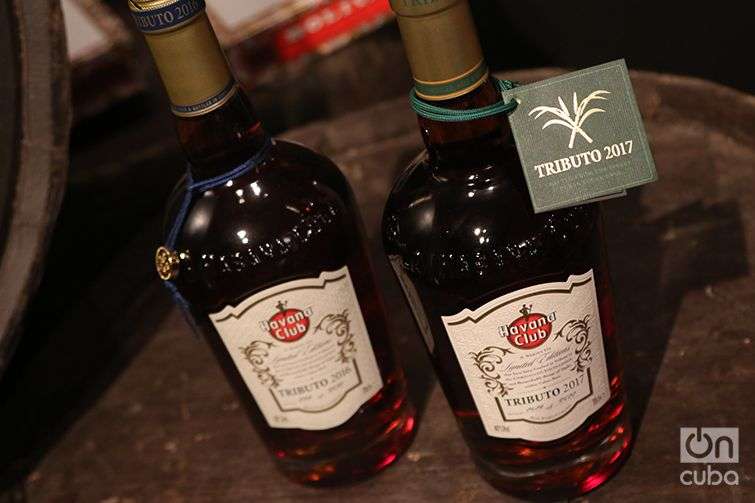 Barely 2,500 bottles of Tributo 2017, Havana Club’s new rum of its iconic collection, will be marketed in the world, each one numbered as a collection piece.

Sixteen countries will be the fortunate ones to serve as market for this orangish amber jewel, with an intense flavor and a predominately dry taste in the mouth, presented last Tuesday in Havana.

This spirit forms part of the Tributo collection released in 2016 by the Havana Club International S.A. company. Its aim is to pay tribute to a deeply rooted tradition of the knowledgeable maestros of Cuban rum and declared a Cultural Heritage of the Nation.

Like its predecessor, Tributo 2017 is the result of a complex process of mixtures and natural aging in the cellars and barrels of Havana Club, especially in the San José rum company. But compared to the 2016 rum, which had a touch of dry tropical fruits, this one has the intensity of spirit made from sugarcane, the base of all the rum company’s products.

It is to this base that Tributo 2017 pays its tribute. It contains touches of more than 30-year-old spirits from when they were first distilled. That is why the distinctive color of its design is green, the color of sugarcane. Rum maestro Asbel Morales, whose signature appears on the bottle, insists that this is not the work of a single man but rather the fruit of a legacy passed from generation to generation.

“It’s not about a hand-written recipe,” Morales explains, “but rather about an aroma, a flavor and a tradition, That’s where the secret lies: in aging and mixing a spirit with personality, which identifies the Havana Club rum; in the painstaking work that makes it possible to find a unique, exceptional smell and tasting, and for whose making one must take into account many factors: the bases, the cellars, the barrels, the temperature, the humidity, the time of the year….”

At the presentation of the spirit in the Rum Museum, as part of the 2017 Habano Festival, Asbel Morales emphasized on the sensorial attributes that in his opinion distinguish the second delivery of Havana Club Tributo.

He spoke about its deep amber color, brilliant and at the same time transparent, which makes it possible to see through the receptacle in which it is served. Its aromatic capacity that highlights the touches of sugarcane molasses transport whoever drinks it to the very moment when the sugarcane was cut.

As to the flavor of Tributo 2017, the rum maestro celebrated the balance of experiences led by the very aged spirit, with which classic touches of chocolate, tobacco and coffee are combined. Despite its strength and dryness, he pointed out that it is not aggressive but rather goes down softly and prolongs its sensation in the mouth like all authentic Havana Club rums.

Morales suggested drinking it alone or adding a small ice cube, and recommended its combination with a good Habano – a Montecristo or a Giant Bolívar Corona – to explore the sensations born from the sensorial cigar and rum combination.

At a cost of 350 CUC, Tributo 2017 is already being marketed in Cuba in liquor stores, Habano houses and duty free shops. Outside the island, consumers from countries like Germany, United Kingdom, Italy, Mexico and China will have access to a product conceived for connoisseurs and collectors.

However, for Havana Club International S.A., a corporation that exports its products to more than 120 countries through the French Pernod Ricard Company, Tributo’s principal value is not commercial.

“What we are seeking with this collection are not production volumes and profits,” said Jérome Cottin-Bizonne, general director of the French company, “but rather raising the level of the rum as a product. We want to change people’s perception that rum is just a drink for parties, to demonstrate that it is as noble as the other aged spirits.

“Each product of the iconic collection has its own history, and as part of it Tributo holds a special place because it aims to show the wealth and versatility of Cuban rum and of our Havana Club cellars in particular, to teach the world that our rum can be extremely fine, with a great cultural value. That’s why its editions are limited, because we want connoisseurs of aged spirits to add this new authentic Cuban rum to their collection.”

The continuation of Havana Club Tributo rests on that will. “We’re going to continue,” rum maestro Asbel Morales confirms. “Our cellars and maestros still have much to offer. In 2018 we will surely have another edition that dignifies Cuba’s rum tradition, demonstrating its exceptionality throughout the world.”