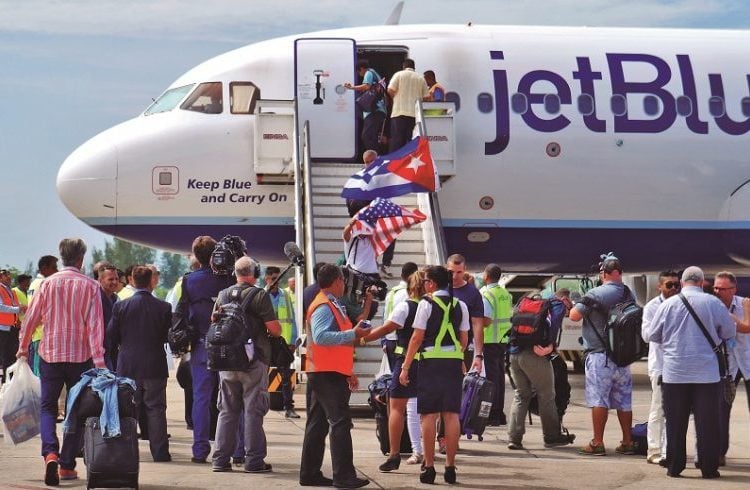 Direct flights between the United States and Cuba are already a reality. An Airbus A320 coming from the United States broke more than half a century of silence in the sky. It did it on the Fort Lauderdale-Santa Clara commercial route. Some 150 persons came down from the aircraft in the center of Cuba on August 31 of this year.

JetBlue, a consortium already established in the history of relations between both countries, was in charge of the first trip. Ever since the memorable 17D, the prohibitions have been gradually thawing.

Regarding the event, Barack Obama recognized that important steps had been taken with the reestablishment of diplomatic relations and opening of embassies, facilitating the increase of trips and commerce, connecting more U.S. and Cuban people, as well as promoting the free flow of information to, from and inside Cuba.

He concluded by saying that advances have been made regarding common interests and joint work in complex issues that for years defined and divided the two countries.

A year later, the president added that the normalization would be a long trip, but that the last 12 months were an example of the progress that can be achieved when outlining the roadmap toward a better future. He said that on the following year they would continue this road, empowering the Cuban and U.S. people to lead the course. While the principal obstacle for the normalization continues existing, there are many facts that speak of a new relationship.

U.S. Secretary of Transportation Anthony Foxx and Assistant Secretary of State for Economic and Business Affairs Charles H. Rivkin traveled to Havana last February to sign a bilateral agreement on air services between the United States and Cuba.

The agreement allows for 110 daily regular commercial flights, including 20 to Havana and 10 to nine international airports in Cuba. The regulation does not limit the charter flights operating since the 1970s.

Although the U.S. law still forbids citizens from that country to travel to Cuba for tourism, this agreement, in the context of the 12 authorized categories, facilitates the “authorized trips” and opens the way for a flood of offers.

During the approval process, the campaign of some Republican Party sectors, who argued that the safety of Cuban airports did not meet international standards or U.S. requirements, put a spoke in the wheel.

Regarding this issue, Cuban Foreign Minister Bruno Rodríguez pointed out during Foxx’s second visit to the island that “Cuban airports have been preparing systematically since recent years to attend to the arrival of tourists to Cuba and these regular flights are part of the usual functioning of Cuban terminals.”

Which airlines are flying and where to?

Regular flights will connect with the capital and other Cuban cities from the U.S. cities of Atlanta, Charlotte, Fort Lauderdale, Houston, Los Angeles, Miami, Newark, New York, Orlando and Tampa.

Barely one day after JetBlue’s first flight, on September 1 Silver Airways made its debut with a regular line also to Santa Clara; American Airlines operates two daily flights between Miami and Holguín, Santa Clara and Varadero, and one a day connecting Miami with Camagüey and with Cienfuegos, for a total of 56 weekly flights, more than any other U.S. airline flying to Cuba. The service to Havana begins in November, with 35 flights a week.

Other U.S. airlines will continue their incorporation in the next months, having as destinations different Cuban cities, including Havana.