If we have allowed garage sales that are generally not garage sales, why then do we not encourage the emergence of private businesses for full-fledged retail sales? 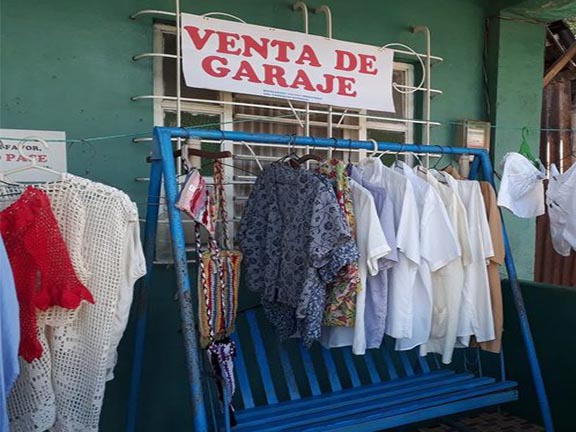 It does not matter if the floor is concrete or covered in earth, or is simply filled. The truth is that the garage floor seems like fertile ground for the seed of entrepreneurship to germinate and grow. It is also true that not everyone has a garage.

They say that Walt Disney’s first studio was in a garage in Hollywood. Also that, in 1938, William Hewlett and David Packard launched from a garage, and after much experimentation, their company. There are other legends out there like Apple, Google or Amazon, where the garage appears as the “germinator” of those big and successful businesses.

There are even those who have taken the “garage syndrome” to the extreme and think that if an idea is born and begins to germinate inside a garage, more than 50% of its success is guaranteed just because it was born there.

Of course, a garage is not the same in one context/regulatory framework/local economy as it is in another. But in any case, one’s own garage, the intimate place where one “isolates” oneself from strange noises, where one can concentrate and rehearse over and over again until without disturbing other people, for which one also doesn’t have to pay anything, it is an ideal place for that process of creation that can lead to a new venture and perhaps later even to a world-famous company, if and only if the business environment is sufficiently “friendly” and “propitious.”

Here in our archipelago, houses with garages are not so common, so perhaps we should incorporate patios and rooftops into that microspace. Ideas have also germinated there that have become enterprises and even businesses. Of course, in our country, the fertility of the soil in the garage, on the roof terrace has to be very high, because the business environment, that necessary climate for businesses to germinate and grow, for a long time was extremely aggressive. Today there is evidence that it has been improving, although the same evidence also tells us that there is still a long way to go.

But those garages that have become famous are far from those others, typical in a group of middle- and high-income countries, which are used from time to time by their owners to sell those goods that they no longer use or that no longer serve them. These sales are frequently made by the children and young people of the house itself, to save that money for their vacations or other purposes.

Obviously, that is not the reason or the purpose of what is practiced today in our cities and towns under the name of garage sales, although it is almost better to call them portal sales, or room sales, or door jamb sales. In general, used objects are not what is sold, much less what is offered in a good part of those sales comes from him or from his home, the income he receives and often his ability to sell is not marginal for the seller nor what he and his family need to be able to acquire goods depends on those sales. In our country, the garage is associated more with survival than entrepreneurship.

The so-called garage sales came to Cuba to stay, however, it happens that unlike their original idea in those countries where they arose, here they have become, by virtue of all those factors that are well known, a stable and income-earning system.

They are here to stay despite the fact that the resolution that approves it as a retail trade modality describes them as temporary. The moment they were allowed, July 2021, largely explains the reasons for their approval. Due to the reality we live in, it can be affirmed that the eventuality will last for a period of a few years.

That a considerable group of people can obtain some income with relative stability through a lawful activity is, in the conditions of our economy and our society, something that, without a doubt, is very good. The other side of that coin is that this way of being employed and the income obtained turn out to be, in macroeconomic terms, one of the least efficient and desirable in the development aspirations of a country. It is also true that to develop first you have to be alive.

For that 2020, the employed were 4,643,800 people, the unemployed2 were 66,200 people and the unemployment rate was only 1.4%, an extraordinarily low rate if we take into account that in 2020 the Cuban economy far from growing, decreased.

The other reading has to do with the comparison between the number of unemployed and the difference between the population of working age and the active population, around 2,386,000 people. If we assume that between one million and one and a half million people between the ages of 17 and 23 are studying, then there are still around 800,000 people who are not employed and are not looking for work, something like 17% of the employed.

Undoubtedly, a part of those who today are “garage salesmen” are in that group of people who have assumed unemployment voluntarily or who are looking for a job that meets their expectations and cannot find it.

My feelings again clash. I live in a neighborhood, with few exceptions I travel on bus and I walk and explore Havana on foot, I have that opportunity. I see the blocks turned into scattered hardware and the faces behind the improvised counter. Then I think about how important garage sales are to those people. But I’m an economist, I’ve been working on development issues for a long time, and, unfortunately, I also realize how far the eventual mode of retail trade is from being the kind of job we need to have, one day, to become a prosperous country and for that prosperity to be sustainable.

It is also true that garage sales are not the problem, they barely manage to be a palliative to the real problem.

The same question keeps coming back to me. If we have allowed garage sales that are generally not garage sales, why then do we not encourage the emergence of private businesses for full-fledged retail sales? How much does the existence of something like this threaten socialism, independence, the security of the country? Isn’t it better to do effectively and efficiently what already exists in a not very effective and inefficient way?

1 The economically active population includes all persons who meet the requirements to be included among employed persons or unemployed persons. It refers to the employed and the unemployed in the period set as the reference for the study.

2 They are people of working age (men from 17 to 64 years old and women from 17 to 59 years old), who did not work in the referred period of the National Occupation Survey (ENO), because they did not have a stable employment relationship, because they had lost it and have taken steps in search of another job or because they were looking for it for the first time. People who do not have a stable employment relationship and have worked at least 8 hours are considered within this indicator.