The MINREX maintains contact with the Panamanian embassy in Havana with the purpose of serving the interests of nationals who travel to third countries through that nation, based on respect “for the sovereign decision of the Panamanian authorities,” PL reported. 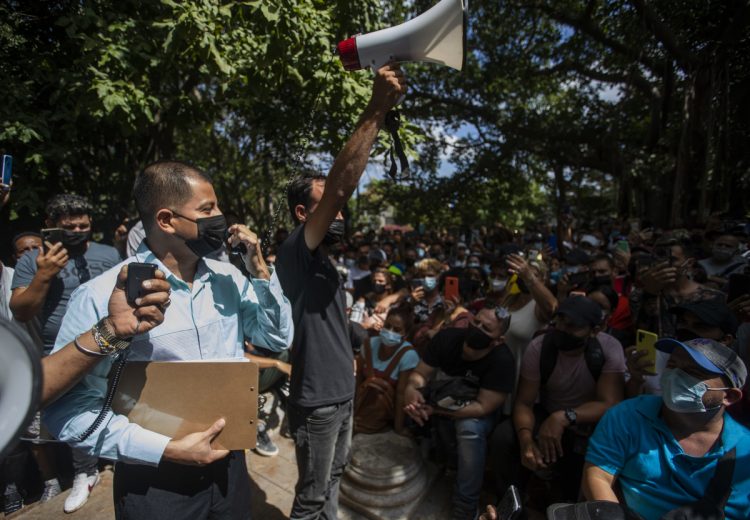 A Panamanian official gives information to hundreds of people waiting to resolve their situation in front of the Embassy of Panama, in Havana, on March 9, 2022. Photo: Yander Zamora/EFE.

The Cuban Foreign Ministry (MINREX) reiterated this Thursday that it is in contact with the Panamanian diplomatic authorities in Havana “with the purpose of serving the interests of nationals who travel to third countries through Panama,” as published by the island’s official media.

Ernesto Soberón, general director of Consular Affairs and Attention to Cubans residing abroad of the Ministry of Foreign Affairs, made this statement, regarding the fact that as of this Wednesday, Panama requires a transit visa for Cuban citizens who intend to use this territory as a stopover, according to a report by the Prensa Latina (PL) news agency.

The measure came into force last Tuesday (5). The visa will be granted for a maximum period of 24 hours and will allow travelers to stay in the international transit area of the airport, so that they can continue their trip to another destination or to their country of origin.

Cuban television broadcast the statements by the official, who explained that through Executive Decree 19, dated March 8, 2022, the Panamanian authorities decided to establish that requirement for a period of three months.

Although the decree signed by the Panamanian President Laurentino Cortizo indicated the immediate nature of its application, PL points out that according to the Panamanian embassy in Havana, passengers traveling before March 13 will not require any type of visa, but those who have a ticket between March 13 and 30 must reschedule their flight and then apply for a transit visa.

Consular appointments for transit visas will begin on Thursday, March 10, and those people who have a ticket as of March 31 will be seen, and so on, the information from the news agency specifies. The Panamanian embassy has published on its social networks the necessary requirements to apply for this visa, Soberón said.

Due to the announcement made by Panama, a crowd of Cubans gathered this Wednesday in front of the Panamanian embassy in the Cuban capital in search of details about the establishment of a transit visa by the country.

Officials from the diplomatic mission made clarifications on the spot about the new transit visa requirement for Cubans traveling through that Central American nation.