The State Department specified that, once they start, these services “will be limited exclusively to family-sponsored immigrant visa petitions” and confirmed that “Cubans who request a visitor’s permit will still have to travel to a third country, such as Guyana, to be interviewed by a U.S. consular official.” 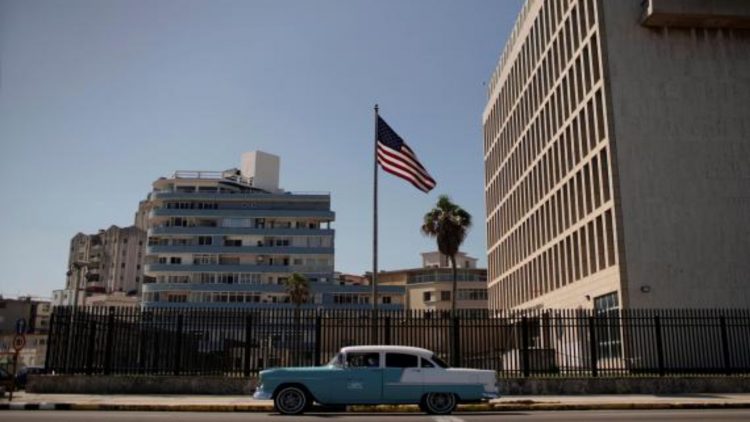 Embassy of the United States in Havana. Photo: AP/Archive.

The United States government reiterated that it is working to restart some consular procedures in Havana, and confirmed its interest in doing so “as soon as possible,” according to press reports.

“We do not have an established timeline, there is much to do, but we are interested in starting to process the cases as soon as possible,” said Emily Mendrala, Deputy Assistant Secretary of State in the Bureau of Western Hemisphere Affairs, quoted by the Prensa Latina (PL) news agency.

According to the news release, a few days after Washington announced the “limited” resumption of visa processing in Cuba, the State Department specified that these services “will be limited exclusively to family-sponsored immigrant visa petitions.”

In telephone statements to the U.S. media, Mendrala pointed out that “the total reopening of the consular services will take place indefinitely” and explained that for the moment the processing of visas in Havana “will remain suspended almost in its entirety due to the significant reduction in government personnel at the diplomatic venue.”

In addition, she confirmed that “Cubans who request a visitor’s permit will still have to travel to a third country, such as Guyana, to be interviewed by a U.S. consular official.”

These statements take place a few days after Timothy Zúñiga-Brown, Chargé d’Affaires of the United States on the island, announced that the Embassy of his country in Cuba would soon begin “the limited resumption of some immigrant visa services, as part of the widest expansion” of its functions, although he affirmed that there is not yet a tentative date for the beginning of these operations.

According to the official statement, the measure seeks to “facilitate diplomatic and civil society engagement,” and while working to achieve that goal “the Embassy of Georgetown, in Guyana, will continue to be the main place of processing for applicants of Cuban immigrant visas.”

Shortly after, Cuban Foreign Minister Bruno Rodríguez pointed out that “when it happens,” it  will be “a step in the right direction” and recalled that “those services were closed in 2017 as the first act of the hostile policy of the (Donald) Trump administration.”

“The consequences have been very damaging for Cuban families and relations between Cuba and the United States in multiple spheres,” he added.

Last week’s announcement took place after previous statements in this direction and is aimed at getting the visa application processes of Cubans with the purpose of emigrating to the United States back on track from Havana, on hold after the almost total closure of the Embassy on the island, in September 2017, due to mysterious health incidents reported by U.S. officials, still unexplained.

The interruption of consular services forced Cubans to travel to a third country, such as Colombia and Guyana, to apply for a tourist or immigrant visa — which would be the one that would now be resumed in Cuba on a limited basis —, with the consequent economic impact for those interested in emigrating. In addition, it has led to a significant increase in irregular migration, both by sea, in often precarious boats, and by land, through long and dangerous routes to the border between Mexico and the United States.

In this regard, a State Department official told the press after the official statement was released that “there are so many people who are leaving Cuba right now (irregularly), and we wanted them to understand that the time is coming when consular procedures will be resumed at the levels that are possible.”