The World Voyager, with 84 German tourists on board, docked in the bay of the southern Cuban province. After a stay of just over a day, the ship will visit Cayo Largo del Sur, María La Gorda and will anchor in Havana on the last day of the year. 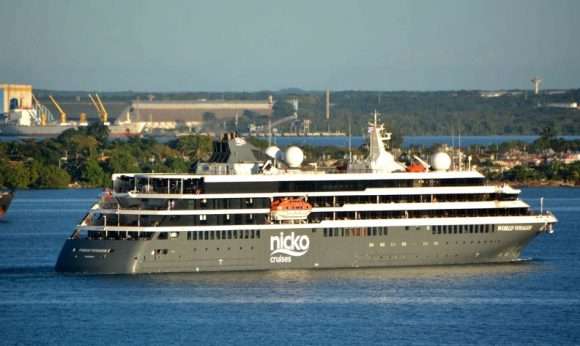 With 84 German tourists on board, the World Voyager cruise ship docked this Monday morning in the bay of the Cuban city of Cienfuegos for a stay of just over a day.

It thus became the first ship of her type to arrive at the so-called Pearl of the South in this tourist season, after the stop caused by the pandemic.

According to official media, during their first hours in the southern city the cruise passengers visited a cigar factory, enjoyed the attractions of the Palacio de Valle and a lunch at the Cienfuegos Club. They also planned to visit the San Fernando Boulevard and the Santa Isabel corridor, in addition to meeting with local artists at the Provincial Museum.

The program conceived for this Tuesday includes excursions to the neighboring towns of Trinidad and Playa Girón. This was reported by specialists from the Havanatur International Group of Tour Operators and Travel Agencies, in charge of the stopover in Cuba of the World Voyager, a 126-meter-long luxury cruise ship operated by the German shipping company Nicko Cruises.

Yosmany Díaz Morrell, assistant deputy director of Havanatur, told the Agencia Cubana de Noticias (ACN) news agency that the objective is to maintain and position the territory as a safe destination, “both for those who come by air and by sea, with compliance with all the protocols and under the strict surveillance of the International Health Control to guarantee the safety of travelers and prevent a re-outbreak of COVID-19.”

After completing its stay in Cienfuegos, the World Voyager will set sail to Cayo Largo del Sur and then to María la Gorda, in Pinar del Río, to end its itinerary in Havana on December 31. In the Cuban capital, cruise passengers will bid goodbye to 2021 and will receive the new year and then continue to the Caribbean.

The ship, built in 2020 and with a capacity for 200 people, set sail from Santo Domingo, in the Dominican Republic, and touched Cuban lands on December 25 through the port of Santiago de Cuba, to mark the restart of tourist activity on the island for this type of ship.

As it became known, the ship is expected to return to the bay of Santiago on February 5, 2022 to start a new itinerary around the Island.

The arrival of cruise ships to Cuba, as well as the increase in air operations with the resumption or establishment of new routes by international airlines, support the purposes of the country’s tourism authorities to receive 2.5 million international visitors in 2022. For the next year, the government projects a gradual economic recovery, and achieve a GDP growth of 4% with the boost being given to tourism, after the effects of COVID-19 in the last two years.