Can you imagine a small private enterprise that contributes to increasing the supply of this precious food in the Cuban capital, based on the waste generated in the buildings where the animals are raised, employing its residents and taking advantage of the excrement for the production of “clean” energy, with the assembly of small biogas plants? 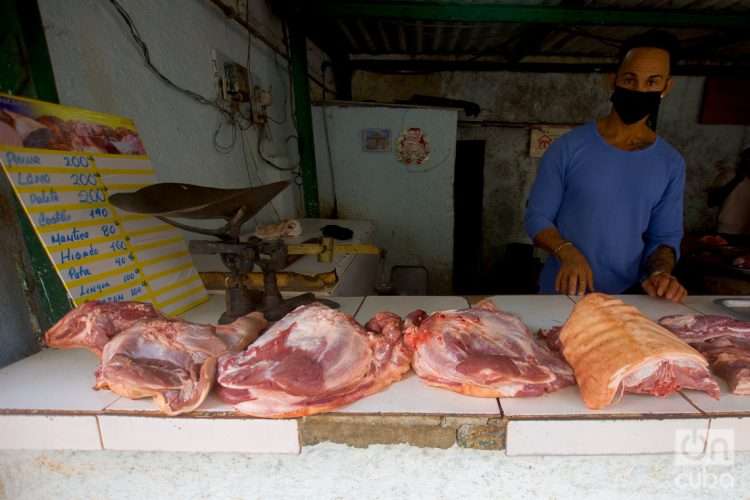 Pork stall in a market in Havana, during Christmas time. Photo: Otmaro Rodríguez.

In the midst of the scarcity and high cost of pork in Cuba, where a pound of the appreciated food has even exceeded 200 pesos — more than 8 dollars, at the official exchange rate —, two Havana entrepreneurs are working on the creation of a MSME for the breeding of what is considered by many to be the island’s national mammal.

Up to there, the news does not seem at all extraordinary, beyond its socioeconomic context, which it is. However, in addition to its — undoubtedly — appreciated objective, the project has attracted the attention of Cuban specialists and authorities for its community conception and, above all, for the setting in which it plans to take place: the typical Havana rooftops.

Azocerdo is the name of the alleged MSME, whose file is already in the hands of the island’s Ministry of Economy and Planning (MEP) and is currently in the evaluation phase for authorization, according to OnCuba. Its two main partners, the brothers Pedro and Cecilio Mantecón, with previous experience in the business of breeding and marketing Cuban pigs and their derivatives, claim to feel “optimistic” with an imminent approval of their enterprise and everything that could result from it.

For now, Azocerdo plans to start on four rooftops in Centro Habana, the municipality of residence of the Mantecón brothers. The buildings were carefully chosen — based on factors such as their surroundings, their construction status and the number of residents in them — from a wide list of aspiring sites, whose neighborhood councils presented their candidacies when the scope and nature of the project became known.

The enterprise will have a community and local development profile, as it plans to employ residents of the selected buildings themselves for the care and surveillance of the animals; take advantage of local waste, which in part will be converted into feed for pigs and, in another part, recycled and sold to the raw materials enterprise; it also plans to use pig excrement to generate “clean” energy for the buildings themselves, with the assembly of small biogas plants.

Pedro Mantecón told OnCuba that he and his brother have been planning the MSME since “the price for pork went over 100 pesos per pound,” and that for this, together with their experience in the business, they appealed to the “long-time tradition” that exists regarding this in the Cuban capital and that they were even documented with a master’s thesis they found during their research on the subject, entitled “The pig in Cuba. Approach to their breeding and development in urban environments.”

For his part, Cecilio said that thanks to his gifts as an inventor and innovator — he was a prominent member of ANIR in his years working for the State — he made adaptations to a biogas plant model for installation between antennas and water tanks on the rooftops, and that he is currently working on a design of hygienic pens, which use recycled water from the buildings themselves, and soundproofing — based on a Japanese project that he discovered on the internet for raising sheep in Tokyo — to counteract two of the most annoying effects of pig farming: noise and bad smell.

“Although,” he assures, “that is never lacking in Centro Habana, unlike pork,” so he hopes that, even without this innovation implemented, Azocerdo can receive the approval of the MEP and even the MINSAP, and it won’t be necessary to use the method of cutting the vocal cords of pigs, which, although known on the island, seems “quite inhuman” and, he reflects, could be punished according to the already current animal protection decree-law.

With these projections in mind, the Mantecón brothers hope to be raising pigs on Havana’s rooftops already in the first half of 2022 and to link up with private slaughterers and state entities for the slaughter of animals and the commercialization of their valued meat and other products derived from the same. And, in addition, they foresee that, if the business goes smoothly as they wish, in a short time it can be expanded to other rooftops of the capital and even other cities, to “contribute to increasing supply and lowering excessive prices,” they argue with a good-natured smile.

Asked about this by OnCuba, MEP sources stated that they were not aware of the MSME Azocerdo project or its alleged evaluation process for its future implementation, and warned about the fact that the news was released precisely on December 28.

If you believed all of the above, know that it is actually an innocent joke and in good faith because the 28th is the Feast of the Holy Innocents, a day in which many people in Latin America play jokes on their friends and relatives, and in which many press media also play on this day on their readers.

In addition, we clarify that OnCuba sincerely respects the work of the MEP, the MINSAP, the MSMEs approved or in the process of being approved and of Cuban entrepreneurs in general, and we hope that in the next year their work can contribute to a desired improvement of the economy of the country and life in general of Cubans.

And if someone, based on this fake note, gets excited and presents a similar or moderately similar MSME project to the Cuban authorities, we make do with their giving us the scoop and then letting us know when the production begins to bear fruit and they begin to lower prices. Do we have a deal then?