COVID-19 caused a 15% drop in air traffic in the Caribbean, a disaster for a region in which tourism in some countries accounts for 50% of their economy and which has generated an unpredictable impact in the Dominican Republic and Cuba. 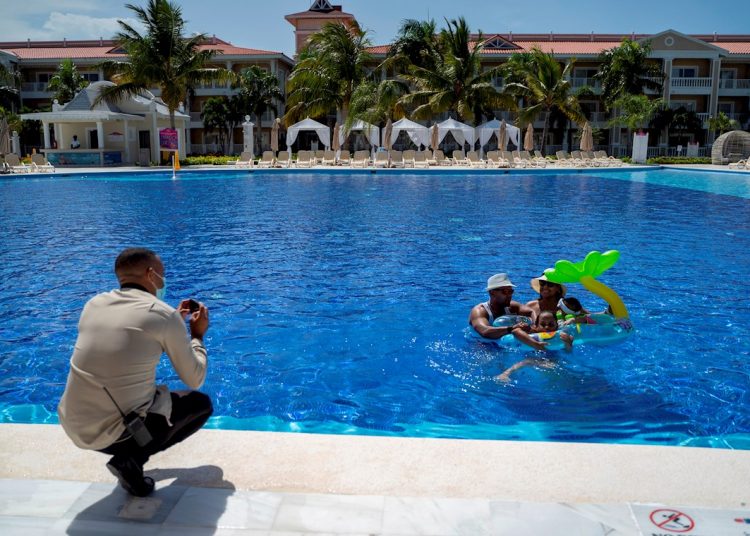 A family in a swimming pool at a resort in Punta Cana (Dominican Republic). Photo: EFE/Francesco Spotorno/Archive.

Cuba has had a tremendous “shock” due to the drop in tourism, an activity that the coronavirus is going to deal a very hard blow, according to UN Undersecretary General Luis Felipe López-Calva, in an interview with EFE.

COVID-19 caused a 15% drop in air traffic in the Caribbean, a disaster for a region in which tourism in some countries accounts for 50% of their economy and which has generated an unpredictable impact in the Dominican Republic and Cuba.

The official, also regional director of the United Nations Development Program (UNDP) for Latin America and the Caribbean, pointed out that the crisis caused by the new coronavirus has had a greater impact on the Caribbean region, since it includes the countries in the world with greater dependence on tourism, which makes it necessary to look for alternative solutions.

How is COVID-19 affecting the tourism sector in the Caribbean?

One of the sectors most affected by this pandemic has been tourism and it has affected many countries in Latin America and the Caribbean.

Costa Rica and Mexico, for example, have a very strong sector in tourism, very affected.

For both the Dominican Republic and Cuba, the foreign exchange from tourism is basic, which is why the current situation has created a worrying uncertainty that threatens their economies.

This whole situation has had a very strong impact on employment in these countries. The health crisis has been contained, but it has excessively impacted the economic sector.

There is no certainty that, in the short term, it will return to normal.

The Caribbean region is one of those that has best responded in terms of health to COVID-19 thanks to the imposition of strict quarantine, blockade and border closure measures.

The countries have followed response protocols quite effectively and this has allowed them to not have many COVID-19 cases.

In the Caribbean, the health crisis has been contained. The problem is that, although we can speak of relative success in containing the health problem, there has nevertheless been an excessive economic impact.

What measures can be taken to prevent COVID-19 from affecting the tourism sector in the Caribbean region?

There has been talk of safe tourist corridors so that people can come with high safety levels to these countries.

No one thought before that to have a strong tourism sector, good hospitals are required because people want to travel to safe places, where if they get sick they have high-quality care, today more than ever.

Recovering the tourism sector now implies very large investments in the health sector because people don’t want to travel to places where there is no high-quality healthcare.

One central aspect of economic recovery is sustainability, being more ecofriendly.

Another factor is making the tourist feel safe in the places they go and that obviously requires very important financing. That’s where the Caribbean’s other Achilles’ heel is, as they are middle and upper-middle income countries that don’t have access to credit.

Which countries are the most affected in their tourism sector in the context of the COVID-19 crisis?

One of the countries that worries us the most, which is small and very vulnerable, is Antigua and Barbuda, because half of its economy is tourism.

We are also concerned about the Bahamas, because the western part of the archipelago was in the process of reconstruction after Hurricane Dorian and now, with COVID-19, a second strong blow is coming.

Obviously, we are also concerned about Jamaica because of its high indebtedness and the limited fiscal space, since one third of its economy is tourism.

You can’t leave out two countries, which are the Dominican Republic and Cuba. We are concerned about the impact that COVID-19 is going to have on tourism and therefore on many people’s levels of well-being.

Cuba has experienced a tremendous “shock” in the drop in tourism. It has been able to control well the cases, although it is deteriorating recently, but in terms of tourism it is being dealt a very hard blow.

What steps can these countries take to prevent the decline in tourism from weakening their economies?

The economy must be diversified in the medium term. In addition, the sea can be an engine of economic growth, beyond tourism. Many value chains can emerge from that natural capital.

In the short term, the tourism sector should be defended through liquidity injections, which allow it to maintain itself, since when a company closes it is very difficult to reopen and, therefore, it is important to maintain resources. For that you have to inject liquidity.

In addition, governments could become shareholders in companies and, when the economy recovers, the government can sell those shares and recover value and the taxpayer can get the money back.

We also recommend emergency bonds for families, but this requires resources and that’s where the international institutions have to play an important role.

What would happen in the Caribbean tourism sector if the border closure continued for many months?

The only solution to this is the vaccine, but once it is available, the stress will go down. Everything will improve, although until then it will not be easy.

The situation will recover, there will be creative solutions such as distance work en masse.

Coronavirus in Cuba: 52 contagions; of them, 24 are “imported”