With the use of Itolizumab, “the cytokine storm pattern produced by the disease caused by the new coronavirus decreases considerably and patients improve their respiratory capacity,” said the Center for State Control of Medicines, Equipment and Medical Devices (CECMED). 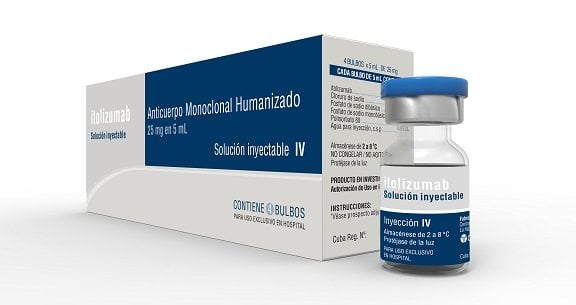 The Cuban drug Itolizumab used in the treatment against COVID-19. Photo: Courtesy of CIM/Cubadebate.

The Itolizumab monoclonal antibody, a creation of the Cuban Center for Molecular Immunology (CIM) that has shown its value in patients infected with coronavirus, was officially approved for use against this disease by the Cuban regulatory authority.

The Center for State Control of Medicines, Equipment and Medical Devices (CECMED) confirmed this Friday the authorization for the emergency use of the drug as part of the protocol for the treatment of seriously and critically ill COVID-19 patients, the island’s media reported.

Itolizumab “passed the preclinical stage of its research and proved to be safe for use in humans, in diseases such as psoriasis, multiple sclerosis and rheumatoid arthritis, which have a mechanism and behavior similar to COVID-19,” reported official television, quoted by the Cubadebate site.

With its use, “the cytokine storm pattern produced by the disease caused by the new coronavirus decreases considerably and patients improve their respiratory capacity,” said CECMED.

Dr. Kalet Monzón, deputy director of the CIM, commented that the approval not only officially authorizes its use in Cuban protocol, but also opens the door for it to be used in other countries. “This result will revitalize the research we are doing on this product and we are very happy to be able to reach this achievement,” he said.

Created by CIM in 1995, Itolizumab was initially used to treat certain types of cancer and autoimmune diseases, but with the arrival of the pandemic, its possible effect on the treatment of COVID-19 started being researched, with successful results. Last April, it was introduced in the protocol for the treatment of seriously and critically ill COVID-19 patients, and later it was also used in moderately ill patients, in a dozen hospital institutions, “especially in the Manuel Piti Fajardo Hospital, from Villa Clara.”

Dr. Tania Crombet, clinical director of the CIM, stated that the results of this drug are “very significant in reducing the mortality rate.” In seriously ill patients, she said, the recovery rate was higher than 80% and in the case of moderately or patients of special care with a high propensity to worsen their clinical condition, more than 95% recovered successfully, according to the television report.

In addition to the achievements in Cuba, its registration is also based on a controlled trial carried out in India, which confirmed the data reported on the island. The trial showed that the use of the Cuban monoclonal antibody contributed to decreasing mortality in that Asian country, which led the Indian regulatory authority to also authorize its use in the treatment against COVID-19.

Cuban biotechnology has played a decisive role in the fight against SARS-CoV-2, thanks to a group of researches that have demonstrated the value of existing products for the treatment of the different stages of the disease caused by the virus. Recombinant interferon alpha 2b, CIGB-258 or Jusvinza peptide and Immunoglobulin, are other Cuban drugs that have been effective against COVID-19 and have contributed to Cuba showing a favorable result today, not only in preventive work, but also in the medical approach to patients.