According to updated data, the incident left a balance of 30 deceased. 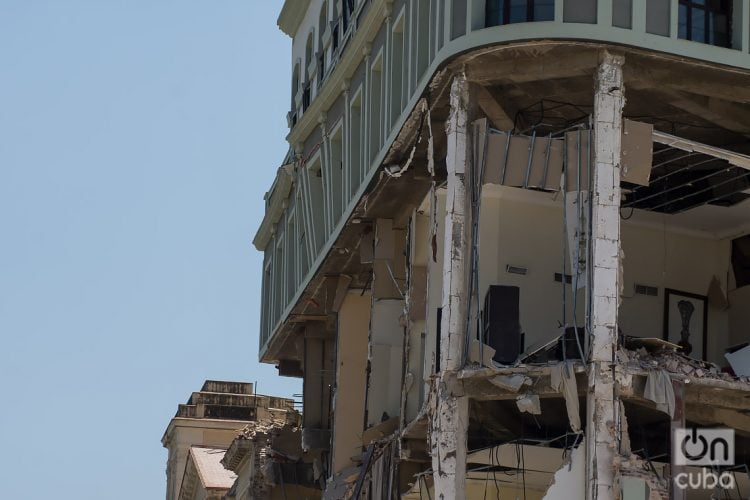 View of the Saratoga Hotel and its surroundings, in Havana, after the explosion that occurred in the place this Friday, May 6, 2022. Photo: Otmaro Rodríguez.

According to information released by the Ministry of Public Health this Sunday, the death toll from the incident amounts to 30.

Lázaro Manuel Alonso, a Cuban television journalist, posted on Facebook that: “This day, rescuers from the Cuban fire department have extracted two deceased. They are now working on extracting a third person and reaching the basement of the hotel.”

For his part, Dairon Rhc, a journalist from Radio Havana Cuba, shared on his personal Facebook profile a video of the moment in which the firefighters found the body of the victim.

According to the Cuban Ministry of Public Health (MINSAP), 81 injured people have also been reported so far, of which 37 are hospitalized and 17 have been discharged.

Rescue and salvage work continues at the scene of the incident. Our photojournalist Otmaro Rodríguez was at the site this Saturday and recorded some moments of the day:

Cuban President Miguel Díaz-Canel exchanged with relatives of the victims of the incident, at the Hermanos Ameijeiras Hospital, in the country’s capital.

Cubadebate reproduced this night an explanation regarding the deflagration that occurred at the Saratoga Hotel:

As explained by Professor Carlos del Porto on his Facebook wall, it was a leak of LPG gas (a mixture of butane and propane) at some point between the supply line (hose) or the receiving source (the hotel’s gas cylinder).

The gas began to escape and concentrated in the interior of the building, reaching values ​​between the LCI (flammability limits). Something that for LPG does not need much volume. In addition, these hotels with many closed premises are ideal places for these concentrations.

Some source of ignition, which could be anything from a light switch to a refrigerator relay, or simply an incandescent source such as a cigarette or match, was enough for the mass of gas accumulated in the hotel to deflagrate. It does so suddenly, in an instant, it ignites and is consumed, but it does not leave behind large fires or large flames that remain, because the accumulated gas is consumed and burns.

All the shock wave comes out and it does so through all the elements that are easier to detach in a building. That is why the intact mezzanines and the collapsed façade or closure structure are intact. Because these facades are of light construction. That is the reason why there is more accumulation of debris in the school than in the hotel itself where the explosion occurred. Construction materials are not the same.

The truck’s LPG tank is intact — visible — because the truck is outdoors where the LPG does not concentrate. Also, it is outside the blast wave exit area. The truck does not have to be destroyed, unless the same wave has no other place to go.

Cuban Ministry of Tourism workers among the victims and missing (13:00)

This Saturday afternoon, the spokesperson for the Gaviota Group, Roberto Enríquez Calzadilla, and the spokeswoman for the Cuban Ministry of Tourism, Dalila Alba González García, informed Granma that 51 workers and 2 restaurateurs associated with both institutions were at the scene at the time of the incident. Of them, 11 died. Thirteen people from that group are reported missing and six are hospitalized, while the rest did not suffer much from the accident, caused last Friday during a gas supply at the facility.

Official media such as Cubadebate and the official profile of the Cuban Presidency continued to report 26 deaths. among them is the tourist of Spanish origin Cristina López-Cerón Ugarte, from Viveiro (Lugo, Spain). As reported by the EFE news agency on Saturday afternoon, the Spanish government will speed up the procedures for the repatriation of the victim’s body.

According to what Consuelo Macías, director of the Havana Institute of Hematology and Immunology, affirmed to Cubadebate, workers at the center and a significant number of citizens of the capital volunteered as blood donors for the victims of the incident, exceeding the figure of 200 donors on this Friday afternoon.

According to data shared by Tribuna de La Habana, those interested in obtaining specialized help can communicate through the following numbers of the group mentioned on the WhatsApp platform:

Luis Antonio Torres Iríbar, first secretary of the Communist Party in the capital, reported that the San José Warehouses would be enabled as of this Saturday for donations to the victims of the incident at the Saratoga Hotel, according to a report by Prensa Latina.