The idea of ​​a first-level theater circuit would have to incorporate systemic thinking that includes certain issues of the infrastructure and operation of the city. 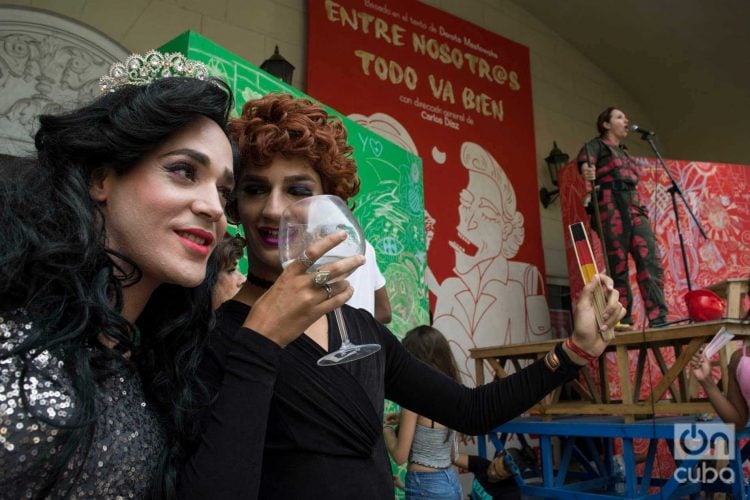 In recent years, people have been talking about the so-called Calle Línea Theater Circuit when referring to the facilities that are found in that centrally located Havana street and its surroundings. The theater facilities located on Línea are the Mella Theater (former Rodi Cinema), the Trianón Theater (also a previous movie theater) and the Raquel Revuelta Theater (called the Cultural Complex) in the space previously occupied by the Olimpic movie theater.

In adjoining areas, such as Calzada between A and B, are located the Hubert de Blanck Theater Hall; on 11th Street between D and E, at the end of the well-known Casona de Línea, the Adolfo Llauradó theater was inaugurated in 2003; at the corner of 5th and D streets, the headquarters of El Ciervo Encantado was located for years; on 13th Street between J and I, occupying part of the Hebrew Community building, is the Bertolt Brecht Cultural Center, with two official spaces for presentations: the Café Teatro, the Sótano, and the Tito Junco Room on the first floor, since 2008. El Ciervo Encantado has its current headquarters on 18th Street between Línea and 11.

From time to time someone talks about the Calle Línea circuit with a view to establishing a hierarchy in the presentation of shows; hierarchy that in the end no one takes care of making a reality; meanwhile, those in charge of the issue of investments in maintenance and development of the facilities also state the circuit in question when they want to justify the use of a budget or the delay in a work. There could well be, instead of a single circuit to think about, several and diverse circuits for the circulation and distribution of the shows, the same at the level of the capital, as well as the main population settlements of the country; a well thought-out and organized programming structure for the dissemination and consumption of the theater product that, of course, also functions as a platform for the presentation of various musical formats and genres.

But, if what is encouraged in the idea of ​​the so-called Calle Línea Circuit are the experiences of Broadway, in New York, or Corrientes Street, in Buenos Aires, it will be necessary to work on such a project with systemic thinking that includes certain issues of the infrastructure and operation of the city. These matters go through the terrestrial communication networks that should be established from various points of the capital with that area of ​​El Vedado in question, the variety and number of gastronomic offer (tending to zero in the area that concerns us), in addition to examining the state of public lighting that, along this street, leaves much to be desired.

The idea of ​​a first-level circuit for the presentation of the shows would have to be analyzed in light of the current cultural policy, since one of the fundamental principles that I recognize in it is free and massive access to culture, including artistic culture, which in past decades encouraged the diversification of cultural facilities in the largest number of territories, in addition to some specific cultural projects and actions such as, in the field of theater specialty, support for the Escambray Theater Group, from its emergence in 1968 and, later, for the rest of the groups that classified within the so-called New Theater Movement (the Santiago Theater Council, the Teatrova, the Guantánamo Theater Council, the Cubana de Acero Theater Group, the Teatro Teatro Juvenil Pinos Nuevos, the Participación Popular Group).

After the creation of the Ministry of Culture in 1976, with Dr. Armando Hart as its head, new facilities were opened for theater presentations on the island. This is the case of the Antonio Maceo Theater, in the former Normal School of Teachers of Havana, in the Cerro municipality; the Casa de Comedias, in Callejón de Justiz, in Old Havana, with its Salón Ensayo (for experimental theater) and its Patio de Comedias, for outdoor performances; the Teatro Musical de La Habana, on the corner of Consulado and Virtudes, Centro Habana, which had three different stages of life from the 1960s until well into the 1990s; very close by, in the former Verdún movie theater, the renowned playwright Eugenio Hernández led a group and, later, on Diez de Octubre, the Gilda Hernández room was opened.

In the theater for children, the room of the National Puppet Theater, located in the basement of the FOCSA Building, on M Street between 17 and 19, in El Vedado, which opened its doors in 1963, was joined by the Teatro Estany Santander, headquarters of the El Galpón group, in the park between San Indalecio, Zapote and Santa Emilia streets, in the Santos Suárez neighborhood; the Sierra Maestra movie theater, with theater performances, where the Ismaelillo Group performed, in Boyeros; while, near the former Liga contra la Ceguera, today the Pando Ferrer Hospital, La Casona de Marianao stood and the restless Bebo Ruiz performed in it and in the premises of the Municipal Library. At that time, and I would say that until recently, each space conquered for stage presentations meant a victory, an advance in a crusade to spread theater art everywhere, especially because based on the new system of scenic administrative organization in Cuba, which emerged in 1989, human resources far exceed the real possibilities of infrastructure.

Perhaps it was precisely a cut in material resources that gave rise to the Calle Línea Circuit, this attempt at a theater showcase in a certain area of ​​El Vedado, who knows? For now, it is an issue not talked much about, not subject to any judgment or discussion, which appears like some others, from time to time, in an environment where transparency and debate are scarce.